Me And Figaro Are Still Married 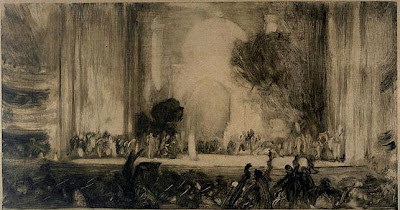 My wife and I and a couple of friends attended The Marriage of Figaro at the local theatre --The Zeiterion-- last evening. It was really, really good. Why is that a surprise?

I dunno. Maybe it's less of a surprise after we took a flyer a year ago and saw La Boheme staged there. We had no idea what to expect then, so we practically had tears of joy rolling down our faces halfway through. We were sitting close enough for Mimi to cough on us. It cost $43.00 Think of that. A real opera company, with a real pit orchestra, best seats in the house; forty three bucks.

Anyway, last night it was the Bulgarian State Opera bangin' away at Mozart. We sat in the fifth row on the aisle. It's as close as you can be and still read the supertitle projector over the stage. The singers were looking right at us when they sang. That's the sign you're sitting in the right spot.

I know enough about the music to hear when the orchestra misses. They're pretty good, so a miss is not a big hairy mistake. It's just you hear them here and there a little slow or too quick to come in; things like that. I didn't notice any singer falter over even one word, or miss a mark. It's a testament to the unlikelihood of finding really good performances in such an out-of-the-way place that I was looking for signs of amateurishness. It wasn't there.

It's a modest theatre, The Zeiterion. New Bedford, its home, is a hundred and fifty years past being anywhere of consequence. It's pretty much a dump. It's interesting here and there, but a really small vinyl sided warehouse for people for the most part. Whatever "vibe" it's got is leftover -- or bad. And the Zeiterion is conspicuous for its lonesomeness, mostly. There isn't an intertown rivalry between New Bedford and Fall River for who's got the best opera house.

It's not gaudy like most theatres; it's really very spartan. But to people who've been watching B movies in a concrete block mall moviehouse closet with your feet stuck to the floor while surrounded by people yammering into a cellphone or yelling at the screen the whole time, it must seem like an Elysian Field.

The opera company is from Bulgaria. It's telling that it's not home grown. Every kid in New Bedford that takes music or dance lessons is learning to screech like Celine Dion and dance like Britney Spears. Mozart ain't happenin'. My own son plays a brass instrument in an orchestra in school. That sort of a program is considered as a kind of enormous luxury in public schools these days, and I'm immensely grateful for it. But you can tell it's kind of ashamed of itself, because the kids are given lame versions of rock music and pop movie scores to play, mostly. They're afraid, I think, to pursue excellence in music because there's no future in it.

As if there's a future in playing school brass versions of Frankenstein by Edgar Winter.
Posted by SippicanCottage at 1:53 PM