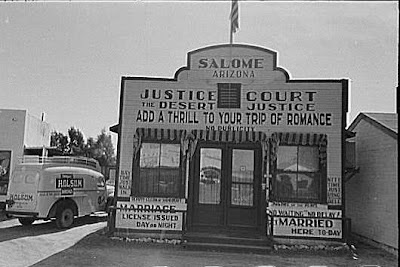 There will be no statistics.

So I'll just shoot my mouth off, if you don't mind. Being married is great.

I'm going to double down now. Being married with kids is even better than great. There, I said it and I'm glad.

I'm not sorta married, either. I'm atomic level married. I don't give a fig for anybody or anything else. I think the penalty for having two women is they should give you a third one. Happy now?

Though we didn't have any money to stand barefoot in an ice chapel built on a tropical beach on a private island having an Elvis impersonator reading the banns for us in a Buddhist/Vegan/L.RonHubbard/Survivalist/Wiccan/Gaian/Druid/ Crypto-Episcopalian mode after proposing on a jumbotron during a guerrilla marketing stunt while shooting a viral video, it was still pretty good. We just got up in front of everybody she knows, and everybody I know, and pledged to stick with one another until we're dead.

We didn't release doves for world peace at the climax of the ceremony that I can recall, either. The more I think about it, not only couldn't we afford any doves, I think we ate pigeons at the reception. Tastes like chicken. Chickens that eat cigarette filters out of the gutter, I mean.

I'm pretty sure we didn't have any children adopted as political statements present at the ceremony, either. Like I said, we were poor. We were in such straightened circumstances that we had to make our own children using only Al Green records and two mixed drinks. We couldn't even afford to leave the lights on.

I can heartily recommend marriage to anybody of a defective character. You know who you are. I can't guarantee it'll work out as well as it did for me and mine. You may not marry someone like my wife, but still be someone like me. That would be bad. You should not own sharp things in those circumstances.

Anyhow, we are the perfect combo, my wife and I. We're the only two people in the world.
Posted by SippicanCottage at 7:54 AM

[Hi, Mrs. Cottage! I just love it when he waxes romantic.]

That's as it should be.