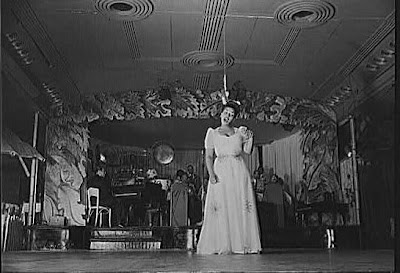 I have a long-suffering wife.

We're going to the opera tonight. We never go anywhere.

That's not exactly correct. We rarely go anywhere. We don't do what other people do, much. It's not stubborn oppositionalism or sloth. No offense; do whatever makes you happy that doesn't panic the horses in the street. We're just not all that interested, and I'm a little strange.

They're getting preachy at my son's grammar school. They're meddling in things that are none of their affair. They have decided to outlaw almost any form of bridled or unbridled physical activity for the kids, as someone might sue. No tag. Then they harangue the kids endlessly about mostly imaginary obesity due to inactivity. We just let our kids run around.

They obsess endlessly about food. They made the lunches so "wholesome" at school that no one purchased them, and so they don't even offer them any more. Me, I would have complained about the rations they offered if I was in a concentration camp. They expected kids to eat it. Message to teacher: you are the only Vegan involved here.

The kids were faint with hunger, so the teacher let them bring a snack. He complained to the parents that the students were eating foods he didn't approve of. I answered him politely that he had overstepped his authority. He told me he wasn't talking about my kid, so not to worry about it. I explained that it was still a problem, as it is the parent who decides, and not only if he decides correctly according to the teacher. Deaf ears.

The children are lectured that they watch too much TV. TV is evil, they are told. We don't have a TV. We have a screen on which we watch entertainments, but it is not hooked up to cable or broadcast feeds. I guarantee you that we are the only house in town of this sort, including the teachers. Especially the teachers, now that I think of it. I'm sure their low opinion of television comes from watching it every spare moment of their lives. Our ambivalence about it springs from our amibivalence about it. It was wry to note that when we tried to discover if school would be delayed or cancelled due to snow this week, we were directed by the school system to turn on the television to find out. Website? Why would we put it there? The website is for preaching about the evils of... television.

We don't go to sporting events much, as they are very expensive, and the athletes are disinterested and thuggish now as a rule. I'd rather go to our son's little league games. We eat out rarely, as it is expensive generally, but mostly because the food is rarely better than we can make for ourselves. It's a colossal time waster, too. I hate traveling, as it is so rare to find a place half as comfortable as our home.

But my wife is trapped in here with three boys. She needs to get the hell out of here. She's not strange, like I am. So where would we go? What would we do? Why, we'd go to the opera.

And real singers will stride to the front of a real stage, and their clarion voices will carry over a real pit orchestra's version of Mozart's incomparable melodies, and pound them into our very hearts. My wife will glow like the moon in the summer evening's sky. We will sit in rapt attention -- a kind of awe, really -- as the story of a sublime and humorous attempt at marriage will twinkle in front of us like a sparkler on the Fourth of July.

It costs less than two weeks of cable. You guys all talk a good game. What the hell are you doing tonight?
Posted by SippicanCottage at 1:48 PM

I damn sure ain't going to the opera. I may be strange too but not strange enough to be caught dead at the opera.

As you can tell, I am just surfing the internets tonight - I worked most of the day and will do a bit tomorrow so not going out tonight.

Hope your wife enjoys the opera; I suspect you are just playing along and will do your best to act like you did too.

You know typically a TV abstainer like yourself would be a vegan too. And no SUV's or pickup truck ever.

Re the school teachers butting in, I should find you the oped I saw this week about what the job of a school is. If I remember, I will.

You know about our current school-hunting dilemma. Today, we got a letter from the county informing us that they have fallen short of the national mark for the fourth year in a row on reading and math. Homeschooling is looking better and better and better.

As it is, we had a family get-together tonight to go over some things. While I would much rather have been playing spades at Ruth Anne's or joining you at the opera, sometimes things just don't work out the way we hoped.

Opera is an acquired taste, like all very fine things. I highly recommend this, which I have listed to twice - you'll be hooked for life:

Perhaps I should clarify a bit.

I do not "abstain" from tv. I'm not interested in looking at it. It is common to have persons who do look at it ascribe a sort of ascetic vibe to my attitude, or reformed drunk kinda thing. It's not something I desperately want to do, but refrain from, as a kind of gesture. I'm just not interested. But I can't help noticing that I'm lectured on its evils by people who watch it all the time. I sometimes rig up rabbit ears to watch football games. Other than that, I never have the desire to look at it.

Likewise, the food/obesity thing. People with insane paranoid obsessions over food and obesity are always lecturing me about it. I couldn't help noticing that the teacher that tried to lecture parents about food is a little doughy. Mind your own business.

Also, I've mentioned two teachers there, though that is not clear. The vegan was a insane harpy, and her insanity manifested itself in myriad ways.

The snack meddler is a very good teacher. He's just lost his perspective about what's appropriate.

We tried catholic school for a while for our older son, though we are not catholics. The rigor of catholic school education of my youth is gone. It's public school in a ratty building. My son brought home homework with Kwanzaa in it. (from a Catholic School!)We put him in the public school. The idea of never letting him out of the house to be educated seems too insular to us.

The opera is my idea.

I'm coming to this party late, but Saturday night my wife and I flew several thousand miles from one side of the continent to the other. And you call going to the opera a night out?

I don't remember the in-flight movie, but I'm reasonably sure Deuce Bigalow II would have been an improvement over what we had. But I didn't watch the movie. Instead I listened to Ella Fitzgerald for several thousand miles. (I think my wife listened to old madrigals or the like, but I'm not sure.) I still think I win.

Wait a sec. Are their NEW madrigals?

I think most of the singing on the montage interludes of "Butch Cassidy and the Sundance Kid" qualify as new madrigals, now that you mention it.