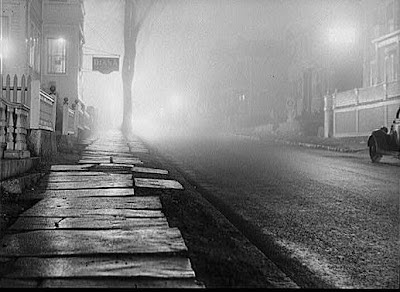 Why do your footsteps sound that way in the fog?

In the broad daylight, they get swallowed up like Jonah. They just mix in with the clatter of the cars and Clark's old wagon and the kid with the roller skates and the ding ding of the faraway trolley. At night in the fog, they ricochet around and I hear them like gunshots. They are mine, and another's too.

He's followed me around in the fog these three years. I can't scrape him off in the Bethel or the tavern or the little place with the greasy balls of opium from Marracech. I'd beat my head on these granite flags if I thought it would do any good. He's there but drowned out all day, every day. But it's the fog that puts him on your shoulder, and we dance together down the street like ball-room winders.

A man will go over the side from time to time, and no mistakin'. I've been fished out twice myself. You stand there shivering and your mates have a jolly moment and you work the rest of the day soaked to your tallow as a reminder of where you might be sleeping. But there is no sleep there, if the fog is any measure.

The man's hand was in mine. Rough as his language. His whole wrist. It was like I could feel the blood pumping through his veins. I could feel the tug of the wake, trying to yank him under the foam by his boots. But I had him, sure. His big, stupid, moonpie face, with thirty winters written on it, looked up at me, glowing white in the fog. And then I sneezed, and I found I had two hands on the rail, and he was gone.

A man that goes over at night has no right to hope to be saved. One hand for me, and one for the boat doesn't cover it at night on the Shoals. It's two hands for the boat at night. I threw everything on deck over the side and yelled to raise the dead and we had that boat turned hard about in a minute flat. Long gone in a fog. And we heard him calling. But in a fog, where does a noise come from? I still hear him now, and see the look on his brother's face, measuring me there on the deck when the voice faded.

And like always there are two footfalls for every one now in the fog. I wander down the hill, the granite slabs of the sidewalk rising up and appearing under my feet like continents on a map. This road is busy in the early day, but we're all alone here in the fog now. I'd watch for a car to come and hit me, but I could lie down here and wait all night. Why bother to look? You can just drift across the lanes.

I always loved the sound of the chestnut plank under my foot. You can feel the pier shift a little with the slop of the slack tide. It's like the world breathing in and out.

I walk to the end, and reach out for his hand one more time.
Posted by SippicanCottage at 8:48 AM

That was just haunting and beautifully written.