What It Was, Was Football 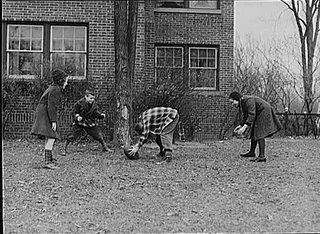 When we went out to vote on November 7th, my wife and I had to drive by our son's elementary school. We were mildly amused to spy him, out for recess, playing football in the schoolyard with his classmates.

We parked across the street and watched for a few precious minutes. Since we were not a butterfly, or a jet contrail, or a candy wrapper, or a penny, he didn't notice us there, so we got to see him in that rarest of settings: "somewhere else," without his parents or guardians present.

The football activity was hilarious. It alternatingly resembled an algae bloom and an ayatollah's funeral-- first a kind of milling around in an amorphous blob, then a kind of wild melee over a leathery old totem. We watched them drift back and forth for a pleasant minute, with the odd missile launch of the forward pass rocketing rudderless out of the scrum and landing any old place but that most rarified of targets: a teammate.

It was wry to consider that playing tag is verboten at his school. I'm not joking.

The school is getting comical in this regard. They were terrified of the food the little ones were eating, so they tinkered endlessly with the school lunch menu to make it so healthy that no one purchased it anymore. Now everybody eats fluffernutters they bring themselves.

They built an elaborate and very expensive handicapped playground. That's a kind and thoughtful gesture. But it is merely a gesture, as there are no handicapped children to enjoy it. There just aren't that many children of any kind in a little town like ours.

Tag isn't allowed, so one of the kids brings a football, and they play that. And football isn't banned, because no one thought of it yet. And the absurdity of allowing mobs of pre-teens to chase one another if one is holding a ball, but not if their hands are empty, seems to be lost on the school administration. At least for now. And I, for one, am glad of it.

I'm not as worried about my son being injured playing football as I am in contemplating the little straitjacket world he's being fitted for. Those children decided on the rules, supplied their equipment --a ball-- and played their game without any adult supervision; and I saw a lot less kvetching among them than at any organized sporting event they participate in. I'm leery of them being told that someone will always tell them exactly what to do, and simultaneously unerringly protect them from not only from harm, but hurt feelings. One aspect of that tandem of supervision is repugnant, and the other unlikely.

I'm living in a strange world where people for whom I have no regard draw finely calculated and ultimately meaningless distinctions about everything down to the scope of activities allowed for pedophiles to roam the earth, at the same time they ban children playing tag in the schoolyard. Such distinctions are meaningless because anyone who is prepared to commit a great offense is not concerned about the rules governing small ones.

I dread the day, which is on the horizon now, not over it, when I'm forced to tell my children that the only sensible course of action is to ignore the rules, as there are so many of them that they become gibberish. And what the hell, the rules only seem to apply to those who wish to live worthwhile lives anyway --who never needed them in the first place.
Posted by SippicanCottage at 9:16 AM

I may have spoken to you about this already, in the hiatus I took from law school to work for you - it was the chief reason I went to paint and build things for a year rather than return to law school - but those "people" that you mention actually think that the law is a science, much like chemistry or physics, wherein if you get the right verbiage, you will always get the right result. I remember the derision with which a torts professor dismissed my opposing viewpoint about an appellate court's decision in a case where someone whipped a metal length of cable over a streetcar's electrical conduit (with the predictable results), as if there was no chance the justices could have gotten it wrong. Human nature, despite all the professionals - legal, social and otherwise - who say otherwise, is not predictable or immutable.

Both of my broken noses (I guess I should say, both times I broke my single nose) were on the schoolyard playing tackle football with no supervision and no pads.

I also suffered a couple of concussions, caused someone else to get stitches, been there when someone else broke his leg (causing football to be banned at my Junior High as a recess activity) among other moments of unsupervised mayhem

Those were the days, and it saddens me to think of kids who will never experience that unsupervised, unstructured, kid centered and kid directed play.

As to the other thrust of your post, the creeping paternalism and legalism on public school campuses . . . , what's the right word?