There's An End Table In There Somewhere 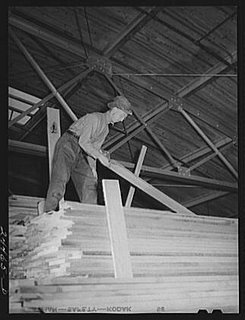 I went to the lumber yard this week. But like calling the garbage man a "sanitation engineer," calling it a lumber yard is not the preferred nomenclature at this point. They're my "hardwood supplier."

All highfalutin' terms for simple things seem as thin as dishwater to me. I don't know why people abandon good solid terms for their businesses and walks of life and adopt gibberish instead. There's nothing wrong with "hardwood supplier." But it's got no anima, like "lumber yard" did.

I remember Ma Bell. The telephone company used to be named after Alexander Graham Bell. They busted it all up when we all decided we'd like more than one phone per family, and they didn't all have to be a big black corded rotary that rang like a four alarm fire. Why in god's name didn't one chunk of the business keep that name? The chunk that offered service where I live called itself "Verizon." I imagine they did a lot of research into figuring out if that sounded up-to-the-minute cutting edge to a prospective customer. Then they hired Darth Vader to mispronounce Verizon as Vorizon, and added to the "I'm not particularly any sort of word" vibe.

Trust me; if my name was Chippendale, that's what I'd be calling my furniture -- not Furnizon.

Ahem. Anyway, I hate going to the lumberyard. Nothing personal; I hate going anywhere. It interrupts what I'm doing making furniture. If I could just have everything delivered to me, I would.

But I'm not buying widgets. It matters a great deal what I buy, so in general, I gotta go look at it. That's a foreign concept in a lot of walks of life now. If I was buying a computer, I'd do it at two AM on the internet. It was made in a factory. If it looked any different than any other one, there'd be something wrong with it.

There's something wrong with most everything I buy at the lumber yard. That's the point.

Those magnificent tiger stripes in the maple? The spalts and birdseyes? All those marvelous whorling medullary rays in the white oak that make each piece of furniture worth looking at? They're defects. The wood would look like pale pink or tan plastic with railroad-track-straightaway grain, evenly spaced, the entire length of the boards if it didn't have any defects. And if it looked like that, I'd buy it also -- to paint it.

So here I am. A madman, looking for beautiful defects in a pile of sticks. The boards are as rough as language at a longshoreman's tavern, and sometimes as crooked as a politician; they're as dirty as Madonna and as heavy as a child's head when you carry them in from the car after a long trip. It's a rough estimate you're making, when you look at a pile of wood that the average person might mistake as suitable for a woodstove, and know it's worth the $10 per square foot they're asking for it. Because there's an end table in there somewhere.

Michelangelo Buonnarotti Simoni made the famous observation that his statues were inside the blocks of marble before he started. All he did, he said, was chip away until they were revealed.

What a jerk, or a genius, you might think. But he wasn't saying it's easy, to rub it in to the rest of us, or how marvelous he was to think in that manner. Great men often talk about their affairs as if they are no big deal to them. I don't think that's what he meant.

I think I know what he means, if only imperfectly. There is a kind of thrill in finding the raw material suitable for an excellent outcome. You can picture the roughness stripped away in your mind's eye after a while. You see potential. The potential is in yourself, and you have spotted an appropriate medium for the expression of that potential. You've dragged a boat a long way overland and discovered a body of water.

As I said, I was at the lumberyard. Downes and Reader in Stoughton, Mass, if you must know. You poke through the flatstacked boards like a raccoon --or a lover. I found an odd pile of things that didn't belong anywhere else. Sounds like the place for me.

I knew what it was, in the rough, without asking, without labels. Curly Red Birch. Flame Birch, some call it. The last time I bought Curly Red Birch, George Bush was president. The other George Bush. I built my then theoretical first son's dresser out of it. He's eleven now. He and his little brother could reduce a piece of IKEA furniture to kindling (does IKEA furniture burn? I'm not sure) in a lazy half hour. He's never been able to put even the smallest dent in his dresser.

Flame Birch. It's the king of all woods. Hard as a banker's heart. Irridescent. Rare as compassion in a hockey fight. It'll kill at least one tool I have when I run it through them. It cost more a Kennedy's bar bill.

But I had to buy it. There was furniture in those baulks of wood. I could see it. All I had to do was figure out a way to let it out.
Posted by SippicanCottage at 8:03 AM

I can't think of anything remotely analogous in my own life to this process you describe. People's lives really are different.

Did you shop at similes 'r us today, too?

Hey: If you were to make "Chippendale's Furniture", would you create a secret pouch in all your drawers for the folded dollar bills?

At work, the Pesonnel Department has changed its name so many times in the past two decades that no one seems to know the current name, unless they work there.

I know it was until quite recently 'Human Resources' or some such, but it's different now, and I don't know the new name. as a result I can't find it in our directory or on our intranet. So I called the operator and asked for 'Personnel' and she connected me to whatever-it-is-this-week. (The Intranet doesn't know for similes.)

God save me if I ever have to find the Audio-Visual or Computer Assistance Departments. What are they now? Where are they?

"Human Resources" conjures up images of Soylent Green, don't it?

Trust me; if my name was Chippendale, that's what I'd be calling my furniture -- not Furnizon.

So why is your furniture named "Sippican Cottage" instead of "Harrison's"?

"Human Resources" conjures up images of Soylent Green, don't it?

As someone who works in the HR department of some mega-conglomo-multi-corporation I can tell you there's a good reason for that. I can't tell you what it is, unless you want to come down to the processing plant-er, office- but it is a most excellent reason indeed.

I live in a town formerly called Sippican. I live on the banks of the Sippican River. It's a cottage. A sort of a Sippican kind of a Cottage. Cottagey, really.

I don't like the look of the rotating knives in your office.

Um, yes. I meant Sullivan. I have no idea where the Harrison came from. Probably some forgotten TV show.

And I guess you can't use Sullivan.

Regardless, thanks for the exlanation.

What I would like to know is…what're ya usin' the flame birch for??

what're ya usin' the flame birch for??

It's an excellent question. I don't know. Sometimes you find these pieces of wood and you put them aside for something later when you have a moment.