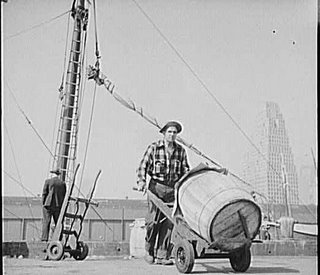 There's a great joke in one of P.G. Wodehouse's Jeeves and Wooster stories.
Wooster, amazed at some obscure thing Jeeves knows, asks: "Is there anything you don't know?
Jeeves considers for a moment, and replies mordantly: "I really don't know, sir."

I visit various salons on the internet -- the culture and information kind, my internet hair is fine. People are always shrieking in there at one another about some real or imagined slight they feel about their political persuasion. And someone comes across with some sort of nuclear weapons grade comment that shows what a low down dirty thieving warmongering totalitarian babykilling something or other somebody or other is.

And the rejoinder? Link, please!

Ah! It doesn't exist unless it's on the internet. Cut and paste that sucker right in there, and you've proven it.

I've got news for you. No it doesn't. The internet is a sewer, and you guys are trying to salmon fish in it. There is no "fact," never mind opinion, that I can't find on the internet in five minutes flat, with annotated footnotes. The fact could be aliens made crop circles to Donald Rumsfeld shot Kennedy, doesn't matter, it's out there. I once saw the text droppings of two different very agitated persons arguing whether Ahmadinejad was a highly placed operative in Khomeini's hostage gathering Iran back in the day. I'm not interested in such things, really, but the person who was defending (!) the obviously loopy Iranian midget millenarian seemed to be saying: cut and paste a picture of Ahmadinejad doing something bad right now, or he's Gandhi and Nasser's love child.

I had a picture of Ahmindinejad, in a book on my desk, his arms linked with Khomeini's other henchmen,on a platform in Iran, getting ready to make Jimmy Carter watch Ted Koppel every night until Ronald Reagan was elected. But it wasn't on the internet, so it didn't exist. I certainly wasn't going to put it there. I'm busy, and I don't care. But it illustrated to me that there are plenty of things that are not on the internet that are very, very, real. And in greater measure, plenty of things all over the internet that just ain't so. Smoke over Beirut, anyone?

I don't know why I know what I know. None of us does. I do have a tendency to know things other people do not, because I'm a little odd. On top of being odd, I'm an auto-didact, so I've gleaned odd stuff, while going about it in an odd way. That's like odd cubed. I'm not a catalog, I'm a Secret Santa, as it were.

"Lower the Boom." I saw that used the other day, and there was some discussion about its etymology. In my humble opinion, the etymology offered is wrong.

Everybody comes at etymology from their own point of view, if you let them, just like cut and paste oratory on the internet. Sometimes you can trace etymology right to the source, but that's rarer than you might think. Someday etymologists will search for the reasons "ever" began to be spelled "evar."

I always refer to my hoary old copy Wentworth and Flexner's Dictionary of American Slang. The internet is great for neologisms born on the internet, but that's about it. Here's what the internet says about "lower the boom"

LOWER THE BOOM - "to reprimand harshly, to stop someone from doing something. A boom is a long spar or pole used to extend the bottom of certain sails; or, it can be a spar that extends upward at an angle from the foot of a mast from which there are suspended objects to be lifted. Derrick, the famous hangman during the reign of Queen Elizabeth I, devised the prototype for the ship's boom - a hoist that still bears the inventor's name. Ashore, lowering the boom on someone means to call that person harshly to account. This can be done severely enough to leave one's ears ringing." From "When a Loose Cannon Flogs a Dead Horse There's the Devil to Pay: Seafaring Words in Everyday Speech" by Olivia A. Isil (International Marine/Ragged Mountain Press, McGraw-Hill, 1996)

I don't think they know what they're talking about.

Boum is an old Dutch word, related to beam. It has something to do with a tree limb. But if the expression lower the boom is related to the boom on the sail hitting you on the top of the head, why are the derivations so recent? People have been getting hit on the head with a boom for thousands of years. Why all of a sudden in the twentieth century is this expression for getting clobbered in fashion?

Because it was something else, and I know it. I think I know it, anyway. The part of a crane or other hoisting device that swings around to drop that famous hook is the boom, too. And I've stood in a ditch, and on a dock, and in a loading yard many times, and signaled to the boom operator to "Lower the boom" thousands of times. You use hand signals, as the operator of the boom is far away, and the surroundings are noisy anyway.

To signal "Lower the boom," you extend your right arm straight out, close your fingers, and extend your thumb straight down. Death to the gladiator. Lower the boom. Contemporaneous with the introduction of such signals to cargo hands on the docks -- and stevedores are the greatest treasure trove of American slang outside the military.

Now it's on the internet. Someone will cut and paste it somewhere, and I'll be right, whether I am or not.
Posted by SippicanCottage at 9:55 AM

I second it, so now it's verified. And I remember reading it somewhere else once, by an author now obscured from memory, so I have a reference. Somewhere.

OK, so now I can refer to your referral, which means there's three of us, at least: me, you, and me.

Too bad my father is gone cause I am sure he'd know. He served with Army quatermasters and stevedores in WWII in Oakland and the Aleutians. And he was extremely well read.

But, if it's a 20th century derivation, as you say, the nautical origin could be apt since so many Americans in early 20th century arrived here by boat or their parents did. Think about this- during a 3-4 week transatlantic boat ride, the emigrants had little to do but observe the deckhands, and ship workings. And that is where they could have picked up the "lower the boom" phrase.

I have to say your blog is a welcome change of pace to other blogs. And lastly, you sound like Bill O'Reilley who complains that anything can be put on the internet. The horrors!

Thanks! Except for the Bill O'Reilly part. That left a mark.