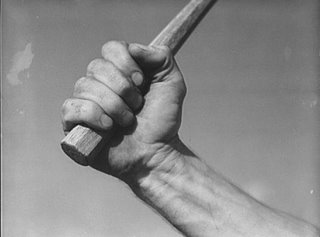 Bring me the persuader.

My beloved Uncle. He's the liveliest of men. Strong as an ox. A tender heart. Fearless. A quiet temperament. Funny. Forte is a word that does not translate properly. Forte.

I was younger then. We were fixing to lift a freshly framed wall. It couldn't be done, really. 2x6 sticks, thirty odd feet of it. Sheathing on. There were not enough of us. Three of us. But he said it could be done, and though he must have looked at our rangy frames and compared them in his mind's eye to his own bearish self, he did the arithmetic in his head without mentioning it. Whatever they lack, I will make up myself.

Sometimes you need someone to simply say it will be done. Not that it's possible; that it's inevitable. A will to counter the forces arrayed against you. People will follow such a man. In a desultory and tentative fashion at first, but without hesitation later. The noisy leader gets the enthusiasm right out of the gate, and it fades by the first pole. Go to a marketing convention. It's Triumph of the Will in the hall, and morphs back into Little Bo Peep by the time they hit the lobby. You can only show. Telling doesn't last.

You tilt it up. Only half of the weight is in play. Half is plenty. You cannot fail. The wall will fall on you if you do. Your mind is often sharp under such conditions. You feel like your ancestors in a cave or a tree. Your senses are heightened. You are aware of the slightest breeze. You hear a tiny sound, and your mind has only two slots now: OK, and Danger. You never know this feeling in regular life unless you are in a fight. And who fights? Only men that lift walls.

But not my Uncle. He is too formidable to look at, and too pleasant to talk to, to get in a fight. And he laughs easily. He is chuckling as we try to lift the wall. It can't be done. Let's do it.

A 2x4 is called dimension lumber. It is 1-1/2 inches thick, by 3-1/2 inches. It is called a "two by four" as a reminder of its size before you dry it, and it shrinks. All problems are like a 2x4. You refer to them as they appear in theory --big; but they are slightly smaller by the time you get your hands on them.

Once the wall is at a forty five degree pitch, the weight diminishes on the lifted end. Surely this is so, my Uncle knows, and we say. We are educated, and he knows things. We talk, and he does.
Push up, now. Hard.

There is a moment when you are nowhere. It is not accomplished, but you cannot go back. You gather yourself, and arrange your bones and your sinews and your flesh, and you flip the switch in your mind to: NOW.

And the hard work was already done. Your Uncle knew that because he'd done it so many times before. The hard part was getting through the part he coaxed you along saying: It's easy.

Every inch you raised it made it easier, until you just had to guard against pushing it over into the yard. Imagine that. Back off, tiger. The wall's up.

You had cut the metal strapping -- it holds the framing lumber delivery-- into strips. You nail the strip to the subfloor, and to the bottom of the "plate," the horizontal run of framing lumber. That is the fulcrum that holds the wall in place, while you lift with all your might against it. One of them snapped.

The wall bulged out there. It was a twenty foot drop to uneven ground on the outside of the wall. The thinkers got busy.

Hand me the persuader.

You know he would call the sledge that. He sat in the window opening, legs inside, the rest hanging in the ether, held the frame in his left hand, and swung that sledge out and up and over his head like mighty Thor, and brought it down on that spot as sweet as you please. I had needed two hands to pick it up. Nail it.

You guys hungry? You're always hungry.
Posted by SippicanCottage at 9:13 AM

Great story and reminds me of when I worked for a bricklayer in college. I was shoveling cement into a pan on a ledge about seven feet up. I could barely reach it and I told the other laborer on the ledge to make sure it did not tip over back onto me. But he didn't and it did. Struck me right in the back of the neck, almost knocked me over. I felt my neck and couldn't feel that bone that normally protrudes from the back of one's neck.

The boss, Mr. Duff, a tough old bricklayer had some advice. Let's go to lunch, he said. So we did.

My Dad visited today and I showed him the lumber yard essay (he used to teach woodwork at high school, and has done joinery - including some fine furniture, and a superb garden hut - all his adult life). Loves wood, hoards nice salvaged pieces.

He read it slowly and carefully, top to bottom, liked it - saw the catalog, thought your furniture looked beautifully made. Praise indeed!

aj- The uncle this is written about was a mason for most of his life. I worked for him for a little while. He could wear out a phalanx of Sisyphuses. Needless to say, he wore me out, too. But what does not kill us makes us stronger, is it not so?

Mr Duff and my Uncle think so.

Editor T.- Hello to your father and you. Thank you.

And now I have a message just for your father:
Your son has fallen in with bad company.