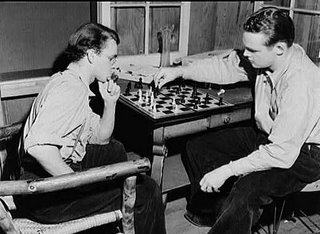 He's got a kind of internal gyroscope going: one that keeps him from behaving badly. He is occasionally frantic and silly, like all boys his age are wont to be, but I've literally never seen him be deliberately unkind to another person. Conversely, he's almost literally stunned when anyone is mean to him; it's as if someone from another planet is being presented to him, a planet with strange and unpleasant customs. He doesn't get his inner light from me, I'm as mean as Cuchulain with a pebble in his shoe. Must be his mother.

At any rate, he plays chess. He learned on my old 486 vintage computer, when he was barely out of diapers, by moving the pieces on the virtual chessboard with the mouse. The game would automatically place your piece back where you started if you tried anything non-standard, and he learned the moves, hit or miss, by paying attention to what was not allowed. Just like life.

I started playing with him when he was four. I was always black, and removed my queen from the board before we began. And then I'd slaughter him.

I gave him the old books I learned from all those years ago. J.R. Capablanca, the Cuban chess phenom guided him on his musty pages, as he had me. J.R.'s been as dead as a pharoah for half a century. I'd slaughter him less severely.

They decided to try a chess club at his school last year. He came home after the first session, and was kind of subdued. I sensed a problem.

Did you play chess?
Yes.
How many games?
Fourteen, I think.
How many did you win?
All of them.
Did you play against all your friends?
At first. Then the teacher. He say's he's going to get a book and study up for next time.

We don't play often. I work a lot, and spare time is hard to come by for both of us. We returned home from the Thanksgiving trip, and he and I were rattling around the house while his mother and brother slept. There was a tremendous rain and windstorm going outside, and I figured the lights would wink out any minute. I was weary of the sight of anything electronic. Let's play.

He beat me. He made no errors. I baited him with many potential possibilities to take a piece and lose the game. He ignored them. I clawed and grabbed to the end, and took multiple queens from him. He kept giving them up, sometimes just for a pawn, and got another one. He was like an anaconda. He was ahead from the start, and leveraged it inexorably into a win. He did not exult. He had a look of shock, almost. A kind of gratification tempered with awe.

I don't remember the last time anyone beat me at chess. I stopped playing because not many people were interested in playing, and even fewer in playing and losing.

So now I am faced with a problem. If I play black without a queen forever, I may never win again.

He is a superior sort of person than I, my son. It is gratifying for a man to roll that idea around in his head. Not smarter, exactly. Intellect alone does not make a man valuable to his brethren. He has that rare combination of intellectual acuity chained to a thoughtful and pleasant personality. He is immune to evil.

I put him to bed. I thought for a long moment, alone in the dim light from the embers of the evening fire, and threw the black queen in the fireplace.
Posted by SippicanCottage at 10:48 AM

What a stunning and mysterious last paragraph!

I had just finished reading "He Won" and was staring off into space when my wife walked in to see about dinner. She said, "You've got a funny look on your face. What are you thinking of?"

With that, I got this big, tight-lipped smile on my face that people sometimes get, and I looked down as I shook my head gently from side to side.

"It's hard to explain," I said. "It's got something to do with my father."

I remember being a kid in high school English talking about rites of passage and the standard son-defeating-the-father scenario in a million permutations. And it all sounded so correct, yet beyond my grasp.

I really want to meet this young man.

Thank you. Wonderful story. Reminded me of something that I had long forgotten, and I rushed to write it down to share with my own dad tomorrow. Those memories are increasingly important right now. Thanks again.