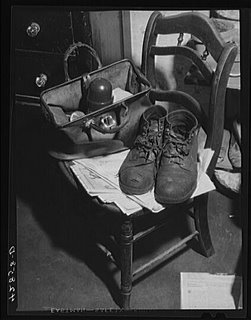 We are instructed to walk in another man's shoes before we judge him. I have enough trouble walking in my own shoes, and so leave the judging to others.

In a way, saying that you cannot understand any man, unless you more or less are him, is silly. No one understands anybody. Fine. Now what?

There is a shared thread to our lives, no matter how disparate the people and cultures on this green earth are. We can know other men -- a little.

If there was ever a person a man should be able to ken, it would be his Father. Why do I not know mine? I am the most like him, if appearance is any guide. I don't know him at all. Maybe that just means I don't know myself. I don't know that, either.

He is very old and frail. His job is to make it through the day, now. I bring him to his doctor from time to time. I am always in a rush to return to work. He likes to get a donut and coffee when it is done, and we linger for a long moment before I return him to his home. We speak of everything and nothing.

I asked him about my Grandfather, about whom I know an extra portion of nothing -- although my youngest son carries his name. My Father answered in an off-hand way:

His middle name was Joseph. He was in the army for World War One, but in what capacity he did not know. He used to go to Hot Springs, Georgia, to play minor league ball. My father thinks that is where he got his love of baseball, as my grandfather would never miss an opportunity to listen to the baseball game on the radio with him. Like many of his brethren, he was both kind and tough. My Father would go to the American Legion meetings with him as a child, and they would clean the hall when it was over to make a few pennies. They were very poor, and my father had six sisters and a brother. There were two stepbrothers, too.

He worked for the City of Boston, in a parking garage for all the city vehicles. My father remembered the exact address, although it has been 69 years since he was there. He said he would visit him there, and my Father could remember the fine soot, tainted with lead from the gasoline, settled in little drifts and riming the windows like some black frost from the underworld.

When my father was about sixteen years old, he heard his mother shriek, and ran to help her. His father was there, dead in his chair in his bedroom, clutching his chest where the heart attack had done its work. It was 1937. In 1938, Boston began giving insurance pensions to the families of city workers who died. After 1938.

My father sold newspapers on the corner, and gave the money to his mother. He said he sort of looked for his Father in every man he ever met after that. He never appeared.

My Father needed to put his hand in mine yesterday, and I helped him to walk to our destination. He's barely a shadow now, though his mind is not dimmed. He said I was a comfort to him, though in my heart of hearts I know I have always been a poor son.

I don't know him.
Posted by SippicanCottage at 9:32 AM

We never really know our fathers, I think.

It's right for us in one sense to feel that we can never do enough. How can you ever do enough for the man who gave you life?

You know yours better, and do more for him, and give him more honor and love than do the vast majority.

And more than being cared for, what most dads want is to see their sons turn out well.

You are a good son.

Good thing I have my water-resistant mascara on today.

I second the good pastor. You are a good son. And you're raising good sons.

It was into your hand that he put his hand when he needed help, not another's.

It is with you that he shares coffee and a donut, and speaks "of everything and nothing," not a stranger.

As he said, you are the one who is a comfort to him, not someone else.

Listen to your father: you are a good son.

I think we're all poor sons (or daughters), in the same way we are all sinners.

I have a dear friend who is the mother of 3 young children. She is very grateful that they are not little obsequious suck-ups, with no interests of their own. She also hates that they don't always listen to her and that they regularly display their independent spirit. Aware of the contradiction, she is on the whole glad that the independent spirit wins out, however difficult it makes her life from time to time.

Your father would feel he had failed with you if you did not have your own interests, your own work and family to get back to. But of course you know that already.

And the cat's in the cradle and the silver spoon
Little boy blue and the man on the moon
When you comin' home son?
I don't know when, but we'll get together then son
You know we'll have a good time then