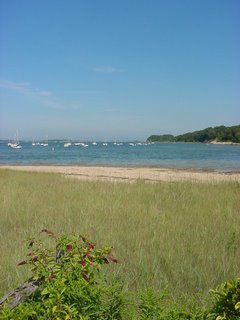 I know I'm not supposed to be, but I'm a terrible Anglophile. My pater's name is Ó Suileabháin, after all. My ancestry is obscure, but it wouldn't take much effort, I'm sure, to trace it back to Sullivan Beare, skirmishing with Henry VIII, and "hold paper" on the Empire, as it were. A long while back, I was present in a place where darts were thrown and Guinness was pulled, when an IRA sympathizer tried to pass the hat to "pay for some treason." A man that said he knew someone killed when Lord Mountbatten was assassinated threw hands with him. I threw in with the Britisher. Michael Collins and Churchill couldn't have done any better. St Patrick was a Britisher, after all.

Anyway, the internet tide brings in all sorts of interesting people, and yesterday, commenter "editor theorist" shared a bit of his thoughts about the similarity of our Chatham to his Northumberland:

Yes - far views. The tourist board here describes Northumberland (northernmost English county, bordering Sotland) as 'land of the far horizon' - and that is a great appeal of hillwalking in the Cheviots. The coasts have a similar flat expansive quality to that picture of Cape Cod.

If you're like me, you were up to your arse in the British Empire at the library when you weren't reading about America. There are great swaths of England I could find my way around even though I've never been there. It is familiar in your mind. Like Canada and Australia and many other places, Great Britain is in the bones and very marrow of this place. I own the dotted line on the map between Marion- my home, and the next town. That town is named Rochester. An Anglander knows that name. I've lived in Medfield, and Medway. It's called New England, for St. George's sake.

Anyway, he got me to thinking, that theorist, about Cape Cod and my youth.

It's not possible anymore, because Cape Cod is a year-round residence for many now, but there was a period in my youth when the summer season would end and nobody but a few hardy souls, and artists, would remain on Cape Cod.

There was a tradition, mostly exaggerated but with a kernel of truth, of the locals standing, drunk as lords, on the overpasses on the highway on Labor Day, waving black socks at the retreating tourists. They were japing at the predilection of tourists to wear black socks and shoes with their shorts, or egad! sandals and black socks. They depended on the tourists for their livelihood, and resented them at the same time.

There was a period of weather until Christmas, with the warm ocean water tempering the thermometer, which permitted you could walk vast expanses of empty landscape there, alone with your thoughts and the gulls, and feeling as Byronic as any Heathcliff on the moors ever did.

My grandmother lived halfway down the Cape in the 1960s. She was surrounded by cranberry bogs as far as you could see. We used to walk on the tiny aretes between the table-like expanses of russet berry plants and make our way to the beach -- pounded flat and smooth as concrete -- and walk until you tired of walking and your own solitary company.

Time marches on. I don't begrudge the new residents their piece of heaven. I had the use of it, free for the taking, for a good long while first. Just like the British before me.
Posted by SippicanCottage at 10:21 AM

Sipp's corner of New England has the place names of Kent, Old England - and Chatham (Kent) has recently been big news in the UK as the presumed origin of the Romany/ Gypsy word 'chav' - which was new word of the year 2004, used all over the mass media.

Chavs are defined as a sort of white-underclass - see
http://en.wikipedia.org/wiki/Chavs

But I had only come across Chatham in the references to the Royal Navy dockyard in Samuel Pepys diary - Pepys (as an administrator) did a great job of reforming their corrupt practices.

I like Churchill's assessment of the Royal Navy traditions he was trying to reform:

"What traditions are those, admiral? Rum, sodomy, and the lash?"

Editor theorist- Speaking of lunatics from the Royal Navy, a friend of mine, for reasons impenetrable, has a collection of Jackie Fisher memorabilia.