Slow And Steady Wins The Race 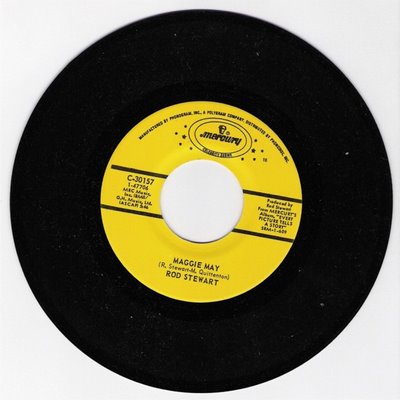 Rod Stewart - Maggie May
[Editor's Note: Hit the "Play" button and you can listen to this song while you read.]
{Author's note: There is no editor}

Well, she's stumbled badly. I'm vaulting over her prostrate form, after trailing her badly for a week. Ann Althouse has posted a picture in her series: Unplayable 45s I Won't Throw Out, of Wham! singing Wake Me Up Before You Go-Go. She's suffered an irreversible setback on two fronts:
1. She owns this record. Now, I own lots of bad records. People would give me records all the time, thinking that's just the sort of thing I'd like. These were generally the sort of people that used to give me handkerchiefs or Hai Karate aftershave for Christmas presents. "I noticed you like John Lee Hooker records, so I bought you this Olivia Newton John Greatest Hits. Same sort of thing, isn't it?" I always found such gifts touching, but I never got the urge to listen to Physical while wearing after-shave and blowing my nose. Which brings us to:
2. Number two, indeed, because that Wham! record might be the most obnoxious thing ever pressed into plastic; but poor, deluded Ann is telling everyone it's "one of the best pop singles ever."
The mind reels.

First of all, we know that the greatest piece of pop ever is either Ringo singing It Don't Come Easy, or Badfinger singing No Matter What. This has been determined scientifically by me listening to the radio for a while and then writing my opinion down on the internet. Literally tens of people have agreed with me. Case closed.

That Wham! (don't forget the exclamation point!!!!!!!)record came out in the eighties. There is no delicate way to say this to a woman, but here goes: you're older than me, Ann, and that means you were an adult when you purchased that thing. How do you bear the shame of it? Seek solace in the Bible or the bottle.

Now, me, I'm going to put up the second best Rod Stewart record ever, Maggie May. The best is of course You Wear It Well, but I can't find that one. This will do, it's still 25,000 % better than George Michael. Faint praise, indeed.

Now, Rod Stewart was busy being 99% as bad as George Michael in the eighties, and other than avoiding lingering in public bathrooms recently, it's a tie as to who's worse now. But Rod Stewart, or Raw Sewage, as I used to call him, made a few fabulous records thirty odd years ago, and he can always trot them out onstage while women throw their grannie panties at him. George Michael just gets to pose for mugshots.

And me? well, I'd rather hold up a mugshot number than a Wake Me Up Before You Go-Go single.
Posted by SippicanCottage at 9:45 AM

I still go crazy when they play "Maggie May" on the car radio. Thanks for the mp3!

There was a song of Rod Stewart's that I liked that came and went and never really caught on: "Broken Arrow." Maybe because of the weird, overproduced video.

Well, your records appear to be playable, and it looks to me like at least 3 out of 4 are reissues so far, so you're going to have to do more than outpace Ann's quantity to make a showing in this competition you perceive.

If you want to make a case that "Da Ya Think I'm Sexy" is a better song than "Wake Me Up Before You Go-Go", I'll listen to it. (The argument, not the song!) The instrumental b-side of the latter is actually a lot of fun.

I, too, was an adult when I bought it (you want I should post the picture sleeve?), but mine's still in good shape cuz I put songs for the kids on cassettes for them. (Some Disney and Raffi, but also the Royal Guardsmen's "Snoopy" songs, Harry Nilsson's The Point, and eventually Beach Boys and Beatles and other things they showed interest in.)

"It's just supposed to be fun, and ephemeral, and that's it," or to quote professional music journalist Stephen Thomas Erlewine, "'Wake Me Up Before You Go-Go' is absolute silliness whose very stupidity is its strength." I wouldn't walk across the street to piss on George Michael (or Michael Jackson or Madonna) if he was on fire, but I don't let his hobbies or the remainder of his crap music impair my enjoyment of this one song.

"One of the best pop singles ever" may be hyperbole, but I'd have a hard time naming a better one from 1984.

hazy dave-heh. Most of my 45s were purchased from a business that filled juke boxes. I was seven years old in 1966.

Ann's drubbing me, of course, except the Wham! single. That's a dreadful record. Not dreadful enough to be camp, either, like so many dreadful records I sorta like. In a way, "Do you think I'm sexy" works as a goof in that way. Both of them drive me right up the wall.

The mid eighties had plenty of good pop. How about Dan Hartman singing "I can dream about you." That's 1984. How about xtc? Hell, Howard Jones.

She really put the hammer down with the Them record. I can't compete with that.

I like XTC well enough (even saw them live in suburban Chicago on a rare US tour), but Dan Hartman ain't my cup of meat. Ditto Howard Jones, though I can't off the top of my head even name his Hit Single. It's probably on that "Totally Eighties" double disc I got at Half Price Books some years ago.

These folks seem to be sort of on your page with Hartman:
http://www.lossless.net/sounds/
(Located with random serendipity.)

So, what do you think of "Video Killed The Radio Star"?

Amba. I know of a song titled "Broken Arrow" from Neil Young's Buffalo Springfield days. But I didn't know if Stewart remade it or if it's another song. I'll have to research it. (After all, how many songs called "Broken Arrow" can there be!)

Frankly, when I read this: we know that the greatest piece of pop ever is either Ringo singing "It Don't Come Easy", or Badfinger singing "No Matter What", it made perfect sense. No Matter What is an outstanding Beatle-esque piece, and is still one of my favorites. It brings back memories from the recesses of my reptilian soul.

Well, I was wrong. There are two songs titled "Broken Arrow". Stewart sang Robbie Robertson's version. Neil Young also wrote a song called "Broken Arrow" in his Buffalo Springfield days, but it was a different tune.