Ramshackle Is My Middle Name 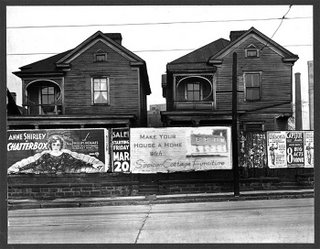 I've been in the construction business, in one form or fashion, for most of my life. Tectonic plates have shifted; continents meandered across the mercator projections; empires have risen and fallen. Pluto's not a planet again. I keep going.

When I was a schoolchild, they told us Pluto might not be a planet, by the way. What's happened in the interim that gave everyone the impression it absolutely was a planet, and now absolutely isn't? Is it the same thing that makes people argue about it on the internet as if they owned real estate on Pluto and stood to lose money, all the while spelling argument "arguement" and sprinkling apostrophes all over the place except where they belong? I expect so.

People have all sorts of information available to them now, and not much of it is very good. And some of it is good, but not useful. To paraphrase Mark Twain: stay away from the internet and television, and you're uninformed; go there, and you're misinformed.

I'm an odd person. I've been lots of places and seen lots of things that most people that can read, write, and spell never do. The real world callouses make me inscrutable to a cubicle dweller; the "Three R's" make me suspicious to the day laborer. When I left my last job, the CEO and the COO begged me to reconsider. They had promoted me from the lowest rung to senior to one of the owners. What did I want? Why would I leave? They called me, a day before my notice was up, the notice they had strung out over three months, and told me: Eureka! we got the bright idea of digging up your old resume and now we finally understand you.

Ever live in a house like the ones pictured above? I have. I used to work on them all the time, too. By gad how I loved them.

When I was wandering through a portion of the education required to become an architect, a friend of mine took me to see one of his other friends who was renovating a bombed out looking victorian in Roxbury, Mass. I was born right down the street, but hadn't been there much recently. It was very dangerous to be there after dark.

The fellow had bought the place for next to nothing, lived in it like the wooden cave it had become, and was repairing it by himself.

He had taught himself carpentry, and electricity, and plumbing, and plastering and painting, and all the other aspects of home construction usually foreign to architects. You heard me right, architects generally have nothing but the most vague ideas of how things get done in construction. Surgeons don't empty bedpans. I didn't want to be an architect anymore. I wanted to be that guy whose name I don't remember. And this was five or ten years, easy, before Norm Abram and Bob Vila stood on a scaffold right down the street from the place I was describing, and did the same thing with a camera pointed at them.

I've done everything you can do to a house, old or new, from digging the hole to putting a vane on the cupola. I've bathed in lead paint. I've discovered beehives the size of mattresses inside the walls. I've found whisky bottles left by the workmen who built the places in the 1800s in the walls. I've seen wooden plumbing pipes and dirt floors and secret closets where people hid during King Philip's War. I've worked 16 hours straight, laid down on the wood floor when it got dark, and got up and started again. And now I make furniture.

I've got to get my hands on it. I can't help myself. And I'm just like Pluto. I dip into the solar system, occasionally, in my erratic orbit, and the other planets wonder: Is he like us, or isn't he?

It gets cold out here from time to time, but you get a wonderful view of the universe.
Posted by SippicanCottage at 9:47 AM

Yup, you're an odd duck, all right. Of course, some of us are sort of partial to odd ducks.

My son (he of the Paris pictures) is studying architecture and came home with this architect joke:

What's the difference between God and an architect?

Please note that he came home from his summer job working on construction with this joke.

We were discussing counters last night and why I'm not overly fond of the current granite fad, when he got pensive all of a sudden and said, "You know, they've never given us a materials class." Here he is in fourth year, and they've never given them a thorough foundation in materials. Sheesh! And this is at one of Canada's best schools.

Seems to me tinkerer v. non-tinkerer is as useful a metric with which to classify people as any (and a more useful way than say, sexual orientation or ethnic background).

I also think that orientation doesn't change over time, just the degree with which people run towards or away from their nature.

Being a tinkerer isn't favored now, so many find ways to mask their nature, or 'hobbify' (ohh! those misplaced apostrophes) their inclinations.

Primary, secondary and post-secondary education are all actively hostile towards tinkerers and trade schools are virtually non-existent for teens and pre-teens, which is a shame.

I'm a tinkerer, too. Never was smart enough to turn it into a moneymaking scheme, though.

(and my preferred materials have been electronic devices rather than wood or pipes, mistakes can get very expensive)

The difference between a doctor and an architect is: a bad doctor can bury his mistakes,while a bad architect can only advise his clients to plant vines.

xwl- You're a very erudite fellow to use the word "tinkerer" instead of tinker, because I'm sorta Irish and we'd have to have a fistfight if you called me that.

Your experience tinkering is more the norm these days. The modern version of the "shade tree mechanic" is guys that do case mods to their computers. The soldering iron, not the wrench or tablesaw, is the new tinkerer's thing.

I used to do much more of that sort of thing than I do now. I once made a device to fire all the cameras used by the Boston newspapers simultaneously at the finish line of the Boston Marathon, when my roommate worked for the Boston Herald. That was back when there was still film in the cameras.

As an abstract-minded cubible dweller, I'm very compelled by and envious of your penchant for tinkering. My stepfather tried in vain to get me (a teen) to work on engines or home repairs. I always preferred a book, never having the interest in the tangible. Decades later, I realize the folly of my ways.

Tinkering -- Yes, that's it. "Let's try this and see if it works." I've learned I like tinkering and tinkerers.

cakriez -- I was the same way growing up. But there's nothing like owning your own place (and things) to make you start trying. And it's never too late.

I just replaced our dishwasher. The store wanted $120 to install the new one. I almost laughed out loud.

Walrus, that joke's an old one, and the version I heard was about federal judges, not architects... of course, that may be because I heard the joke at law school, not a construction site.

By the way, what's the difference between a catfish and a lawyer? One's a bottom-dwelling scum-sucker, and the other's a fish.

I was always good at taking things apart as a kid. Putting them together, on the other hand, was not my strong suit, although I did "tinker" some. I once built a doorbell for my bedroom when I was in high school.

P.S. Greg, you're getting very, very good with Photoshop.I know from personal experience how much painstaking detail work it takes to merge a new creation into an old photo.

Well, you're a very good writer too Mr Cottage - how d'ja learn that?

One of my college classmates has the surname "Schwingshakle"...So if he were your brother, you'd be "Sippican Ramshackle Swingshackle," which I find chortle-worthy.

And I do believe your quote is from Frank Lloyd Wright.

Well, I was out all day. Goodness, what a trove of interesting comments.

McGill was a superb guess though, wasn't it? No-one's more elegantly and incisively wrong than me. It's a gift, really.

Ruth Anne- If you uttered that paragraph aloud in the United Nations, and the translators got a hold of it, World War would break out over the translations. And would Ramshackle Schwingshackle be hyphenated? You know, like Rimsky-Korsakov. His music is better than it sounds, you know.

These are the things that keep me up at night.

editor theorist- That was a very kind comment, and I'm grateful for it. I must admit, I am an auto-didact at this as I am in most everything, and by the most scattershot method too. It leaves enormous holes in your education to learn that way. You can pick up things others miss, though--trash by the side of the road in an orange jumpsuit, if you're not careful.

Something about psychological neotony appeals to my innate child-like flexibility of attitude.

Patrick's got a nice tie. Thanks about the Photoshop. My son asked me how to do it so I made that one with him. He's eleven and interested in everything these days. I'm a lot better at it than Adnan Hajj, which is hardly boasting, is it?

Jeff and cakreiz- I'm like you both, in that my background is not "handy." I think my father might be the least handy person I can name. He can tell you a story in the Irish manner, though.

The cubicle is where you often tinker with ideas. I've done that before too, for a stretch, and it has its gratifications, don't it? The world needs more idea tinkering than physical these days. It's all good.

Thank you, everybody, for reading and commenting.