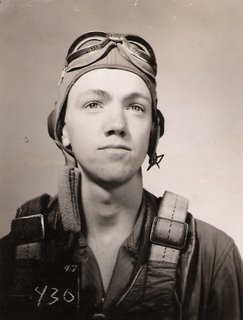 My father asks me for nothing, really. Every three months or so, I take him to his doctor, who pokes about him wondering what keeps him animated, and that's about it. He's grown frail, and has discovered the joys of "Not Going." It takes a lot to get him to leave the comfort and safety of his house. I was really surprised when he called me on Saturday, because he asked me to take him somewhere.


My father asks for nothing. 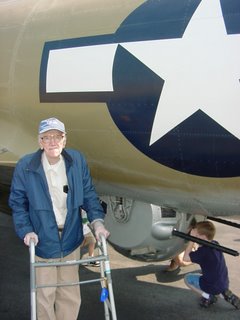 Posted by SippicanCottage at 8:22 AM

He may ask for nothing, but we owe him and his comrades in arms everything.

I spent Saturday at the National World War II Museum (the D-Day Museum) in New Orleans. I wasn't sure whether I was going to post on the emotionally draining (yet uplifting) experience, but after I saw your deeply moving story, I had to: Service, Honor, Valor, and Thanks.

I hope your dad knows, somewhere in his big heart, how grateful we are for what he did for us.

Lump in the throat stuff - thanks.

Jeez, give us some warning, willya? I am not supposed to have tears in my eyes at this time of the morning.

Seriously, thank you for sharing this. And most of all, thank your dad for all of us. We owe him -- and especially the ones who didn't come back -- an eternal debt of gratitude.

I am honored to serve in a congregation with a significant number of veterans and active duty servicemen. Memorial Day and 4th of July are very special here.

Patrick -- Same kinds of emotions I have had the last couple of weeks, during which I lost my next door neighbor and friend, Capt. Fred Carment USN - retired ...Fred flew many airfraft from a number of carriers, from props to jets, and his stories were grist over many holiday dinners, and occasional beverages of rather suitably high octane. DaleA

And many thanks for your Dad, of a generation that esteemed being "a good man", and endeavored to live as one.

Be sure to read Patrick Martin's item. He's a better photographer than me too.

I have to admit, I'm crying too. My own father was too young to serve in WWII, although he was a fighter pilot, but my uncle was a navigator with the RCAF and did bombing runs over Germany. To this day he never talks about it. He just amiably deflects questions.

Some day, Greg, you have GOT to write a book!

Great stuff, despite the pernicious influence of the late 60s and the entire 70s, a heavy dose of Reagan, and the huge shock of 9/11 has minted a whole new generation of folks like your father.

(but, shhhhhh, don't tell the media, they don't want to hear that)

Let's hope the current fight is fought vigorously, and is won soon.

Thanks for sharing that.

Thank you for posting this, and for taking your dad to the air show.

Please pass on our thanks to your dad for his service.

And tell him what an inspiration he and all his comrades in arms still are to all of us.

From me, please pass on the best salute you can muster. It is for his part in creating the great tradations of the Air Force I had the honor of following him into.

Please get him to participate in the Veterans History project if he will. http://www.loc.gov/vets/

We know so little of the personal stories of our heros. My father rode a ball too. All I knew about it was he still had his coat and gloves. And refused to fly.

Not until my Mom died and I was in my 50s did I find out why. He was in two crashes in Italy. Figured the third time would be the charm.

At an airshow I ran into someone who had just finished assembling a B-24 from crates of parts he had acquired in India! He had parts for 2 more! He found that India had these parts and wanted F-104 Starfighter spares for them. He somehow got them out of Canada's mothballed F-104's, thus a trade was made...

Thanks to all for your kind wishes for my father, and all the men like him, of which there are many.

Please read Patrick Martin's entry linked at the top of the page.

Ron- I'm told they made more b-24s thatn any other plane of its type, and there must be a lot of them rusting around the world. I was sort of amazed to learn this one we saw was the only one flying around.

Mark- I hadn't seen the website you mentioned, it's very interesting. My uncle died in Korea, and we've participated in a memorial of sorts for that, but it's hard to contemplate that a WW2 veteran is going to get to be a rare thing pretty soon, isn't it? There were so many.
My father has many stories to tell about his time in the pacific, but really has never done it. I read a list of his missions. Yikes.

The planes come here to Moffett field and park in sight of Hanger-1 for the past several years, and I go to see them and sometimes I get to meet guys like your father. Thanks. I love to hear the sound of their big round motors going overhead, right over my home - the racket they make is a symphony.

Dirtcrashr- Yes that's the plane we saw- The Witchcraft. Fantastic picture. You can see the bomb bay doors, with the retracted ball faintly visible just behind them.

Thanks for posting that.

You folks are all marvelous.

Look how young he is. You watch the movies and you forget how young these guys were. Civilization was saved by children.

Fantastic stuff. God bless the man and how wonderful to have him here still. I wish my Uncle Billy had lived through his air war in the ETO. Bad weather and a malfunctioning bomb rack conspired to end his young life in 1944 and I've always wondered what he would have thought of the current state of the world he helped save. How does your dad feel about it?

m.takhullus- You're right. I have pictures of him in the South Pacific a few years later and he looks like a man then. And I think my father had been in the army for a while before that picture was taken. He was a gunnery sargent, and transferred to army air force after a while. He might be 19 years old or so in that picture, maybe twenty. They all just shrugged their shoulders and did what had to be done.

Mikey- Thanks. it was a very dangerous business just to fly in those planes, never mind the shooting. I looked around in that plane and realized there wasn't one thing in it I didn't understand, just by looking at it. It was like a flying bulldozer. Really primitive. Those men were all brave to fly in the damn things.

My father is so immensely... Boston... He does not offer opinions on large matters much. He'd rather tell you about James Michael Curley than any contemporary politician. But no Boston Irishman of his vintage could ever see himself as anything but a Democrat.

Be grateful and honored that you got to share that moment with your father. The memory of that day will sustain you when he is no longer with you. Thank you for sharing the emotion of that experience with us, it helps us to remember to honor our loved ones.