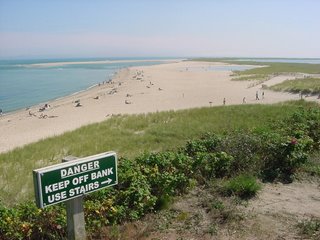 Ah, we've returned in pixels to the lovely Chatham, Massachusetts. Chatham's way out there on the cape, near the elbow where you turn north and head for Provincetown, and then... well, Portugal, if you've got a boat.

Pilgrims have been mucking around in Chatham since 1656, when they first came here to farm. Eventually even a pilgrim can figure out the ocean was full of fish, and didn't require weeding, and the local economy quickly turned to fishing from farming. My own uncle used to fish based out of the harbor down the road... um shore -- Harwich. There's more tourists than fishermen now, of course, but you can still get in a fight at the local taverns in the dead of winter if you so desire. It's the traditional way for the Cincinnatus of the ocean to pass the time in any dead period in their schedule. It has its amusements, these fights; for the fisherman and the onlooker, anyway.

Chatham's a rich place. And it still looks like a beachside resort, not Disneyland. It's fun to walk around and look at, if you like shore architecture. I do.

The first picture is a scenic overlook and stairs to the beach, located across the street from the Coast Guard station and lighthouse. It's a busy little strip of parking and gawking and shoe-sand shaking. The sand bar you see in the distance used to go right across the horizon to the left, but was breached in a hurricane a few years back and stayed that way. The beach rarely stays put in this world, no matter how much you paid for beachfront property. There were dire predictions about this breach in the sandbar, but like most dire predictions, it hasn't amounted to much.

People from the midwest don't understand how rare it is for people around here to see the horizon. It's hard to get far enough away from anything around here to see it. It's the reason, besides the water, that the ocean captures the imagination of the average person.

People build bad houses that gape at the water through big sheets of glass now, because they have money and no sense. It's not the way to go. You quickly get a surfeit of any view you hog like that, and it becomes a sort of wallpaper. The first time you go to someone's house that has a second floor deck served by banks of sliding doors on the ocean, you're captivated, and massage their ego for owning the whole thing. You big scene gaping swell, you say. Stay with them for a week, and you'll notice it's the glowing blue thing in the cabinet, not the luminous blue thing under the sky, that they're looking at. You've got to frame that view if you're going to look at it every day.

It's nice to be at the shore, with the great corona of the sun beaming upon your mien, and the gentle zephyr wafting the fragrant sea air all around, and tiny devils of sand like talcum swirl underfoot. You're outside. On a boat, with land in view, it's even more wonderful and striking. But when the shoreline disappears on a boat, the ocean becomes blue textured shag carpeting, as seen from a mezzanine in a lobby -- unless you're in a small boat, when it becomes kinda scary.

So that's a lovely place I showed you to go and see and sit and swim. But this is how to meter that loveliness into your quotidian life, like divdends on some wise investment. Frame it and show it, and snatch it back from sight and reveal it again. 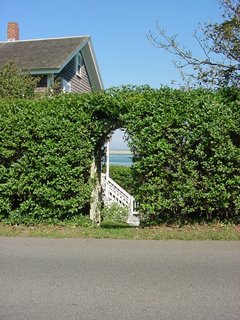 I walked back and forth right there until the owners of the house called the police.
Posted by SippicanCottage at 8:34 AM

How very true! Familiarity breeds contempt, but somehow a frame changes all that. When I leave my back door open and glance through it to see the morning light illuminating the flowers, it stabs my heart with its loveliness. The frame creates a kind of inaccessibility, which then creates yearning. Which is one of the loveliest ways to suffer...

And to the lover of orthography, may I point out that the correct spelling is "quotidian?"

How much you paying?

Money is just an intellectual construct that holds the masses in its terrifying thrall. I wouldn't want to make you into a running dog lackey of the bourgeosie capitalist pig dog hegemonist overlords, so I will not sully you with offers of mere lucre.

You'll simply have the good wishes of a grateful nation, and the creeping realization that I fixed the spelling and now your comment looks crazy.

Umm, Greg, that's bourgeoisie... with an i after the o.

Well, of course I misspelled it purposely as an insult to the French,who got on my bad side with those cheeses that smell like sweatsocks, and that sauce. You know the one. Bernaze. Yeah, that's it.

Yes - far views. The tourist board here describes Northumberland (northernmost English county, bordering Sotland) as 'land of the far horizon' - and that is a great appeal of hillwalking in the Cheviots. The coasts have a similar flat expansive quality to that picture of Cape Cod.

But another horizon is the sky - a blue sky with maybe a few high cirrus clouds, or a clear night sky with visible moon and stars.

Living in a city, the sky is perhaps the most important horizon - and its a reason why I find a cloudy climate and weather (eg. Glasgow, Scotland - where I resided 3 years) to be chronically depressing.

Don't get saucy with me, Bernaze!