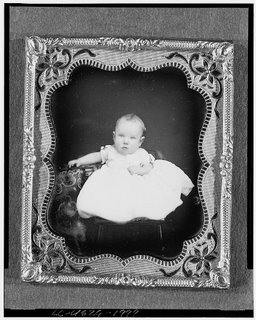 Hi all. I'm having a Monday squared, how about you? There seems to be some sort of dark matter on-line somewhere that eats my text whenever I'm trying to enter it into a text editor. Bad comedians used to make jokes about "where the socks disappear to" in the comedy clubs. I imagine it's been updated now, and with your two drink minimum you get to hear about "where the pixels go" now.

Anyway, we get peevish when the little wonders we are increasingly relying upon let us down. It's human nature. But I've missed a few meals in my youth, and knew people that grew up dirt poor, and I always try to remind myself that we're worrying about the icing on our cake, and luckily rarely have to worry about the pastry itself anymore. You know, like Sinead O'Leary had to:

Her Uncles had found her alone, a little girl sitting quietly in her family home in the county of Mayo. For the Irish, the famine was just the last straw; they had a litany of Cromwell's leftover reasons to leave anyway. And so they left in their thousands. Sinead O'Leary was no different; first to Liverpool, then to Canada, on to Boston. When she finally moved to New York City, now a grown woman and married, she rechristened it New Cork, and no-one she knew dared disagree. She made it so.

She simply refused to remember anything unpleasant, and seemed to forget nothing else. She regaled her children and grandchildren with stories of Cuchulain, and Medb, and faeries and wee people, a living encyclopedia of fun and fantasy.

She saved what little money came her way, and she bought and sold things. Her long lost relatives would send her this and that from the Auld Sod, and she'd sell them to Yankees who collected such as her family had, as if the Irish were as exotic as Babylonians, not right across the Irish Sea from their own forefathers.

One fine spring morning, she opened a bible box her uncle had sent her. Inside, sheepskin glowed with monastic filigree. She knew the Lord's word was on those Latin pages. Oh yes, she knew. She was wise enough to know also: There was a devil of a ransom in it from a collector too. And when a trim woman appeared at her door, sent by her employer, the Colossus of Finance, to buy it for that mausoleum of manuscripts he was constantly stoking on Fifth Avenue, Sinead was ready. He wanted it like the damned wanted icewater. Sinead knew how long to hold out before acquiescing.

Into real estate the money went. Then her son invested it for her in the stock market. Soon the simple woman, who still retied her own lace when it frayed, was rich. She always was, if you asked her, even though her Uncles could have told you they had found her alone in that stone cottage, all those years ago, because her parents were dead and gone, outside the door, their mouths green from trying to eat grass when the potatoes failed.

She was very old when that awful day christened "Black Friday" took her fortune, just like the famine had taken her family those many years ago. Her son sat with her on the simple wooden settee she still favored. "It has St Patrick�s clover in it, and to put a cushion on it would be extravagance itself!"

He gently told her that he had lost her money, over a million dollars, in one afternoon.

Her son, now grown grey himself, and ruined along with his mother, couldn�t comprehend.

Her son burst out laughing. And he knew then, that his beloved mother was placed on this earth for a reason. And they would rise again. Surely.

Alway remember whence you came, people.
Posted by SippicanCottage at 11:02 AM

Off topic - do you have any photos anyplace of your Sippican Cottage workshop?

I'm wondering whether you have apprentices, or maybe big machines like the New Yankee Workshop which I have seen on cable TV.

BTW I don't know anything about working with my hands, but my father worked as a joiner's apprentice during vacations from training and working as a woodwork and art schoolteacher - then later become another kind of craftsman - ie. a dental professor specializing in crown and bridgework and inventor of the Charlton Crown Post - a stainless steel peg to put-into a broken tooth to rebuild a new copy.

I followed him into academia, but not into joinery.

Editor theorist-
There's a few pictures in my archives for sippican cottage furniture in the what's new department.

If you look through the catalog pictures, you'll see pictures of the sippican cottage, if not the workshop.

I wrote about the design process sprinkled over a week or two starting here: disregard the man behind the curtain I've never completed the prototype of this item because I'm too busy filling orders for existing items.

I wonder, would others like to see what's going on in the shop? I work alone, for the most part. It's dull and interesting at the same time, like most things.