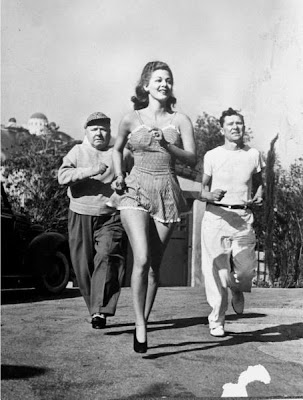 When I was young, there was a coterie of entertainers, some still alive, many recently dead, that seemed a bit mildewed and square, but had a certain something that kept them from disappearing from view altogether. They'd have little renaissances, either as shadows of themselves, still performing, or as icons; then they'd slip below the entertainment horizon again.

All the three main Marx brothers had a run. Henny Youngman. Rodney Dangerfield. Charlie Chaplin ebbed and flowed. Harold Lloyd. Even Mae West caught a flurry of interest in the seventies. George Burns clawed his way out of the crypt every once in a while for forty years or so, dragging his friends Jack Benny and Milton Berle along. Jackie Gleason got his homage regularly. Come and go.

But man, I never got tired of William Claude Dukenfield, the genteel bum:

There were a couple of juggling videos making the rounds of the internet recently, and they struck me as mildly entertaining. They immediately reminded me, though, of the most entertaining juggler that ever lived: W.C. Fields. Someone finally took pity on me and posted that video on YouTube, so I could prove it to you. And he's barely trying in that one.

Remember when celebrities could do things, and entertain people?
Posted by SippicanCottage at 10:32 AM

Sip:
That was fantastic- gave me some real belly laughs. I never knew old WC was such a great juggler.

What did he say? "A man who hates dogs and children can't be all bad."

I never knew he was thusly talented. Thanks.

I wonder if YouTube has any Harry Houdini. Would love to see that, too.

Damn that's good. You said it, I do remember when celebrities used to do things, and it's a shame they don't. Or that nobody minds.

Thanks for sharing. What a treat.

It is interesting that we don't really call people "entertainers" anymore -- they're celebrities, or singers, or some such.

It's been a while since anybody came up through vaudeville. Pity.