Get Out Of My Way 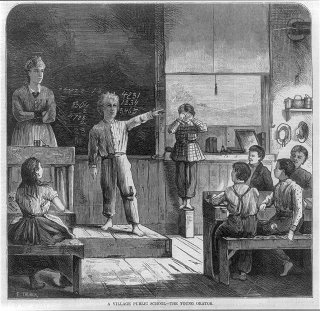 Human beings, who are almost unique in having the ability to learn from the experience of others, are also remarkable for their apparent disinclination to do so. Douglas Adams

I found out something fascinating yesterday. You can be educated, by the Massachusetts Institute of Technology, for free.

No, I don't mean the rheotorical you; I mean you. And me. Anybody.

Well not anybody, of course, because not everybody is educable. But there are no entrance requirements, no interview, nothing; they just put the curriculum up on the internet and let you use it. As Lawrence of Arabia says to Ali, pointing across the trackless waste of the Nefu desert towards Aqaba: "It's just a matter of going." Simple, really.

Indeed. Now, you're not going to get to ask anybody any questions, get help from your peers, go to any keg parties, or clap any erasers for brownie points or anything. The stuff is just laying around there. You've got to do something with it, no one's going to show you the way.

Experience is a dear teacher, but fools will learn at no other. Ben Franklin

Now, if you know the vernacular of the 1700s, you'd know that "dear" means "expensive" or "difficult" in that aphorism. And Ben knew what he was talking about, because he was talking about himself, really. He's one of a long list of people that taught themselves what they wanted or needed to know. Like most auto-didacts, he knew amazing and voluminous things, but there were large gaps in his learning. This is the danger in not having a curriculum set out for you.

I've never been able to learn things properly. I always just wanted to be left alone in the library with the information that interested me. But you'll notice that Ben Franklin didn't espouse his method of learning, and neither will I. It's a self-selecting cadre I inhabit, and if you join because you think it's sexy, you'll likely make a mess of your life. Try going into IBM and telling them you know the things an MIT education encompasses, but you have no credentials to prove it. The tests you didn't take online aren't in the Human Resources person's desk, either. Grab a broom.

The only real way to learn anything in this world is to do it alongside someone that knows what they are talking about. But the person that knows what he's talking about is a rare thing, and rarer still is that person that will help you. They're busy. But sometimes they write it down. And you can learn it from them, even if they're halfway across the planet, or dead as a Pharoah.

People drop out of college now, and say: "Bill Gates dropped out of college, and he's rich. No problem." Believe me, you're not Bill Gates. If you were, you wouldn't be looking around to see what other people were doing, and mimicking their approach. Being an auto-didact is a force-play. You run to second base on a ground ball or you're out. There's no deciding in it. You are or you ain't. Bill Gates and his ilk stole second and third and home, and you're still trying to bunt.

A sympathetic Scot summed it all up very neatly in the remark, "You should make a point of trying every experience once, excepting incest and folk dancing." Sir Arnold Bax

Regular people make the world go round. By definition, most people are regular people. But if it's enough for you to have the stuff in your head, because you can use it, and know how to pan through the whole placer to find the glittering dust that's there in the ore, it's there now.

It's just a matter of going.
Posted by SippicanCottage at 9:04 AM

Perhaps we should learn to nurture our inner obsessional weirdo, our T.E. Lawerence in us?

Most people running the bases in that force play tend to blame the blown hit-and-run call that led to the feeble swinging bunt which has got them chuffing down to first and oblivion...

Wow! This is incredible.

But, it turns out that much of life is "just a matter of going." That's what I find so damning in my life...I've chosen to go so infrequently. And that's a waste of a life.

Thank you for the MIT link and for the good thoughts.

In law school, after our class asked one too many times if "this is going to be on the test", my professor remarked:

"Students are the only consumers in the world who want less for their money."

The economics bloggers, such as Greg Mankiw of Harvard, were full of a related story a couple of days ago - that Yale is going to do the same as MIT has been doing for several years and make their teaching material freely available - even as podcast videos, I believe.

Meanwhile, I teach at a decent UK university (Newcastle) but one several dozen notches below Yale and MIT - and Newcastle spends zillions of pounds in _preventing_ the public from getting access to its teaching material (it's locked away behind a password-protected, user-unfriendly interface called Blackboard).