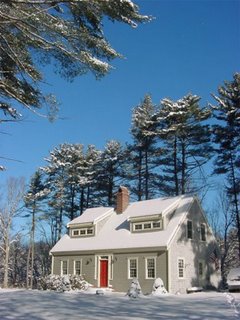 Southcoast Massachusetts enjoys the most benevolent climate in New England. We don't get that much snow, and winter arrives later for us than inland because the ocean stays warmer than the land, and Autumn lasts a good long time. I went sailing in Sippican Harbor in December last year, and it seemed balmy.

Conversely, the ocean remains cooler than the land in the spring. One hour west of here, the sun can make it seem downright hot in March and April, while hereabouts it's overcast and leaden, cool and gray. It never really gets hot until July, usually.

Late in the Winter season is when we get the snow, if we're gonna get it. And last week, we got eight inches while folks North and West of here got next to nothing.

It's not enough snow to bother you much, and sweeping the stairs is all that's really necessary, and the shovel will slumber uninterrupted throughout the whole season. It's like a lovely glaze on everything, and it amplifies and redistributes the light so it makes the most pleasant aspects from even mundane views, and the contrast with the cobalt sky makes even the eastern desert sky at nightfall jealous.

You can see the trees' shadows reaching out to caress the side of the house, and the phalanx of pines stand guard to the North to redirect the wind up and over roof, and allow such as we to dwell in peace, and keep the drifts away from the back of the house when the Nor'easters howl.

The house tries not to be at war with its surroundings. It is made to look smaller than it is. It has quiet, if not somber colorations. The red door isn't any gaudier than the barberries at the corner of the house, after all; they'll draw flocks of fat robins to flutter outside the window and poach their berries, and remind us inhabitants that Spring is on the horizon.

It's delicious to step out into the warm sun, with no coat necessary -- finally -- and form a snowball with your bare hands and fling it at any target to amuse the two year old.

Sometimes Nature has no teeth when it smiles. We smile back.

Posted by SippicanCottage at 9:30 PM