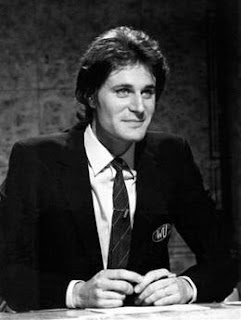 Charlie Rocket’s dead. He killed himself. They didn’t say why. But I figure it’s because he entered the world of movies, television, and music, and it killed him. It’s a nasty business, stem to stern, and eats people like Charlie up, every time.

I haven’t seen Charles Claverie, or Charlie Rocket as he called himself, in almost thirty years. That is to say his person. I encountered his persona, here and there, off and on, right up until yesterday when I saw his face in the paper one last time. He’d appear in the oddest places, unbidden, some rented movie you watched with one eye open while dozing on the couch, and you’d think, “Wasn’t that Charlie Claverie?” Dumb and Dumber. Dances with Wolves. Remington Steele, for gosh sakes. You’d watch the credits roll by, and there he’d be. Way down the list usually, after the bimbos but before the stuntmen.

He was a sort-of friend of my older brother, and I met him in a decrepit but appropriately bohemian apartment in Providence at the turn of the seventies, if memory serves. He was one of those people that make an impression on you and stick in your mind forever, and gather dust on the back shelves of your mind, but you never throw them out. Charlie stole a parking meter, and used it to replace one of his bedposts. That would be enough of a visual non-sequitur for most people, but not Charlie. He’d put coins in it before going to bed, too. How could you forget Charlie?

Charlie was an art student. So was my brother. Like many of his friends, they ditched everything but music right quick. Charlie went for theater of the absurd, too, right away. He played in rock bands where he was one of two accordionists, and that was when he was being serious.

My parents had divorced when I was a young teenager, and I was adrift for a long spell. My older brother was a sort of planet around which I’d orbit occasionally, grateful for the gravitational pull of his intellect and humor. His friends - people like Charlie - were like moons. Brilliant, distant, beautiful.

There was a whole galaxy of interesting people there, and I remember many of them. A handful of his classmates formed the Talking Heads; another, Rudy Cheeks, became a kind of official zany for the city of Providence; and they all infested Rhode Island like pleasant cultural termites, eating away the inside while the veneer stayed put and the paint peeled.

His friend Dan Gosch and Charlie were bartenders at the Providence version of New York’s Elaine’s: Leo’s, the haunt of the literati art crowd for twenty five years. In the mid seventies, when I stumbled into the idea of going to school for architecture, my brother assembled a panoply of his wonderful friends in Leo’s for a dinner in my honor. Many of his friends from the Rhode Island School of Design came to offer me encouragement and advice and buy me drinks, not necessarily in that order. After all these years, a member of that assembly is now my neighbor, living not two miles away. When I spoke to him recently, I forgot to mention that I designed the house that I live in with the little plastic triangles he gave me that very night in a fit of generosity when Ford was president. Or maybe it was Carter, I can’t remember right now; but I do remember the kindness shown to me by my brother’s friends like it was yesterday. Long after my brother had moved away from Rhode Island to ply his musical trade on the left coast, I’d sit in Leo’s and say hi to Dan, still tending bar, and whose marvelous paintings banished the walls. Charlie had long lit out for larger things.

It’s a testament to the ephemeral nature of Charlie and his appeal that his obituary talked about him as a Saturday Night Live cast member, and I had no idea he had even appeared on it. I knew he used to appear uninvited at grand opening celebrations of bad fast food restaurants and such, dressed as a kind of mental patient/superhero, with his friend Dan as a kind of deranged Sancho Panza. He'd bluster his way to the front of the stage, every time. Someone was often filming it, and people still talk about it in Providence. Think of all the people who followed that approach after him, and made careers of it, from toadies on Howard Stern to Conan O’Brien.

He appeared magically on the local TV station, and I imagine his friends were simultaneously amused, beguiled, and appalled by the idea of Charlie reading the evening news. He was a natural of course, but lord knows how he bamboozled himself into the anchor chair without ever even being in the building before. It was probably because he had that sort of life force that made you look at him no matter what he did, and they saw it right away. You could picture him sitting behind the desk with no pants on. It must have been like watching NASCAR if you knew him, the uneventful laps of no interest; you were waiting for the crash.

The crash came on Saturday Night Live, apparently. He was in a skit on live TV, and dropped an F bomb, and got fired. Some of his brethren have tried to intimate that Charlie’s career was ruined by that kerfuffle, and weave the usual undertone of McCarthy-like blacklisting around it. I suspect just the opposite effect was achieved. Charlie made his bona fides with the Hollywood crowd by being the guy that got fired over swearing on live TV, and Charlie leveraged it into a little spot, towards the back perhaps, but ubiquitous, in every Rolodex in entertainment that was looking for that guy. A guy that dressed up as “Captain Packard and Lobo” and crashed Kentucky Fried Chicken openings is not the sort of guy to do something like that by accident, or be unaware of the fallout, good and bad.

There was one problem, I suspect, and it’s the sort of thing I’ve seen more than a few time in the entertainment business. I got a look at show business, nothing much, but enough to know that the worst sort of people run it, and the most avaricious, grabby, nasty people generally shinny their way to the top of the greasy self promotion pole that feeds it.

Charlie was talented. Charlie was charismatic. Charlie was in, and with the IN crowd. The problem, I imagine, was: Charlie was nice. And that business is not nice to nice people. It kills the mean ones and the sensitive ones alike, and the Four Horsemen of the Apocalypse leave a smaller wake than ten minutes of MTV, generally. But it’s the nice guys it grinds up in the worst way, because first it offers them hope, an outlet for their talent; then disillusionment; and then it eats them up entirely. Occasionally it kills them - more often than not it seems sometimes.

I only know Charlie from movies and tv. I've got a knack for never forgetting someone's face. The first time I saw him was in a Movie called "Fraternity Vacation". It was one of the typical '80s sex romp movies. He played a DJ. It's one of my guilty pleasures movies.

Ever since that movie, everytime I saw him in anything else, I'd say..."Hey, that guy was in a really bad movie with Tim Robbins."

I know that sounds bad, but it really isn't. Charlie, for me, is a symbol. He's been in so many movies and shows that I've enjoyed. He had bit parts, never fully enjoying the spotlight, but he had a knack for turning "wallpaper" type roles into scene stealers.

I never really paid attention to his name...but I always recognized him.

Thanks for sharing your memories of him.

Charlie was one of those actors who elevated whatever he was in. He was the only good thing about Its Pat.
It is nice to read that he was so much more than some stupid incident 25 years ago. You are lucky to have known him. Thank you for giving us a little insight into who he was.
It is just heartbreaking that he felt he had no other choice but to do what he did.

I was a waitress at Leo's during that time.

Hi Karen- I hope I left you a decent tip at least once.

I am a few years late, but I just stumbled on your blog (how in the world, you wonder???)

Well, I was a close friend of Charlie's back in the day at RISD... We hung out at Joe's Cafe in those days and he would play "2001:Space Odyssey" on his accordian at midnight, right out in front on the sidewalk. Laugh! I thought I'd die!!!

Yeah he was a madman, in the best sense. Once he told me about a time when friends had left for NYC for the weekend, and asked him to feed their new little teenie kitten for them... He went over there on Sunday night, before they got home, and squatted over the litter box and squeezed out an ENORMOUS HUMAN TURD. Imagine their surprise (horror???) when they returned! OMG!!! Who would DO that? Many would imagine it, and have a good laugh, but WHO would actually do it??? Charlie would!

Thanks for the amazing tribute. I will never forget Charlie... Who could? I feel so sad for his choice, but he always did things in his own original way.

PS Who was your brother?

The cat box story absolutely floored me. Still laughing. Thank you for that.

How cool that you knew him.