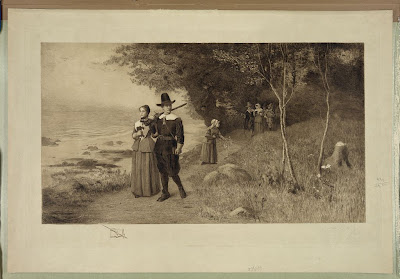 From Wethersfield we went out, about half an hour before sunrising, for Quabaug. We lost our way in the snow, which hindered us some hours. Having neither house nor wigwam at hand, we lay in the woods all night. Through mercy, we arrived in health to the proceedings. JosephBradford, appraiser, had begun calling out the Probate Inventory of our beloved departed Obadiah Dickinson, father of my bride, recently deceased of apoplexy in the yeare of our Lord 1750.

My bride was in distress, and Mr Bradford, spake quickly, and the words tumbled out and gathered and split asunder again without warning, and we were content to let them go past without signifying. Mr Bradford paused, with force, and called my name most clearly, and approached to take my hand. He placed in my hand six coins, of no value, worn and dirty with much handling.

"It was the earnest desire of Mr Dickinson that these be returned to you, sir. "

"I know not of these coins, sir. That cannot be returned which was never given. "
My wife pressed my arm, and looked at me with with such emotion, I did not spake further, hoping until such time as she could explain this mystery.

For my wife's father, who was a good man, and true, did not care for such as myself. He tolerated me only, and watched over his girl as a bear watches his cub. I felt always his look over my shoulder, even betimes he was not present.

We hired a team to bring such belongings as were meet over the frozen Connecticut River to our lodgings, Methinks the villein charged more than the lot was worth to transport them, but he avowed he would not hear the frozen river cracking under each footfall for less than a treasure. My wife could not do without what little was left of her father, and I grudgingly gave way.

"Why should your Pater, who knew no rest in minding me, make me this present? He did not care for me."

"You are harsh, Caleb, and wrong in the bargain."

"I speak the truth woman, Bless his soul, but he did not care for me. He has given me this trifle to shame me afore the appraiser."

"Nay, Caleb, they are your coins, and it is his love which it displays, not scorn."

"You are older now Caleb, and forget the things of your youth. But my father, and I, did not forget."

"You would call on me Caleb, with your hair in place and your clothes brushed. "

"And my father would let us sit alone in the room, while he smoked outside; do you remember?"

"Just so, I had forgotten."

"Father would say he would come back inside when the candle flame could not be seen on the candle shelf anymore."

"Through mercy! I would put the coins under the candle to raise it up and prolong the time. "

"Yes Caleb. He knew. And now it is time you knew- Father did not smoke."
Posted by SippicanCottage at 7:21 AM

A true classic. Thanks for starting my day with such wisdom.