Torn From the Virtual Pages of the Maine Craigslist, April Edition

The Maine Craigslist isn't a collection of items for sale. It's a happening. A cultural phenomenon. It is an encyclopedia of hopes and dreams. It's Maine, so the hopes and dreams don't cover a lot of ground. It's understandable. The ground isn't entirely frozen any more, so it's harder to cover a lot of ground this time of year. It's kinda squishy, and will capture the odd Bean boot if you move too quickly.

Maine's a big place, geographically speaking. It's about the size of Ireland. It's entirely bereft of blarney, however. Mainers are incapable of projecting the false front of bonhomie that blarney requires. They are bereft of whimsy. This Maine Craigslist Cultural Encyclopedia is a great example of the heartfelt sincerity of the place. There is nothing ironic in the Maine Craigslist. Or more accurately, there is nothing deliberately ironic. It's refreshing to live in a place where you are what you is, as they say.

So please -- no mockery. These people are in dead earnest, and deserve, if not respect, at least a hand in front of your mouth while you giggle. 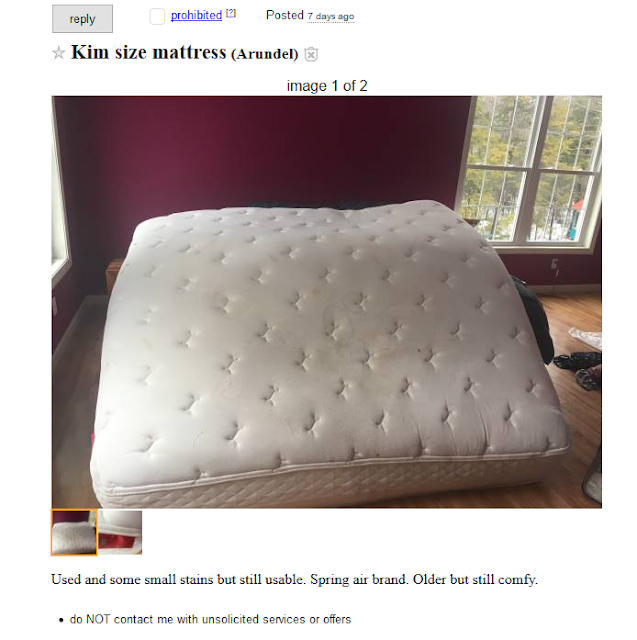 It's a Kim size mattress. Kim's pretty big by the looks of it. Not washing with a rag on a stick big. More like shopping at Marden's on a hoverround big.

Maine people are kind to one another. It's nice to see plain affection stated publicly once in a while. It refreshes the senses. It's nice to know that somewhere in Arundel, Kim's beloved wanted the whole world to know that she's older, but still comfy. Hallmark's got nothing on that guy, I tell you what. 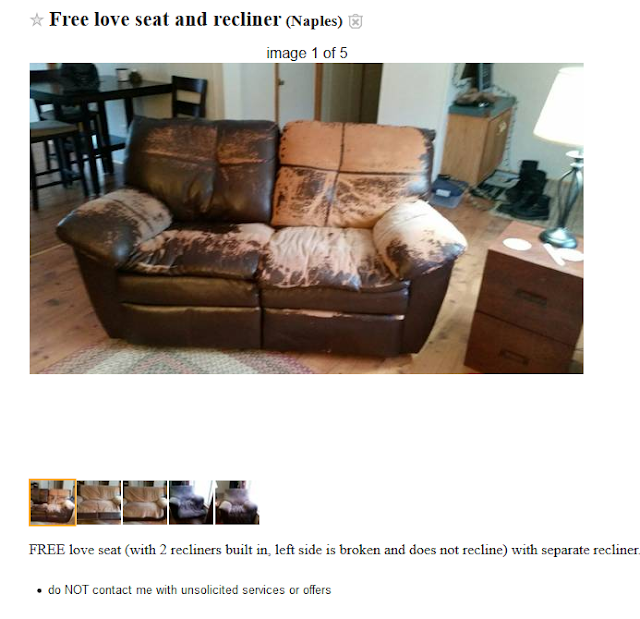 Don't you hate it when your boyfriend has eczema, and you don't, and you wear out the pleather couch unevenly? 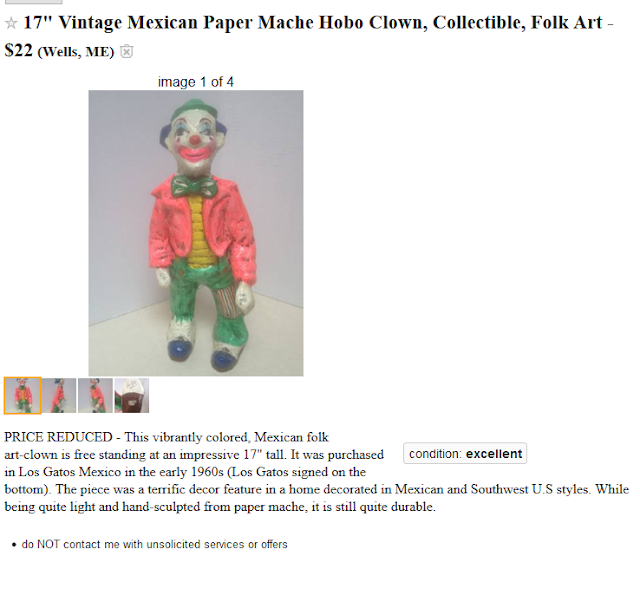 People seem to think Stephen King is a good writer. I don't. I don't even think he's a writer. He just lives in Maine, looks out the window from time to time, and writes it down. That's not writing. That's typing. 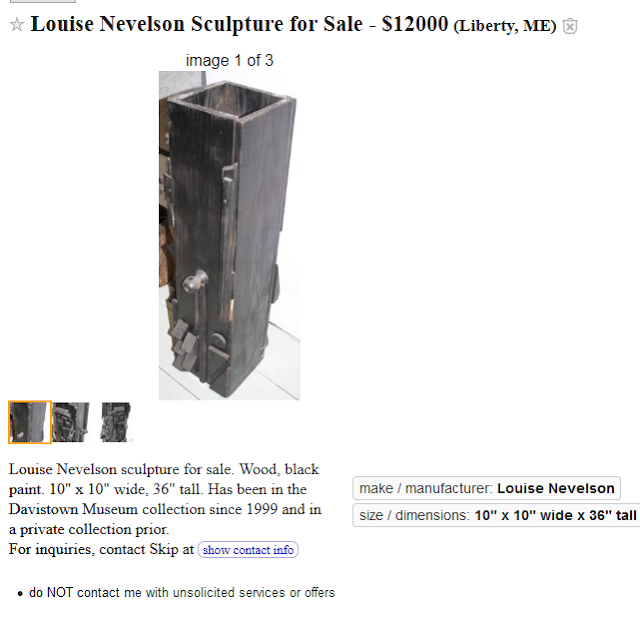 This Craiglist poster must be "from away," as Mainers so charmingly refer to anybody that wasn't born in Maine. What gives it away, you ask? The description. That's no way to appeal to a Maine connoisseur. An Augusta aesthete. An Edgecomb epicure. A Bowdoinham bon vivant. That unique selling proposition isn't going to fly with a local. You've gotta put in some features and benefits if you want to sell a thing like that in Maine. He tried to pull it out at the end by lying and calling himself "Skip" to sound like a normal person, but any true Mainer can see through a flatlander ruse like that in an Umbagog heartbeat. He shoulda tried something like:

Louise Nevelson sculpture for sale. Wood with black paint. Will burn pretty fair in a stove during shoulder season. Black paint ignites well. BONUS! You'll be able to salvage a perfectly good doorknob from the ashes. No swaps.


And I believe I'm Princess Charlotte of Mecklenburg. As the immortal bard, Steve Perry, once wrote, "Don't stop believing." And I am dead certain that this guy had Journey blasting the whole time he was painting this.
Posted by SippicanCottage at 10:26 AM

That Nevelson is the most down-east Nevelson ever made. It is literally the worst sculpture this very bad and very eyelined "artiste" ever made. Burning would be much too good for it.

"I believe I am a good artist." Whoa. I hear everyone has a bad haircut, too.

I've been intending on visiting Maine for quite a while now, I may have changed my mind.

I imagine that love seat could be covered with a king (maybe even a Kim) size sheet and look pretty much kinda OK.

That there Mexican doll, now, is likely outaluck. Maine and Mexico are just too far apart(estheticly).

And the Nevelson thing. OK for a plant stand, but $12K? That's not gonna happen!

Still, it's that "do not contact me..." thing at the bottom of each of these that that convinced me to be on my best behavior, and not contact them folks. I stand firm, and will not give in. And I appreciate your kind indulgence in not giving out addresses, phone numbers, or e-mails. THANK you, Mr. Sippi, and give Mrs. Sippi my best regards.

"Mainers are incapable of projecting the false front of bonhomie that blarney requires."

This is the thing that keeps me coming back, time and time again. Now I'm going to be thinking about the requirements of blarney for the next year. Believe it or not, we had the actual end of the rainbow appear right here at my house this morning as the kids were boarding the bus. I had the little tykes in the front thinking of blarney gold as I spun it up.

God is responsible for the first spark, and then the ball is in your court. Keep spinning your blarney, please. It's pure gold.

Sam L.
Maine and Mexico are just too far apart(estheticly).

But only esthetically, as Mexico is across the river from Rumford. Really.

My gut reaction to a name like "Skip" is that "Skip" is from away, but spends summers in Maine at his house on the coast and on his boat. Thus "Skip."

I was in Maine last year to visit my siblings, who are from away.

I'd not been intending on visiting Maine for quite a while now, I may have changed my mind.

Well, I'm somewhat offended. First of all, Marden's is one of the coolest places on earth. We saw $8 LED light switches at Marden's for $1.97. And that mattress looks like it's got some life in it yet. Anyway, much of the stuff was coastal - flatlanders don't know nuthin

My wife and I change the name of everything we buy at Marden's by adding a "Mar." When you enter our house, you wipe your feet on a Marpet. My son sleeps on a Martress.

Don't ask us about that one time we ate Marlic. Just don't.