The Amway of the Mind 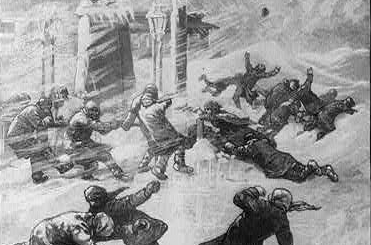 The object of life is not to be on the side of the majority, but to escape finding oneself in the ranks of the insane. -Marcus Aurelius

Kind of amusing to see an argument over who's to blame for a snowstorm that didn't happen. The idea that you were promised bad weather, and it didn't arrive, so you have been put upon, is comic when considered dispassionately. Then again, I've seen the internet. No one on the internet is dispassionate. Some start out pretty fair, but eventually out pops the cloven hoof.

It's especially piquant to see arguments about a snowstorm that didn't happen when you know for a dead cert it did happen. The wind blew 50 MPH, which made it hard to measure what fell. It was somewhere between sixteen inches and two feet at my house in western Maine. When sixteen inches of densely packed snow is delivered at Jimmy-Carter-era highway speeds, you notice.

For the first time since I've lived here in Maine, I had to begin shoveling snow while I was still standing inside my foyer. I opened the front door, and there was six inches of snow against it, even though the door lives beneath an eight foot overhang. It took a little while to simply shovel my way to a place where the crystal blue sky was above me. That was unusual.

Blizzards are funny. Like city dwellers, blizzards just put snow anywhere they like, without a care for the neighbors. There was no snow on my roof to speak of, because the wind blew so hard that it couldn't linger in the open. On one side of the car, you could walk up to it and open the door. On the leeward side, the snow was level with the roof. The blizzard had a sense of humor, and it filled in all the slit trenches I'd dug in the snow that came before. Snow likes equanimity.

Where my driveway met the road, the snow was up to my chest. It was compact stuff, too, and it required you to stand in one place for a long time and throw the snow some distance to make headway. It was honest work, and I didn't mind it. One chews a mental cud during such exertions. I wondered what frame of mind would make people angry about a storm that didn't come. I wondered more about anger about a storm that did come, but you denied its existence.

I am not real to those people, because I am not on television. They have joined an Amway of the mind. They sell their worthless factual surfactants only to each other. Eventually, when that doesn't work, they end up selling their intellectual soap to themselves, but still think they're going to get rich on selfie commissions.

Every once in a while, they'll invite someone who looks impressionable to join their little covens, but for the most part, it's a closed shop. You do not exist because you do not buy their soap, and sell it back to them in return.
Posted by SippicanCottage at 9:22 AM

I'd been wondering what you've been doing. Now I know: Shoveling snow and contemplating absurdity. Damn fine job of it, you've done!

"Amway of the mind" - I like that. Went through a very brief attempt at pyramid scheming when I was young and stupid and my cousin with her imagination full of wealth grown by the labor of others talked me into it. Every dumb kid should try it once, just to see what happens. If they're lucky enough, they'll get burned fast and the scar will remind them that no normal person ever got rich or popular by constantly pestering their friends and family to buy (and sell, most likely to the the same group of friends and family) stupid stuff at inflated prices.

Then again, more than a few people never seem to learn. They just figure all the failing versions they've tried just haven't done the pyramid the right way yet, but the idea is perfect on paper, so maybe this other "multi-level marketing" version will be the one to make them rich instead.

I love Sam and Julie, and don't care who knows it.

Beats shoveling the other s word like all our betters in D.C. and London.

Tomorrow is the first day of spring and it was 97 today. It seemed unusually cruel until I read your story. It will cool off to perfect 70's later in the week..I hope your storms stop soon, as well. You have been missed.

While one may complain about the accuracy of weather forecasts today, they are much better than they were a half century ago. Moreover, it is better to have worst case scenario presented instead of a blue skies prediction, so people can be prepared.

Which reminds me of the few times I have watched TV weather forecasts in TX. August in TX is very predictable: high of 97-105, low of 77-78, no rain for a month. But TV weather forecasters do their best to interject drama into what is actually rather monotonous. For example: "There is a cloud a hundred miles away. Maybe just maybe maybe it will turn into a rain cloud." But the chances of that cloud turning into a rain cloud in August are infinitesimal.

When there is the occasional winter ice storm, TV weather acts as if the bomb has been dropped. For TX residents who came from the Northeast, this is rather comical.