You'd Never Guess as Much, But 'Stopples From the Silurian' Is the Name of My Plasmatics Tribute Band. But I Digress 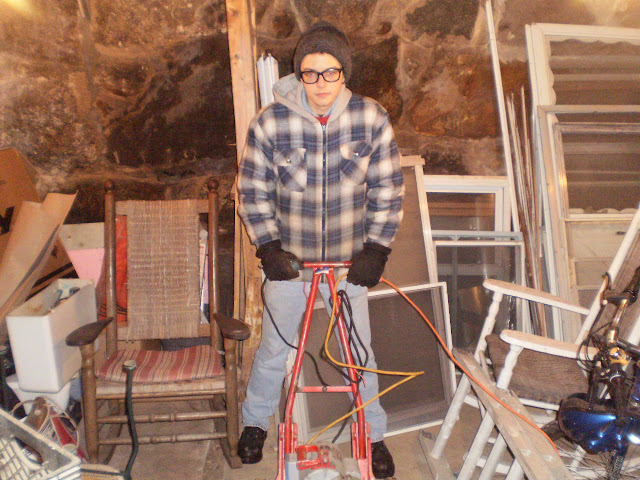 I was no longer speaking to my son.

We hadn't had any sort of disagreement or anything. I like him a lot. If I didn't know he was my son, and I met him, I'd probably like him even more than I do. Because I know he's my son, I can espy resemblances to me, and that makes me discount his good nature a little, I'm afraid. I don't like myself as much as I like him.

No, it was simple weariness that had set in. It gets boring saying, "Go. Stop. Go. Stop." It's tiresome to say. It's tiresome to consider how tiresome it must be to hear. I slowly began to simply grunt, and after a while I just jerked my thumb this way and that to get the message across. He's perceptive, and he anticipated things once we got going, so even my thumb got a rest.

Most of construction is logistics. Shelter shows demonstrate very little construction. They show a host that's not a real worker pounding the last nail. They never mention that getting to that point is the real work. It's easy to nail off a sheet of plywood on a roof. Get that thing up there in a 10-MPH breeze, by yourself, and I'll be impressed. If you've ever done real construction, you quickly learn how to arrange your surroundings to make the work go easier.

Well, I know a little about construction, but that just added to my annoyance. I was in no position to bring ergonomic calm to my construction chaos. I was working below my feet, the absolute worst way to get things done. I knew enough to sit instead of crouch, but my back was screaming at me. Reversing the cable feed in the sewer auger was a kind of relief. I could sit up straight a bit.

Of course that relief comes at a price. The cable was going to come out of the pipe, and it was going to bring things out with it. You don't visit Beelzebub's Disneyland without exiting through the gift shop. Over one hundred years of other people's foolishness could appear from that pipe. I jerked my thumb to indicate REVERSE, held on to the whipping cable to avoid a proper drenching, and prepared to be surprised.

Out they came. The feminine pennants snapped in the breeze from the yardarm stay of my drain augur cable. Dracula's teabags. The things no man is supposed to buy at the Rite Aid. Tampons emerged like an army on the march.

Now, it's not up to me to decide exactly how tough a tampon should be. Smarter men than I have determined that feminine hygiene products should be able to withstand a shotgun blast and an acid bath at the same time. It's a given that they should be more durable than space shuttle tiles. Fall protection harnesses and parachute cord should be made from the little strings, if you want them to last. Kevlar? Pfffffftt. That's OK for stopping a high powered round and all, but if you need real protection, head to Walgreens and sew a vest out of these babies.

Every length of the sewer cable is ten feet long, and each one appeared from the poop soup with twenty-five or so little Tampax ornaments whipping around from it. I took a pliers and grabbed each one as it emerged from the pipe, but they held on like grim death. Some were tangled four or five in a bundle. I was required to return the machine as clean as I'd found it, so they all had to be yanked from the cables. They fought like Japanese army holdouts in a cave.

We pulled out fifty feet of cable, and the little devils made a substantial pile at my feet. I shoveled them aside, and we sent the cable back down the pipe. The second round brought out more than the first trip down the pipe. I could have stuffed a futon with them. I've slept on a futon, if you can call that sleeping. I just assumed that's what a futon is stuffed with. I could be wrong. It could be dead cats.

I quickly realized I wasn't playing Current Events. The little pillows were ancient history. They didn't say Johnson and Johnson on them. They just said Johnson, talk to the Old Man. These were bungs from the Baroque, Always from the Jazz Age, postwar Playtex, Tampax from the Tang Dynasty, Ottoman Empire occlusions, Seleucid sanitary napkins, and stopples from the Silurian. This was a museum, not a sewer system. I wondered if I could get some kind of grant to look them over and catalog them.

I began to suspect that hunter-gatherer societies had been flushing these things down my toilet. The former residents of my house must have invited people over to join in the fun. They probably ran ads in the Grover Cleveland Craiglist to come on over and flush your troubles away. It seemed like a determined effort to my eye.

My son and I went back and forth, fifty to sixty feet of cable at a stretch. I don't remember how many times it took. When we were properly lulled by exhaustion and repetition, it finally came. The magic sound. It was the sound a nurse hears while walking down the hall in the nursing home late at night. A horrible gurgle, as the whole organism lets go and slides away to a better world. The poop in the pipe was gone.

Reminds me of a greeting card I saw some years back--an old grizzled cowpoke sitting on a rock, saying "There's a lot of things I didn't know when I took this job", and a line we used in the service, "You knew the job was dangerous when you took it."

And you, Mr. Sippi, have fought the good and really bad fight, have persevered and won. You likely don't feel much like winning, yet, I suspect, but I'm sure Mrs. Sippi appreciates it, and YOU, one whole heckuvalot. Maybe even 3 or 4 of them.

You could write a book about this. I can see it now, titled "Down The Drain, And Back Again".

At last, the tunnel at the end of the shite. Damn the tampon-edos! Full flush ahead!!

Did Melissa Harris-Perry or her posse visit the 'hood?

Not long enough ago, called out to investigate a blockage, wasn't in the city line though. Subject property owned by a lifelong bachelor, rented by a young woman with a child.

Informed by Mr Bachelor that he found evidence of drug use by the renter, and would we like to see the evidence - it was in his trunk, pulled out of the sewer line.

Yep. There it was. A line that looked Just Like Used Tampons, but he was certain they were joints.

It was then that I knew a career change was imminent.

Those things on strings will stop a grinder pump that is strong enough to eat a 2X4.
Then it is needle nose pliers and a very sharp knife time.
After you pull the pump.

i know well that gurgle and well i like it. i once snaked a line that didn't produce anything and was totally mute. i got it flowing and to flows to this day but i remained nervous for many a week

So, what sort of augeries did you read in the tea leaves?

Caligula's haversacks, bovine brillos, herpified hummus...this is fun. You've invented a new party game. While you suffer, we play. And laugh. But, with no small measure of respect.

Receive the gifts of fortune without pride, and part with them without reluctance.
- Marcus Aurelius

Is that a block rock wall behind the lad? Or just natural bed rock with grouting to keep the world out? It looks like it would make a very nice room wall of a den.

If you weren't poverty stricken in Maine.

No condoms mixed in with tampons? A rental house of ours had septic problems after a year and a half of a young woman tenant. I can't say she was a Lady, unless it was "of the evening". Must have been a goer, for the amount that was blocking. Most certainly wasn't from the previous owner, a 90 year old widower.

I've done drains and neatly tied up disposable (not down drains!)nappies but had to face the horror you describe....plasmatics, you do like to get out there!

The son is saying something like, "Mmmmphgphsfzzz yuuuuuukssmthhhhhrp" and thinking T. M. I.!!!

It's a good thing you didn't find one of these:
https://www.google.com/patents/US6183428
And surprizing Gerry vanderLoony didn't send this to you, as he posted it and I just found it there.

Speaking as a woman who has worked in office buildings primarily inhabited by women... yeah, there is a small percentage of women out there who are under the impression that everything can be flushed down the toilet. (Especially those towelettes that claim to be flushable, but aren't really.)

Every so often, the other ladies would find out who was doing it, and try to have a little talk about physics and the diameter of pipes and sewers. Almost without exception, the responsible parties would fail to believe that their behavior was stopping up the pipes, even when confronted by evidence. They generally had to be told that there was a rule that they had to throw this stuff in the convenient trash receptacle on the floor or wall of the stall... and even then they complained.

I do hope to find, when you publish the next episode, that in putting it all back together, you did everything necessary to avoid this problem in the future.

Such as: Installing numerous cleanout plugs, digging up the horizontal line to the city sewer and establishing the correct slope, including a CIPP pipe liner, grinder pump and bar screen, a TV screen in front of the throne with a 3 minute looped continually running educational video on proper tampon disposal, an emergency bypass to the neighbor's line and last but not least, a kegalator to assure adequate liquids be consumed by all users of your newly modified system, hence improving the liquid/solid ratio flowing through the pipe.

And that is why I no longer flush such products. (I don't even flush the hair I clean from my hairbrush anymore.) Once you have paid someone to clean those pipes, you want to avoid spending money like that ever again.

Er, I dunno Sipp. Thin ice dancing around them articles of female hygiene while joyously singing the Schnitzelbank. Why? because women.
I wouldn't try passing them off as dead mice either. PETA has a separate section for rodents.

Best to bag all that detritus in those fancy trash bags that won't break open until the space archaeologists do their layer studies.

Yikes..... All they had to do was read the instructions on the package which indicate that flushing them is a bad idea.