The Charles Calthrop MacGuffin School of Plumbing, the Universe, and Everything 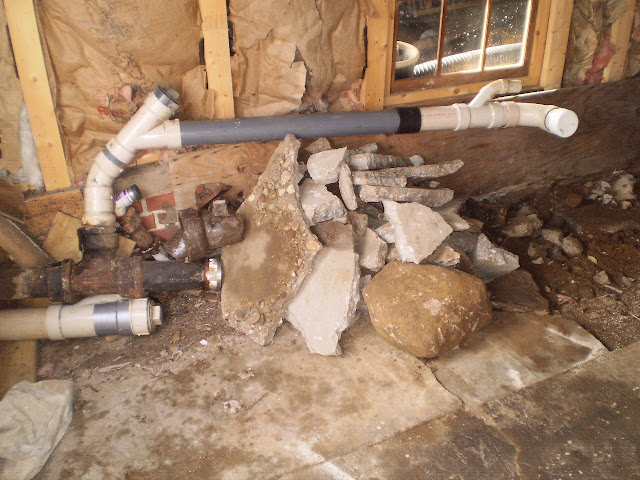 Everyone in my comments is quite wonderful and I love you dearly. I know many more people read and say nothing, and I love them just the same. There is no unifying theme in my blog, just like it says on the masthead. There's no way to know what you're going to find here when you visit. For long stretches, it could be nothing. But some people stick with me, and enrich my life with their attention, and for that I am grateful.

I feel as though I need to take a small detour (there's a surprise), from plumbing into cinema. Well, not exactly film making, but storytelling, I guess. I'm enrolling you, without asking you, in the Charles Calthrop MacGuffin School of Plumbing, the Universe, and Everything.

The news gets worse. I enrolled you two weeks ago, and didn't inform you. Yesterday was a pop quiz. I always hated those. I skipped school 9 days out of 10, so I always got an "F" on pop quizzes. I wasn't there to take them. Don't worry, you didn't fail your plumbing pop quiz. Everyone gets an "Incomplete." You said friendly, intelligent things about my problem. Unfortunately, intelligent things don't have anything to do with it.

You see, intelligent people believe that genius is the ability to know fact from falsity. It is not. Genius is the ability to see important relationships in seemingly unrelated things. Genius can choose between competing true things to find the only important true thing. If you have a hard time telling the difference between true things and false things, you can't even play in that league. If you become fascinated by minutiae that you think is true, but wouldn't matter even if it were true, you're likewise not playing genius checkers. You just end up calling everybody sheeple, and instructing them to WAKE UP about the gold fringe on the American flag in courtrooms, or breathlessly misremembering a misreported statistic about the number of icebergs remaining for polar bears to commute over.

In storytelling, a MacGuffin is a something that seems important but isn't, but becomes important because everyone mistakes it for an important thing. Don't bother trying to look up MacGuffin on Wikipedia. The definition they offer is a MacGuffin. The writer, and the persons they quote, -- except Hitchcock -- don't seem to understand what a MacGuffin is, but they sure are fascinated with it. From what I read, even Steven Speilberg doesn't understand what it means. It's not a red herring, which serves as a distraction only. A MacGuffin can't turn into something important later on in the story after being mundane for 400 pages, either. Making a MacGuffin magical or useful at the end of a story is a deus ex machina -- god from the machine. Make up your mind what kind of story you're telling, will you?

The best example of a true MacGuffin I can conjure up right now is Charles Calthrop from the superb movie The Day of the Jackal. An assassin has been hired to kill Charles de Gaulle. All the authorities know is his code name: The Jackal. The French police ask around Europe, and a security officer in England tosses out the name Charles Calthrop, an arms merchant suspected of being mixed up in another assassination. He then makes a supposition: In French, jackal is chacal, and he wonders if chacal was chosen by Cha rles  Cal throp as a sort of inside joke. The coincidence is too juicy to ignore.

The authorities discover a Charles Calthrop who is away from home without explanation, and they figure it has to be him. They put themselves in his place, and try to figure out how he'd go about getting false passports and all the other accouterments necessary to kill a foreign dignitary. They follow the trail wherever it leads, hunt down the Jackal, and kill him at the last moment. The movie ends with a detective sitting in Charles Calthrop's flat, musing over the case, when Charles Calthrop enters and angrily asks what the hell is going on. The perfect MacGuffin, that.

I stood in my basement -- cold, tired, under incredible pressure -- and sort of turned my nose in the air like an animal. Not smelling anything, thank God. Aware all of a sudden. In Hitchcock's original explanation of what a MacGuffin is, it's a suitcase. It's a real suitcase, and everyone's fascinated with it, but there's nothing important in it. My plumbing project didn't have a MacGuffin. It had the equivalent of an airport baggage carousel of MacGuffin suitcases going around in a circle.

I had a moment of clarity. I knew that in 1901, people didn't act like idiots the way people do now. They did the best they could under the circumstances they were in. People being people, they would have acted insane if they were allowed to, but back then, there was no way to get others to subsidize your idiocy. In today's world, you can believe any damn thing and get away with it. Back then it was instantly fatal, sometimes literally so. I decided to rely on the fact that the people who built my house knew what they were doing, but had limited resources. I believed that everyone that had taken a crack at my house between the builders and me had no idea what they were doing, and they had comparatively unlimited resources to indulge their foolishness, which would throw me off the, er, scent.

I went to the opposite side of the basement from the main sewer pipe, where the tiny pipe had geysered excrement all over the concrete floor and started our story. I took the sledgehammer and went at the floor with everything I had. My son watched me and thought I had gone crazy, I imagine. He began to lift the broken concrete out while I hammered away like Ben Hur at an oar. We took out maybe 20 square feet of concrete. "Dig!" We excavated next to the insane Rube Goldberg piping contraption someone had installed to put a stupid sink in a stupid place in a stupid way. We followed it down, down, down. All the while, I did the arithmetic in my head, the same arithmetic a grammar school dropout in 1901 did in his head when he built my house. One-quarter-inch of slope per foot of run, twenty-five feet of run, it's going to be deep, this thing, SHOVEL!

There it was. I didn't have to dig all the way down to the sewer pipe, the one leaving my house on the opposite side of the building from where I thought it did. I found the broken-off remainder of a sewer cleanout after digging down a few feet. Some mouthbreather had dug it up, broken it off, plugged it with a crazy concatenation of fittings, and then used it as a sink drain. Then they buried it under two feet of soil and covered it with a concrete floor like a cretinous icing on a cake of foolishness.

The odor wafting out of that 4" cleanout pipe was staggering, and it was filled to the brim with a substance that resembled the contents of the communal hot tub at an overcrowded leper colony. It looked and smelled like Perrier and rosebuds to me.

[to be continued]
Posted by SippicanCottage at 12:50 PM

I'm guessing you used 99.44% perspiration and 0.36% inspiration. While holding your nose.

"... like a cretinous icing on a cake of foolishness." All by itself, this has made reading about your plumbing woes worthwhile.

Genius, Mr. Sipp (I really hate to say this to a guy that knows he's smart; it can lead cause smugness, swelling, and erections lasting more than four hours).

It is indeed an excellent movie. It is the only movie I've ever watched where I find myself cheering both sides, the Jackal and the Inspector, at the same time. More astonishing, it happens on repeated viewings.

FWIW, in your current situation I'm cheering only for you.

The ear worm in the room is the sudden realization this main appears to be intended to drain in the direction of the street, out the front of the house, beneath a pile of dirt that is some two stories higher than the Igor-spec basement slab. No way. This thing has to make a 90deg turn somewhere uphill of the clean-out and sensibly make its way back downhill once clear of the side of the house. When the old girl was built, the toilet must have been "too close in the summer and too far in the winter". Where would the presumed retrofit have emptied? Is there a creek out back? So many questions.

You're as cunning as a newlywed Vera Miles; misleading me that way...but at least I predicted you'd beat the system.

Now, the plot has thickened.

Having to deal with a badly fitted toilet pan myself recently reading this made me feel less alone in the world.