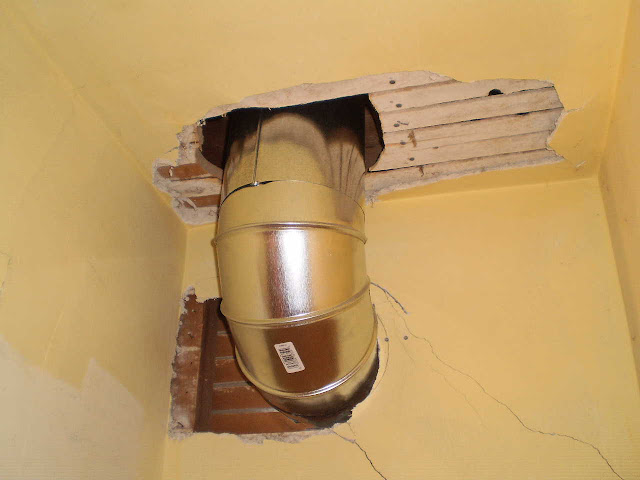 I know it sounds like a tough transition, but I believe I can tie my heating ducts into my sewer pipe. You might wonder why I would want to do that. Well, I didn't. I wanted to save my widdle pennies for a longish time, buy some tin, and knock it in place. It was supposed to bring heat from my dining room, where my pellet stove resides, into my children's bedrooms, where my two human bowling alleys reside. It was a good plan, as it turns out. Better than I anticipated, really. But then I had to go and tie it in with my sewer.

If you're wondering where I've been for a couple of weeks, this should explain it. Sh*t happens, as they say. The "they" who say that have no idea how much merde happens when merde happens. I know for a dead cert. You see, my older son and I put that heating duct in, easy as you please, two days flat, soup to nuts, and it worked like a charm. Perhaps, another day, I will regale you with amusing anecdotes about self-tapping screws and foil duct tape. Wax poetic about galvanized HVAC starting rings and six-inch diameter round duct 90-degree saddle take offs with gaskets. Become rhapsodic about Cubic Feet per Minute and British Thermal Units. It's bound to be the entertainment equivalent of a slideshow of vacation photos of Luray Caverns presented by an uncle with his pants up under his armpits. Haband slacks, natch. But for now, I'll need you to take that part as read, believe me when I testify under several oaths and some Anglo-Saxon words that I succeeded, which will allow us to move on to explaining my reference to offal awful quick.

You see, it was Sunday night at 10 PM, we had just got that duct in, and we had configured a fan to commence blowing warm air through it, easy peasy. The children's rooms were comfy all of a sudden, and I was looking for laurels to rest on. Before I could put myself outside a beer, I was required by common sense -- a little -- and plain fear -- rather more -- to descend the three flights of stairs that separate the top level of my house from what we refer to as the carhole, the elegant name we have for the basement below the basement. We had been cutting ductwork down there with an abrasive wheel fitted to a grinder, and we had to check that stray sparks didn't ignite anything, which would make the house too warm and dash my BTU calculations all to hell. Everything looked copacetic, and we were picking up the tools in a desultory fashion from the frigid concrete floor, when we heard water running. That's bad, because the carhole doesn't have running water.

I walked around the 99-percent finished rowboat I've never launched that we keep in the carhole instead of cars. It doesn't trouble us to keep a boat that never floats in there, because we don't own a car anymore, just a truck, and the truck doesn't fit through the door in two directions instead of just one dimension like the car didn't fit when it was still not fitting in there instead of fitting in the junkyard just fine.

And there, coming out of the floor, was a geyser of excrement.

[to be continued]
Posted by SippicanCottage at 9:15 PM

Email ThisBlogThis!Share to TwitterShare to FacebookShare to Pinterest
Labels: Bits of my life pulled out and flung on the Internet floor, HVAC, Maine Family Robinson, plumbing

Leslie, you stole the thoughts from my brain.

I take it the smell (if not more) or the excrement entered a long(ish)-term arrangement with a fan? El Bummer!

I was taught never to laugh at someone else's misfortune, but your way with words is making that offally difficult.

Already, this is reminding me of the day that either the part A or the part B of the two-part epoxy had been manufactured according to specs meant for something else, and the stuff never cured. Different field, same plow. Here I go to read part two.

Hi everybody. I am reminded how many lovely people I've met because I write on the Intertunnel. Present company very included.

I'm about as handy as the thumb I nearly cut off with a table saw. I'm struggling with the concept of using the sewer pipes as heating ducts. It reminds me of my sons super power of farting soon as the car door shuts.

Hmmm, when you suck air out, something will get sucked in, right?
When I lived in Newfoundland I installed a pellet stove but I ran a parallel duct down the chimney (it was an insert) for heating air. This also had the effect of preheating the air as it descended almost 30 ft.
I drilled a two and a half inch hole in the back of the fireplace and ran a separate combustion air duct thus insuring a positive pressure in the house. Snug as a bug in a rug and I heated 2100 sq ft on a forty lb bag of pellets a day. NITMOI.