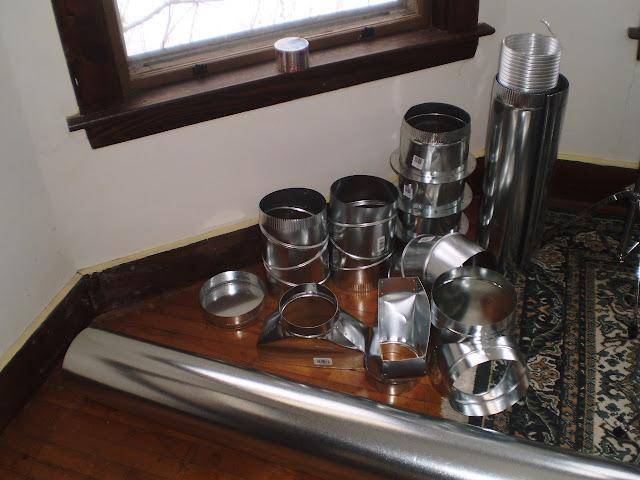 Just kidding. I've always wanted to write that "must credit" tagline on something I wrote. Of course on the Intertunnel, "must credit" doesn't mean much. No one has had more stuff cribbed from them without attribution than me. This astronaut monkey joke alone would have made me the most famous blogger in the world for a day or two, if anyone in the regular media gave credit to where they found things. I don't really mind all that much, because it frees me from any residual obligation to do likewise.

That's not really the Tin Man's autopsy. It's more like a snapshot from the Tin Man's mom's fertility clinic. What you're looking at there is heat for my kids' rooms. Some assembly required. Not the kids. My wife and me assembled them a while back. It was pretty fun, what with both of us being drunk at the same time for a change. No, I meant the heating system requires some assembly. More than some, actually. It requires invention, and then assembly.

We don't have central heat in our house. We live in western Maine, and it gets pretty cold here -- in the summer. In the winter it gets pretty cold, too, or so I've heard. We've managed to make it through five going on six winters by hook and by crook heating. We burned firewood for a while, but we could never afford enough, and the house ended up unheated whenever I fell asleep. I'm a bit of a sissy, and I fell asleep once in February of 2014, and was ashamed for weeks afterwards.

Now we heat our house using a Vogelzang VG5790 pellet stove. It puts out about the same amount of heat as our woodburning furnace, but it can run for a couple of days at a time when it's loaded with wood pellets. The pellet stove is located in our dining room, which I use for my office as well as the fancy eatin' parlor.

The distribution of heat in a house is an arcane art. Your average plumbing and heating dude's solution to every plumbing and heating problem is a massive outlay of money spent on an increasingly complex heating system. It never works, you're always too cold or too hot, and the repairman is in your basement enough to pay you rent.

Luckily for us, we're really poor and just want heat. We can't afford complexity. But we do need to get the heat from the pellet stove upstairs into the kids' bedrooms. Our house is over a hundred years old, fairly large, and insulated by a man with a cane and a dog. Our solution for the last five years has been to shiver and wait for Spring, which comes on July 4th in the morning, giving way to summer in the afternoon, and then around dinnertime the leaves start to turn.

The kids rooms have electric heat in them.  During the months of December, January, and February we used to turn it on and abandon any hope of heating the hallway outside their doors. We also abandoned any hope of solvency. Five years ago, when the electric heat was all there was in the house, I once got an electric bill for $900 for one month, and we slept with our clothes on. I live less than a mile from a hydroelectric plant, about five miles from a copse of wind turbines, and down the street from a paper mill that produces "black liquor" for power generation. That's a form of biomass fuel made from the lignin left over from papermaking. All that eco-friendly power generation gets you an electric bill with more zeros on it than a Carnival cruise.

So my  mission this year is to distribute enough of the heat from the room with the pellet stove to the kids rooms so that the electric heat doesn't need to be turned on any more. That pile of Tin Man entrails represents my plan to do so. Will it blend? Only my hairdresser knows for sure. That's because she sleeps with me in my (unheated) bedroom.


(to be continued)
Posted by SippicanCottage at 1:20 PM

Old Sippican never did give nothing to the Tin Man
That he didn't, didn't already have
And heat never was the reason for the grieving
In the tropics of old Rumford Maine.

I love it. According to the article below, the accumulation of dying wood (lignin) during the Carboniferous period resulted in 90% of the coal burned today.

I grew up in New Hampshire, and most of my memories of childhood involve crawling on the wood pile or hanging out by the woodpile while my dad was chopping wood. Because we, too, had electric heat.

It's amazing how expensive all of those sources of "free" electricity are.

I was visiting a 300 year old Scot's House in Upper Canada, less northerly than yourself. He was one grouchy old dude at 300, but I digress.

My host said in the winter they light the fireplaces at either end of the house and hope for the best! Thermal engineering at its finest. I imagine they canvassed the neighborhood for wood from houses where the residents had died of cold already.

OK. I'll leave the writing back in your expert hands. Thanks for the fun.

When I electrical contracted in Toronto I was with a crew that specialized in upgrading 100+ year old houses. I noticed that some of the common rooms atop one another had passive heat gratings connecting above and below. Often times there were still gas pipes to each room and I suppose they got used for small heaters, shrug. A few of the bigger ones had servants' stairs at the back of the house and narrow stairs up to servants' quarters. An open chute, maybe 2'x2' from top to bottom for laundry, trash, I dunno what else. there was usually no heat to the third floor, it got warm with whatever they could gather from the lower floors.

Ten months winter and two months bad sledding is what it sounds like, you live there.

Wow, it must be nice to live down there in the banana belt. Summer here, in North Pole, Alaska, is usually August 13th or so at 3:05 P.M.

It's a warm -14° F. right now but none the less, I just threw some more wood (and political flyers) on the fire

I'm now in my second winter in a house that has 9" grates to allow the heat to move from down to up. I find it doesn't work very well with the bedroom doors closed, so I'm thinking that the open stairwell is part of the convection design. It works really well down to outdoor temperatures of -20°C or so, then the convection can't keep up with the loss through the walls and ceiling. So we leave the interior doors open during the day, and carry our clothes to the downstairs bathroom to dress after our showers in the morning.
One change from what I presume to be the original setup was that an internal spring-damper has been removed, and I see from researches that this could have been held open by a low-melting-point link, so that in event of some sort of thermal runaway downstairs, the heat and smoke would be blocked from transit up. This is something I intend to restore, but the places where such things are readily available are expensive with expensive shipping, and the places where such things are cheap tend to only have them in stock infrequently at random.
I've yet to figure out how a previous owner managed to put in both new-windows and vinyl-siding with foam panels and tyvek behind it, and yet still leave the house so drafty. From the windows and closed-cell spray foam on the rim-joist in the crawlspace I'd gained the impression that I was getting many expensive efficiency upgrades included in the cost of purchase, I begin to suspect that i was deceived. Oddly, the un-messed with upper-floor with original plaster and loose-fill cellulose is much tighter than the renovated main floor with recent sheetrock on all surfaces.

You may want to check into it! :P

I have a Big Buddy heater set in my hallway when the outside temp goes subzero, and a small 6' fan clipped to the top of it directs heat into my bedroom. Keeps everything in the upper 50's at least - on low power.