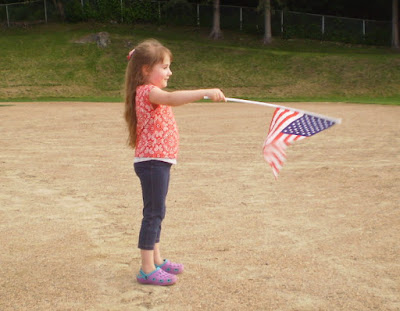 My two sons, AKA Unorganized Hancock, performed for the July 4th celebration here in Rumford, Maine.  They stood on a stage just behind the pitcher's mound at Hosmer Field, facing center field. The basepath was like a moat between the audience and the stage, and putting the band on a riser underneath a tent made everyone watch their knees perform for 40 minutes or so instead of their heads. Ah, the music business. It's so glamorous.

The boys brought their own PA system, but one of the other bands has already set up theirs, and they were kind enough to let everyone use it. They had piled eleven speakers on the front of the stage, giving the whole construction a kind of machine gun emplacement vibe. I tried to take a video of the boys through the mail slot that was left over. We'll see if it turns out OK. 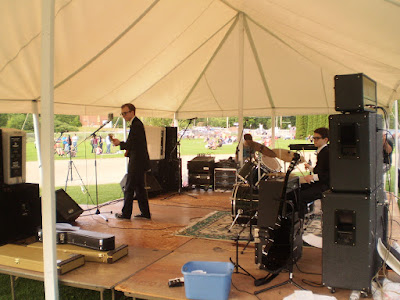 The kids played great. Miles broke a string twice during the set, and Garrett just kept playing while his brother went and got another guitar and then picked up where he had left off without missing a beat.

"I probably shouldn't tell you this, but I drink brake fluid."


**Nervous laughter from the audience**

I never get tired of watching the boys perform. They received a nice review on a local man's Facebook page:


"At any age, UH would be a great duo, but at 19 and 12 respectively, Miles and Garrett are far ahead of many other bands. They're musically clean, rhythmically tight, in tune, on-key and have excellent stage presence, and even though they are covering tunes we all know, they still manage to make each one their own. These guys have it."

Yes. Yes they do.

Posted by SippicanCottage at 2:54 PM

Short. Clean. Funny.
Now that right there is the funniest joke I've heard in a long, long time.
Thank you, guys.

I can hold it in no longer: Garrett has Miles to go before he sleeps. Being a Man of Mystery, I don't understand myself, but I can live with that which be me.

19 and 12?
I have been reading your page way longer than I realized