The imp drummer drops his stick at 0:30. If I didn't tell you, would you have noticed? He never falters. Never hesitates. He reaches for another and keeps going. He's not wearing his jacket, which means this is from the end of the show. He'd been going like that for an hour and a half already. His hands are sweaty and his little arms are tired.

The Heir bangs that tune out like a pro. That's a dumb thing to say on my part. He is a pro, I guess. Or would be, if there was a place to be a pro at. He does a lot of singing in one night. In a larger band, someone else takes a turn. All he has to help him is a twelve-year-old drummer. He must be a Wallenda. If you miss, there is nothing much to catch you.

The boys are performing at the 4th of July festivites here in Rumford, Maine. 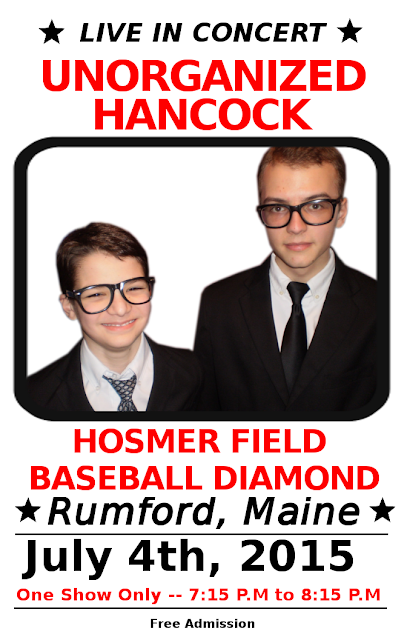 [Update: Many thanks to Kathleen M. from Connecticut for her constant support of our boys via our tipjar. It is much appreciated]

[Up-Update: Many thanks to Bob B. from Chicago for his generous support of my boys using the tipjar. He's a longtime friend of Sippican Cottage, and says he might visit someday. I advise coming in the summer, Bob. It's really pleasant, and it sometimes lasts for a whole week]

[Further Update: Many thanks to Kurt H. from Ohio for his generous hit on the boys' PayPal button. It is very much appreciated.]
Posted by SippicanCottage at 12:17 PM

Hummmmm..... are you sure the ghost of Buddy Holly wasn't your backdoor man.... twice?

Gerard!
I was remarking to my wife today how much my boy's performing mannerisms, not just the suit and glasses, are reminiscent of BH. The sideways pose, the shake of the shoulders, the way he's strumming the guitar. Of course the guitar itself is the same sort of brown sunburst Stratocaster BH favored. You wonder if it's a direct influence or filtered through 60 years of other musicians. I do know that there is nothing deliberate about it.

Of course you might remember that UH was born from BH, three years ago: Just Like Buddy Holly

It was after 0:30; took me two tries to see it, being after. Them boys is goooood, and getting better.

Any chance they'd try playing the blues, maybe as the M'Sippi Boys, so as not to confuse their fans?

Number one son does a bang up job there, George would approve of his gtr work or maybe be a little jealous even.

Sipp, sure would be nice if we could buy an audio CD of the band's tunes.