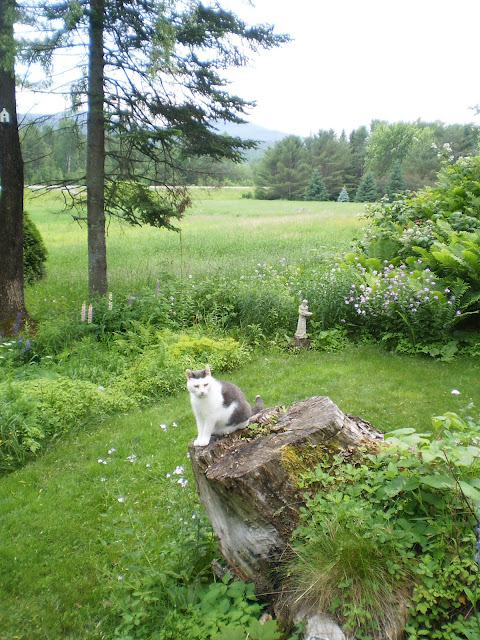 The weather has turned here in Western Maine. A few weeks ago you could still find disconsolate patches of snow here and there, loitering with bad intent in northeastern shade. There were frosts last weekend, down in the twenties at night. The frosts punished people that planted pansies and passed the slackers on by. The lilacs have pushed out their wan purple bottle cleaners to scent the breeze and draw their trinities of hummingbirds, butterflies, and bumblebees. The tree swallows have moved back into the house that's not supposed to attract them, for the third year in a row. The male sits on the roof to guard it while the female swoops and darts across the little meadow in the back, and she comes back full speed and goes right in the hole without pausing. Then her mate bombs across the meadow to get his share. It all seems so impossible but there it is, like everything under the dome of the sky if you're paying attention.  If you do not know the sky in Maine when June enters the dooryard you can never understand the attraction of this place.

It seemed to me that nothing would survive the winter. We had so many stray cats roaming around our yard last year we made names for them. There was Newman and Catzilla Junior and The Dishrag. Our old cat Momo has wasted away to two dimensions, and we feared that he would no longer be able to hold his own in the spring. He shambled out across the snow drifts in March and ranged over Puiia mountain and Rich's steps and Davis's tumbledown greenhouse looking for friction but found none. He sleeps untroubled on the rocker on the porch, all night, waiting for an adversary that never comes. He is the solitary king of a dead dominion.

My neighbor, as solitary as any cat, caught cold I guess. Winter takes its vigorish here whether you can spare it or not, and it took him. Pneumonia. I liked that man a great deal. He was friendly on his own terms, something that's common here. We would see him, rarely, as he came and went, and every once in a great while we would be passing by while he was outside, and stop to chat. He was salubrious in a way that is rare in this world today. He was in the military many years ago, directed a factory of some sort, was a policeman in a small town for a time, and did charity work when there was no other work to do. He lived all alone. He had a son who was in the military, too, in one war or another, the country doesn't seem to keep track of such things coming or going anymore, but returned home safe. Later he stopped to help a woman who was in danger when her car was disabled on the highway, and he was struck and killed.

My neighbor never spoke of his son to me. It broke him in some fundamental way. It did not diminish his generous smile when he waved as he mowed, but it put it behind bars somehow. His son is buried in a little boneyard near here on a quiet lane where we ride our bicycles. He wanted to be buried with him, but he had to wait because the ground was still frozen.

My wife and I pedal past the iron gates of the cemetery, the granite markers unread except by the gold finches that rocket through on their constant errands, and I look over my shoulder and wonder if I too am waiting for some great date but my ground is still frozen.
Posted by SippicanCottage at 9:57 PM

A fine -- I mean a really fine -- photograph and prose poem to match. As you point out, we're all fixin' to die, some faster than others, but in the end we're all in this together.

We're in it together, but we leave separately, mostly. Sorry to hear about your neighbor, Mr. Sippi.

On a lighter note, I'd recommend leaving your back yard looking that way. Mowing's a waste of time, and messes up the habitat for the wildlife. Critters need that.

Sam L.
On a lighter note, I'd recommend leaving your back yard looking that way. Mowing's a waste of time, and messes up the habitat for the wildlife. Critters need that.

If you do not mow for years on end, your meadow will eventually turn to forest. My NE hometown has 2-3 times the inhabitants it had when I was growing up there, but also has less farmland. Result: many places that were meadow when I was a child are now forest.

Ecological succession has been on display in NE for decades, even centuries.

This is a lovely obituary and you honored his memory better than most. Thanks for sharing.