The Island Of Misfit Temperatures 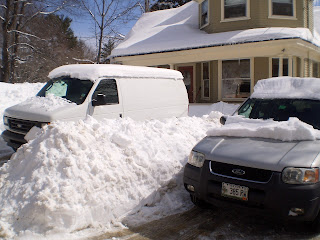 The obstinate and peevish weather gods dumped a foot or two of additional snow on us the other night. I try to walk in other men's shoes before cavilling about their behavior, but the weather pornographers have started naming every concatenation of snowflakes as if they were hurricanes, which is plenty imbecilic, but have apparently doubled down on their idiocy and named this particular one "Vulcan."

I know they all went to public school, and then attended directional state college and majored in leaving Solo cups on someone else's end table, but is everyone so illiterate that they don't know who Vulcan was, and where he hung out his shingle? I've noticed a predilection in "educated" folks to use the exact opposite of the correct answer as the answer to any question. Not sort of wrong, ever. Totally, dreadfully, 180 degress wrong about everything. You could not come up with anything wrongerer to name a snowstorm, but here we are.

We didn't shovel it yesterday, because the wind was raging at about 25 MPH, and the high temp was in the teens. When I got up this morning, it was 1F, but it wasn't windy, so we had at it. I told The Heir to just shovel out a couple of cattle chutes for the cars, and leave it be. There's nowhere left to put it anyway. At the bottom of the snow there's three inches of ice, and a shamrock we left out there a month ago.

I abandoned my office last November, because I couldn't hope to heat it. For a couple months, I typed everything on this blog and the others using the 32 inch television set in the living room as a monitor. I gave up on that scheme, and moved my desk into my bedroom, and write in there now. I still have a headache from December from squinting at the television, though. It's been very hard to move the thermometer in the house to reach 65, and when we wake up in the morning, it's often below 50 in our house, except in the childrens' bedrooms. What I'm explaining is: I know what the temperature is.

We do not get cable television service. I do not watch broadcasts of weather reports, which I find bizarre, anyway. I look at websites, and look for hard information. I've noticed that the daily low temperatures reported by the various weather channels often are naughty in some way; misbehave in some manner; commit weather faux pas of some sort -- whatever it is they're doing, the weather channel doesn't like it, and banishes these low temps to the Island Of Misfit Temperatures.

Every once in a while, to ensure I'm not imagining things, I take a screenshot of a random day, one that seems notable in some small way, and then I go back in a few weeks and see what the same people that reported that day's temperatures have to say about it when no one's looking. Here's March 4th, 2014: 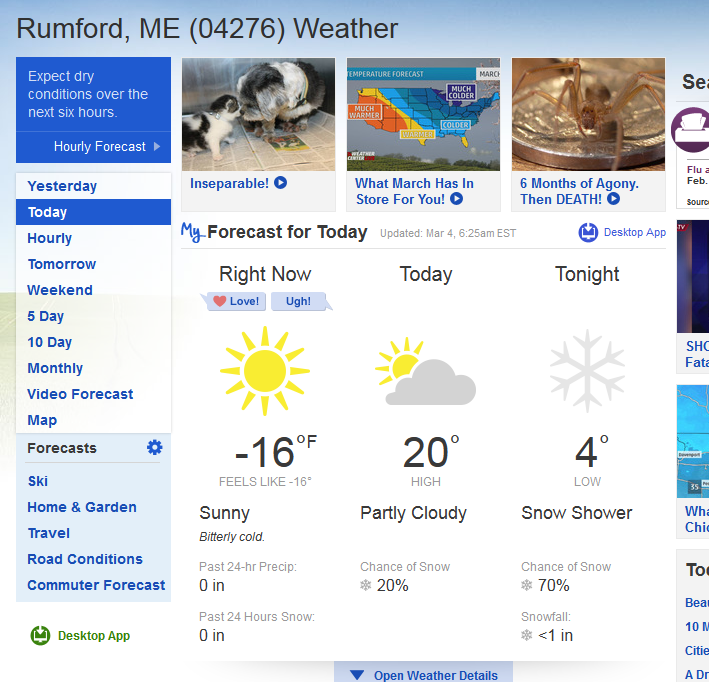 I checked this temperature with my two thermometers. It was right on the money. It wasn't even a notable temperature this winter. It's been twenty below quite a few times. I can tell you that no matter what sort of heating budget you have, and what sort of heating apparatus you've got, it's deuced difficult to raise the temperature in one room in your house 85 degrees above outside temp, never mind a lot of rooms. So as I said, I have to pay attention and pick my battles.

If you were to return to the Weather Channel's webpage today, and ask it what the low temperature was on March 4th, 2014, what do you suppose it would say? Please note that the sun was already up when they measured 16 below; it might have been colder just before I looked at it. But let's take their word for it, corroborated by my two thermometers. It was sixteen below. Until it wasn't:


Hey, look; there's March 4th. Oh, dear. It says the observed low temperature was 4 below zero. The low temperature the Weather Channel reported in real time must have misbehaved. It must have a bockety Carnot engine, or a misshapen Boltzmann Constant, or perhaps it got pulled over and taken to the pokey after it passed a thermodynamic State Trooper in the breakdown lane going ninety. Whatever its infirmity or transgression, it was sent to the Island Of Misfit Temperatures.

Won't someone have a care for the poor, shunned, lonely daily lows, banished to the Island Of Misfit Temperatures? Why if I was of a cynical mind, I might think that these poor low temperatures are likely to be offered the ultimate insult at the end of the year -- I bet they won't even let them sit for the class picture in the Global Warming yearbook, just because they're banished to the climate reform school.

Won't someone think of the chillren?
Posted by SippicanCottage at 1:51 PM

I cannot feel your pain. I do feel sorry for you all. I am reading The Long Winter to my daughter now, and I cannot feel their pain, either. I have never been that cold. We had no winter. But, summer is coming..

Oh suck it up. Do you have any idea what I have to put up with out here in Seattle where the temp, even now, does not go above 64 and it rains for at least an hour every other day?

Just man up and get that widowmaker out of the way.

That is rough. As I spent the first half of my life in southern NE, I have seen below freezing winters. But 20 below was rare. IIRC, it got to 20 below once during my senior year in high school- I was amazed my car started. I suspect that the year I was in first grade it hit 20 below a number of times, as I recall it was a cold winter.

The rain stopped this week. It has been good for riding. The Harley folks have migrated south to Daytona and are at this very moment roaring around the various bars and drinking establishments. You should migrate south for the winter.

I have been thru 2 and a half North Dakota winters up near the Canadian border, and that's why I no longer live there.

My daughter moved to Billings, Montana a bit over a year ago. They had two days that "felt like" -36. We've been below 0 a few times her in SE PA, but obviously nowhere near as much fun as you're having.

Having the poverty, I can relate to 'strategic heating' - keep the pipes and the bedroom warm.

well, the good news is that around here, several states below you, the weather is getting more fickle than it's been all winter. 18 Thursday, and 60 on Saturday, and they're predicting snow on Sunday.
So that surely means Spring is making it's way ever so slowly your direction, for it's annual 45 minute appearance.

I've never understood why anyone is willing to live under those conditions when the South has easy living.
I agree with the stupidity of giving a storm a name. The funny part of the weather forecast is when they say the high today is 62 and the current temperature is 65!
bruce wayne

My unfortunate spouse is ever alert to my rants about weather "reporting" on the idiot box; she has learned to bear it all in silent suffering. How do you get a job on the nationally prominent weather shows when you completed your climate change degree, only to teach each of us to pronounce an important word as "tempa-chure" ? Where else can you find so many giggly souls who managed to leave manic behavior rehab before the scheduled release date? Where is the shame? The upside to all of this is that jobs for the young of Maine are available here in the Mid-Atlantic as pricey trainers of winter driving safety....

I find it's not so cold if you measure the temperature in Celsius degrees. Or even in Centigrade. Kelvin and Hobbs do not belong here, that's an Absolute fact. Having declared all that, let me tell you that in southern NM our nights get down as low as forty degrees. Forty Fahrenheit degrees. Can't sleep outside when it's that cold. what we have, we got wind. average wind speed thirty MPH and purt near constant. One day the wind stopped blowing and all the chickens fell over.

In the service we called 'em Weather Guessers.

How do you think they create global warming?

It is not so hard to move a thermometer, if you get one with a magnetic mount. It can then be easily taken into any room within or without, as fancy strikes.

As to the reporters of climatic conditions it appears that you are afflicted with group B. Group A is well known for reportage of desireable skiing conditions, where if it was 29 F @ 5:00 AM, that is reported until 3:30 PM, although the interim temps hit 55F.

oddly though they are quite accurate and up to the minute when temps are in the range of 18F to 30F, updating continously.

Here's hoping your woodpile holds out till spring.

What will you do next year after Obie's banned burning wood?