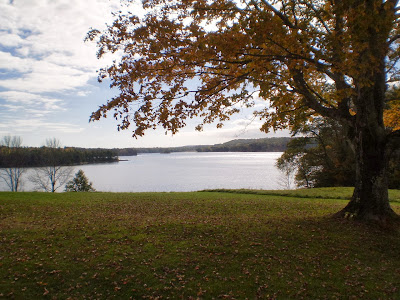 We went for a walk by the seaside by mistake. Just my wife and me. The sun tried to climb its ladder to its summertime nest, but it's weary now and falls a few rungs short. It hangs lower in the sky, and you can take the full measure of its power without worrying that you'll get too much. You'll dream of too much for the next six months.

The road dipped and swelled and swayed back and forth along the wide green pastures that rolled on down to the granite border of the surf. Walking along the margin between pavement and grass, you could see that a pasture isn't a carpet; it's more like clumps of grass, elbowing each other for room. A pasture is not a lawn. It was only shin high, but it looked like it could swallow you as easily as the surf. There were barns, well cared for, dotted here and there along the route. You could tell they'd been there forever. Really old barns don't have any windows. Their cedar shingles, gone silver with a fringe of black, were ready to shrug off another winter's weather, and many more after that.

The ocean's different here than the one I remember from my childhood. Cape Cod has flat patches of sand, slowly forming and reforming themselves into one hillock after another, sprinkled here and there with beach roses and dune grass. Someone surprised me once and told me that the roses, rosa rugosa, didn't belong there and are considered an invasive species; but so am I, and took no offense. Here in Maine, the water wears a stone belt, and the big pines and spruces often creep right down and lord over the margin between earth and sea and sky.

Oh, yes -- the mistake. We had parked a long hike from our target, and egged on by a local man that likely thinks the moon can't be more'n ten miles from here, we'd forgone a chance for a shuttle and we'd walked it to our destination. Half our party decided to wait and return with the bus ferrying people to and fro, and we decided to hoof it back. We made it into a desultory race.

We are seldom alone. There is no place to go without our children. But there we were, with nothing but the sun in the sky and the endless green pillows in the fields rolling down to the sea. We talked little about next to nothing, and didn't hurry, like contented diners with a cup of coffee going cool in front of them, unwilling to yield their table. People long married don't talk like they're on a date when they're alone, thank God. There's no need to prattle on. It's too late to try to impress anyone. No one can be impressed with you after they've heard you snore. We were alone, and together, and the world was a jolly place for the three hundred and fifty miles or so that fellow thinks a mile is.

We won our little race, going away, and spread a blanket on the grass and sunned ourselves for a little while, my head in her lap, with twenty-three years of marriage arrayed behind us like a chorus to murmur their assent.

Posted by SippicanCottage at 12:59 PM

"May God be with you and bless you.
May you see your children's children.
May you be poor in misfortunes
and rich in blessings.
May you know nothing but
happiness from this day forward. "

well done.
My wife and I celebrated #24 at the end of September by doing much the same thing.
an incongruous lake, far up in the mountains, with a rambling old comfy house all to ourselves.

People long married don't talk like they're on a date when they're alone, thank God.

Amen, and thank goodness for that. And I'll second Vanderleun, since he's already said it best.

Actually I was stealing from the Irish as all good poets know to do.

Beautiful. I wish you great joy.

Those kind of days make everything else worth the effort. File that one away for savoring.

Fortune, if not money (and I'm pretty sure of that part), has smiled upon you, Mr. Sippi, and Mrs. Sippi and the Sippilings.