My two sons, AKA: Unorganized Hancock, appeared for three shows at the Fryeburg Fair in Fryeburg, Maine on Sunday. It was lotsa fun.

It was the last day of a week of fairderol. It was sunny and seventy all week, but of course when Sunday rolled around, the temperature went down to 55 and the sky turned the color of aluminum. But the show must go on. The weather gods took pity on us somewhat, and it didn't rain until after they were done and packed up. You have to take your luck where you find it.

I was a bit stunned by the size of the thing. The fairgrounds are huge. About 300,000 people attend the fair on any given year, but in my innocence, I figured it was all encompassed by a couple of booths and a gazebo and a couple of porta-johns. 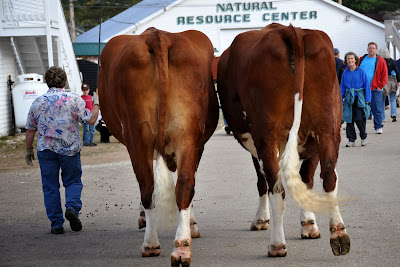 Goes to show what I know. There were real bathrooms, and they had attendants. The animals are displayed in barns that didn't look like they were built by the low bidder -- and there were lots of them. The barns were pretty big. The animals were... bigger than pretty big.

If you spend much of your mealtime sitting at a table by a window and talking to a waitress, it's easy to forget that everything comes from farms way out there in the landscape, and the farmers raise animals, and like all humans, they enjoy being competitive and collegial at the same time. The animals were astonishingly well-kept and varied, and it was fun to go gape at them. 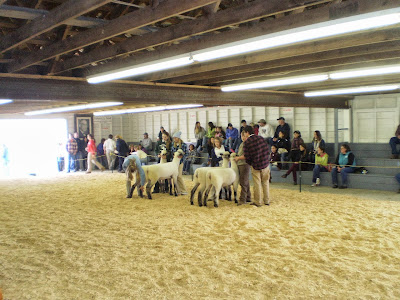 The boys played at a bandstand at Draft Horse Park, and the barns behind them had massive pulling horses displayed in rank after rank, and I noticed that all the horses been to the hairdresser recently. I took The Spare Heir in to have a look at them during one of his breaks, but he took umbrage that the horses were in their stalls head-first, and he wasn't going to look at horsie heinie willingly.

The Spare Heir is only ten. He spent the forty-five minutes or so it takes for me and The Heir to unload the truck and set up the equipment playing leapfrog, rolling around in the pine needles, with his new "Best Friend," who came all the way from Los Angeles to see them play. I'm sure there were a few spit-takes from the audience members when he got up, dusted himself off, went into our van, changed his clothes, and marched back and sat down at the drums. The Heir had a very pretty best friend in the front row as well.  I didn't want to be left out, so I brought my own. 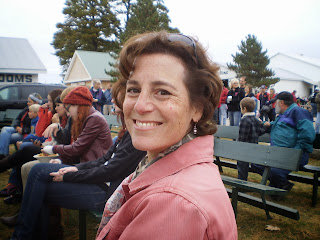 Halfway through the show, the little one made the entire audience stand up. He's uncanny that one. He tells people to do things, and they do them. He then told everyone that wasn't his mother to sit down. Then he told them how much he loved her. I've heard that mothers like that sort of thing, but I really can't imagine why.

They did three shows, forty-five minutes each. That's a man's job, and I was proud of them. They made very few errors, and had a nice crowd throughout the whole thing. I got a bit of amusement by hanging at the back of the semicircle of seats, where two broad footpaths converged, and watched the faces of the people passing by and stopping to gape when they hove into view and saw two little kids making all that noise. It's the same sort of look you see when people have just gotten an offer from a salesman that's too good to be true. Must be some sort of catch. I'm told fathers like that sort of thing, but I really can't imagine why.

Many thanks to all my readers who've supported my boys' efforts with your praise and encouragement and your donations for their efforts. They're playing through speakers you bought them. My wife and I love you all.

[Update: Many thanks to the Thud family for their generous support of our boys' efforts!]
Posted by SippicanCottage at 8:52 AM

You know, The Fryeburg Fair is a pretty big deal here in Maine. People travel long distances to go to this fair, and I don't expect they grab just any Tom Dick or Harry to play there. Your boys are really something special - raw talent combined with the dedication and work ethic it takes to become a Professional Musician!! at their young ages. Wow, and can I please say I do love a boy who is unashamed to tell his Mama he loves her in front of a whole crowd of people! Outstanding.

You are a rich man, Sipp. It is appropriate that you, the parents, are proud of your boys. Not the kind of pride that goeth before a fall. This is earned and deserved. Good boys they are and they stand as example for lots of young'uns. They also reflect what sort of people the parents are. Thanks for the sunshine.

It continues to flabbergast me that you seem to have garnered all of the luck of the Irish into your own life, Sipp.

It's not such a surprise, I think. Sipp knows the secret, and so as Chasmatic said he's a rich man. Or rather, a Rich man.

As chas says, not a pride that goeth before a fall...for it is already Autumn! (You're the guy who said "fairderol", which is pretty danged good.) What else can I say, but sheep are a good audience, and boy , that is a LOT of bulls walking there. And now we know where they get their looks. I do believe you must be a better man that I thought.

My wife is certain to hit the tip jar when she reads this.