Steal With Your Eyes 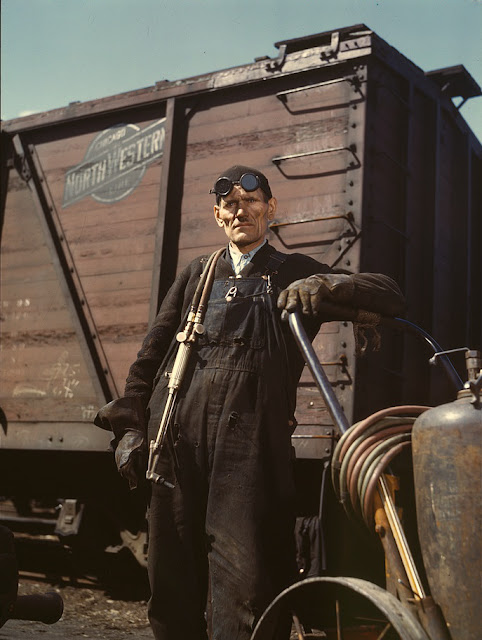 [If you just came in, I was a welder in the desert back in the day. I've been trying to explain how I got into that predicament without sounding stupid. It's not working]

You can bluff your way through most any circumstances if you'll simply pay attention. "Steal with your eyes," it was once explained to me. But paying attention to what? That's the big question. First day on the job, first date, whatever. What do you pay attention to, and to whom? Who's a sage, and who's a doofus? I swear this is the only kind of wisdom you can pick up in this world. You tune out one thing after another, one philosophy followed by another, stop reading bad books, stop wasting your time caring what flavor of imbecilic pop songs comes out of someone else's radio. To live in this world is to be an editor, not a writer.

In these situations, it's my experience -- hard-won -- that the first person from any insular group that tries to strike up a friendship with you, the new guy, is invariably either a ne'er-do-well or an incompetent. Usually both. Everyone else in the building already knows of, and is tired of, his schtick, so he tries it on the new guy. You can generally learn how to get fired, immediately, from this person.

But I was young then, and didn't have this sort of information in my head yet. I was a lamb for any stray coyote to get ahold of. I'd be friendly with anyone that would be friendly back. This place presented a problem. No one was friendly. No one even looked at me, except to glare, and precious little of even that. I immediately got the impression I was a seal on an ice floe with a dozen polar bears, and the bears did nothing but whisper to each other, then look over their shoulder at me from time to time. I didn't get the impression they were planning a surprise party for me. My attitude toward them didn't matter, so I relied on my grade school education to see me through. Who was the nun in the room? They'll have to talk to me. Larry, the happy Hawaiian with the fantastic aureole of frizz around his head, was the nun. He was in charge. He'd have to help me, surely.

But it was me, of course, that was truly flummoxed, not Larry. Larry wasn't going to be fired if I couldn't weld. Larry would smile and wave to me in the same way if I was run out of the town on a rail, or picked up by limousine to go get my Nobel Prize. I was in a strange place among strange men, doing a strange thing. They all belonged there. I didn't. But I had to. My back was against the wall and the cigarette was almost out.

There was a work room separate from the big shop area. Everybody got a metal desk that looked like reform school, where you could solder things, or eat your lunch, or solder your lunch, or eat solder, or do any number of other interesting things. Larry pointed out mine, towards the back. I sat down and looked around. To my left was a voluntarily mentally retarded young man with Professor Irwin Corey's hairdo, thick glasses with bent frames, and skin like the Sea of Tranquility. I tried watching him, first. I watched him mine his nose, and add the contents to his diet. I did not get the feeling that he was reading encyclopedias at home by the hour for amusement. My eye wandered on.

In front of me there was what appeared to me to be an immensely old man, probably four years younger than I am now, with a bucket-shaped head, a haircut that was obviously the denouement of some sort of bet he'd lost, and a moustache that had gone grey mostly on the sides, so that only the portion of his cookie-duster directly below his philtrum was black, and so rendered him the spitting image of the former chancellor of the Third Reich. He was repeating the same non-joke over and over to no one, just out into the ether. He thought it was funny to hold up a can of Glyptol, a kind of sealer paint, and pronounced it "Griptol," in a Charlie Chan accent. My eye wandered on.

Everyone else was, in the charming vernacular they all used, "Messcan." They were a tribe and a family and an army. I could see immediately that in any real sense of the word, they owned the place. And they were inscrutable to me.

[To be continued, if you feel like it]
Posted by SippicanCottage at 10:54 AM

Email ThisBlogThis!Share to TwitterShare to FacebookShare to Pinterest
Labels: 1980s, Bits of my life pulled out and flung on the Internet floor, honest work, Los Angeles

Heck yeah! I want to see how you made it out alive and if it required Ninja skills or MacGyver skills.

Me, too! I want to know if you survived or not!

Colorful and hilarious! Awaiting next chapter...

in college i got educated about that first guy by someone with too much experience (in putting up sheet rock)and too little education(hence his return to college as an ancient, to me at the time, 26 year old).

What he said he did was buy a pack of smokes (he a non-smoker) and stick them in his sleeve. by the end of the day people bumming smokes would have filled him in on all the work-place politics and given him a pretty good idea whom to avoid for the remainder of his tenure. i.e. the people bumming smokes.