Live From The Skowtown Jail, It's Unorganized Hancock 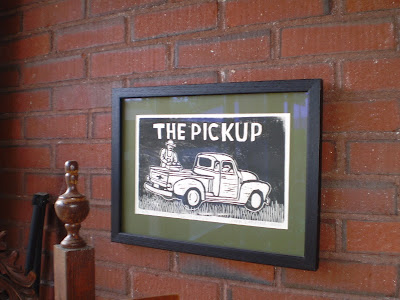 My two sons, AKA Unorganized Hancock, played two days straight in Skowhegan, Maine. You can see them show the Beatles a thing or two here, if you missed it. The next morning they were engaged to play "Jazz Brunch" at the Pickup Cafe.

The Pickup Cafe is really neat. Until a year ago or so, the building it's in was a jail. You can still see bars inside the windows on the streetside facade. It's been turned into a variegated compound of interesting businesses. There's a mill in there grinding flour, which they sell in big bags next to the coffee urns in the cafe. There's retail this and that, too. There's some sort of wholesale food business that's supposed to function on goodwill instead of cupidity. You can decide if greed is good on your own. I can testify that the coffee and the lunch we ate was really first-rate.

The cafe has three roll-up doors that allow al fresco dining during the 37-1/2 hours of good weather Maine enjoys every two years. Mainers are famously laconic, and don't like to brag about such good fortune. They're afraid you might be "from away," which is what they call everyone that was born more than two hours drive from a Mardens, and they wouldn't want to make you feel bad if you're from some benighted burg that doesn't enjoy that sort of sybaritic clime. 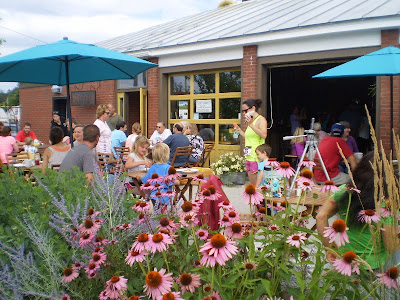 The landscaping outside the cafe was really well done. By the look of it, some of it is comestible, too. Flowers and sun with a little shade when you need it. What else could one need? Oh yes; some music.


Here's Unorganized Hancock in their natural environment. Well, except for the lack of plaster falling off the walls in their practice room, it's the same as their natural environment. The blue awning sheds a greater percentage of rainwater than the roof of my house does, of course; and the extension cord they require to electrify their amplifiers (and the audience) is shorter at the cafe than it is at the end of the hall upstairs, but other than that, it's pretty much just another day at the office for our lads. 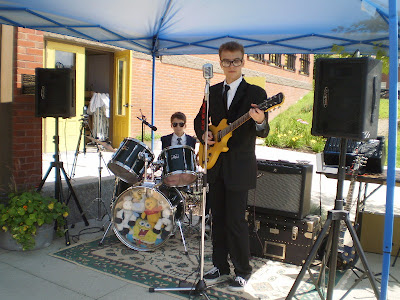 My boys play under control at all times. They can play quietly, if need be. They're using their monitor speakers as their PA speakers with this small rig. The drums are muted with stuffed toys, and the Spare Heir plays jazz songs with a kind of brushes that look like a bundle of chopsticks. The Heir is the only guitar player, so there's no volume arms race. Two guitars is four guitars, I always say. The audience loved them. They do a little show along with the music, and call up audience members to join them in some fun, and give them little prizes for doing so. People will climb over the prostrate bodies of their loved ones to get a free pair of sunglasses if you make them. My boys didn't make them.

Who wants to hear them open their show with their own jazz vamp composition called Hip Gyrations? You do? I knew you would.

There's a really pretty woman somewhere in the video. She went home with the bass player.

[Update: Dave R. has been continually generous with his donations and his support and encouragement for my boys and we're grateful for it. If you'd like to help us buy musical equipment and instruction for our boys there's a PayPal button in the right hand column. Many thanks!]
Posted by SippicanCottage at 1:02 PM

So pleased to see more of Unorganized Hancock :) They are wonderful.

"How I spent my summer vacation"... so great!

That was actually kinda amazing.
I gotta tell ya I was not overly excited about UH's foray into that hyper-intellectual hardcore jazz era but this one's really a winner.
This is a really nice composition, really well-executed.
D