The Mystic Chords Of UnoЯganized Hancock 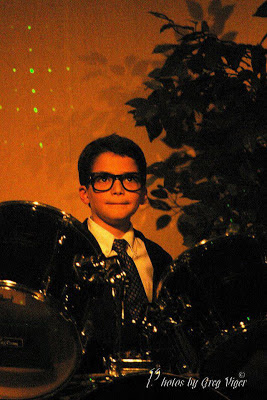 If I might mix my metaphors, Paul Bunyan Day in a town like Rumford is a two-edged sword.  There's a paper mill still chugging away in the center of town, it's true. But if Paul Bunyan showed up here in the flesh, he'd immediately be arrested by the EPA, right after he was told he had to join the steelworkers union to go near the mill, and his ox would be impounded by the local PETA chapter and then probably sent to college on a scholarship. But the town must keep on keepin' on in any case, and the logs trucks do roll by on Route 2 all day. Paul Bunyan'll do.

My boys were approached about performing for Paul Bunyan Day. The town was going to have a parade, a zipline ride across the falls, and ax throwing contests and so forth. The boys love to be part of the local fabric of life here, but I was skeptical. The promoters were a little confused, and I didn't like the sound of Unorganized Hancock playing their first job outside, perhaps partly at night, in an alley next to a barroom and the river. It's still below freezing at night around here sometimes, too. The dandelions sprouted right out of the last snowbanks. The boys are unorganized, not disorganized. Surely there must be a more appropriate venue.

There certainly was. There's a converted church in town, turned into a performance hall and function facility. They were beginning Paul Bunyan Day festivities the night before with music and contests and so forth. The Mystic Theater at 49 Franklin has one of the nicer stages I've ever seen, and I've seen many. It was perfect for the boys.

My wife was out for a walk last week, and the neighbors said, "Hey, your kids are in the paper, huh?" We're often surprised by such things, because having the paper delivered is a medieval custom to us. But there they were.


They played for about an hour, with a break in the middle. There was a biggish crowd, fifty or maybe seventy-five people. The boys played their first song, and there was a noise at the end that sounded like applause, but wasn't, really. I know that noise. It's the noise of a crowd that wants to like you, and don't even really know why. They just do, and that's that. There is no manufacturing that. 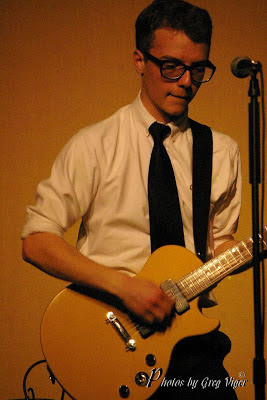 That break I mentioned was less a break than a green-stick fracture. The promoter decided to sprinkle a "Tall Tale" contest throughout the night. One fellow got up. He emitted one, thirty-minute sentence, a kind of monotone monosyllabic raga of everything that had ever happened to everyone he'd ever met. I began to search my mind about halfway through it for a metaphor for it, but my simile works weren't up to the strain and froze up and started to smoke. It had all the interest and humor of a paid mourner at a funeral of a person no one liked reading a phone book. The Beijing phone book.

So the boys went back on to face the shellshocked audience, but it took only a song to get them back into it. It was a delightfully motley assembly watching them. There was white hair next to Bieber haircuts, tattooed love boys and coquettes, Rockabilly queens and blues bar heroes all arrayed around the room. There was an uninterrupted row of pretty high school girls in the front.

The sound quality's not stellar, but the entire performance, sans paid mourners, is now up on YouTube. We have a sort-of modern Magritte drummer; instead of an apple he's got a cymbal in front of his face, and the sound's a little woolly because we were only able to get a flip camera on a tripod over to the side to record the proceedings, but it's enough for you to get the idea. They were, in their little way, in our little town, a sensation.

Many thanks go out to all my readers for all the love and support they've shown my boys. If they're any good, you can claim you were their patron. If they stink, you can always blame me.

[Update:  Kathleen M. from CT is a wonderful person and I recommend her to all my friends for all their wonderful person needs]
[Up-Update: Many thanks to Cynthia R. from Calliforn I A for her generous support of the boys' efforts]
Posted by SippicanCottage at 11:00 AM

Email ThisBlogThis!Share to TwitterShare to FacebookShare to Pinterest
Labels: Bits of my life pulled out and flung on the Internet floor, Maine Family Robinson, Unorganized Hancock

Ugh, another great band hampered by muddy amplification.
My spare heir is accumulating the pieces for his own pa system.
Maybe someday they will need each other.
DoHS

Yeah, okay, great and all that. Now can we get back to beating you for your sacrilege against Dire Straits?

The boys sound grows more distinctive and distinguished by the day. Vanderleun is a barbarian.

FWIW, I put a link up to UH's YouTube page.

So, are the going to play "Sultans of Swing" or not? Or, maybe. "Your Latest Trick"??

I like the teddy bear in the bass drum. Nice touch.

That there Spare is a handsome boy. And now he can be Spare "Cymbal Head" Sippican. What a great name!

Now, tell us the truth, Mr. Sippi. You PAID the scriveners to write that about the boys.

Not to talk to strangers! Spare's got a career in advertising ahead of him.

There is nothing quite as good as watching your own kids kill it on stage. Bravo.

How come the video stopped vidding around the 10-min. mark, and the audio continued?

Spare sure learned his one line really, really well!

Hi Dadof- The sound in the hall wasn't bad. The ambient mike in the camera couldn't reproduce it well.

Gerard! - I thought everyone settled this in the comments yesterday: While Crimson and Clover is not the greatest song ever recorded, it is indeed fourteen times more interesting and entertaining than Sultans of Swing.

Hi Leelu- You're a peach. No, they're not going to do "Stonehenge."

Hi Julie- His bass drum is entirely packed with stuffed animals. He still sounds like three John Bonhmans anyway. I have no idea how he manages it with his little stick limbs.

Hi Sam L.- The print version of the paper was even more amusing. There was a page with the listings of hundreds of acts on it. Above the fold, in the center was my boys' hastily made promo picture, lifted from the venue's Facebook page. Only picture on the page. Asleep at the Wheel never knew what hit them.

Hi Leslie- Many thanks! They done good.

The sound's a little woolly and the camera is in a bad spot, but the video is useful. Watch our ten-year-old drummer. He plays 45 minutes in front of a full house and never falters or makes an error that I caught. He drops his sticks a couple times and never misses a beat, just picks up another one and keeps going. I've never seen anything like it.

",,,, fourteen times more interesting and entertaining than Sultans of Swing."

I can see that the beatings from the barbarian will have to continue.

"There was an uninterrupted row of pretty high school girls in the front." No kidding.

Deborah has brought up a crucial point: who is raising daughters worthy of such sons???
Congrats 100fold on this debut. You were a million times less self-conscious than I was worried you might be. A triumph.
Protip: girls like Sugar Ray
D