Exactly The Same Kind Of Different 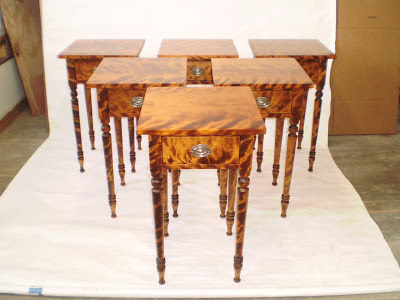 Haven't written much lately. Mi dispiace. I've been working day and night for weeks on end.

There's a picture of a batch of Evangeline Tables that went out this week. Some had gone out earlier, and some customers have asked me to hold others until later dates for one reason or another. It was fun to see a half-dozen of them lined up at a time. Thanks to everyone that bought one. I hope you like them. It was gratifying making them. I'd make more, but I used all the flame birch material I had. Not sure when I'll be able to get more like that. I admit that I was a little befuddled that I was able to make tables that look like those. I didn't think I was capable of such a thing.

They do not look like a machine made them. You can tell that they are made by a person. That's a double-edged sword. Some people might think that objects that look like a person made them would be a kind of defect. Our machine age brooks no competition from the apes. But no one that reads my blog thinks that the evidence of the hand of the person that made a thing detracts from the item itself -- just the opposite,  I imagine. It's interesting to make 32 turned legs at a time, and try to make them all the same. Exactly the same kind of different, is more like it.

This winter has been beastly. Really cold weather started really early in the year, and never let up. Snowed a lot, too. My wife and son and I had to shovel for two days straight last week, after a blizzard, just to get a truck in and accept the cardboard I use to package furniture. Everything is uphill both ways this time of year.

I'm also making a big table for Julie and her family, who reads and comments here. It's taking too long to finish it. It's been too cold in my shop to finish a table that big properly. The small ones you just bring by the woodstove and there's no problem, or bring them upstairs into the house. There is an old saying about commerce: I am your friend, but my business doesn't know you. I am Julie's friend but my business hasn't known her properly. The winter's back is broken now, and the table won't be long now. I will not sleep properly until it goes, and until the one I'm making for my friend Arlan is done, too. Unfinished business keeps a man up at night.

I have all sorts of odds and ends that have collected since last fall in an alcove outside my children's bedrooms. It's a neat little spot, a dormer with a window built entirely to bring light into what would be a very dark hallway otherwise. Whenever something gets made that doesn't have a home right away, it goes there. It's the best furnished room in my house, and it isn't a room, and no one goes there. It's time to empty it out and use the proceeds to buy food, or fritter it away on other silly things like that.

Here's an experimental Console Table. It's two inches less wide than my regular size. It's 14 x 32 by 28 inches high. Honey Pot. My wife is starting to look at it funny -- the same look she gave the stray cat that's lived with us for over a decade after the look. Time to get it out of here. $399 includes free shipping: 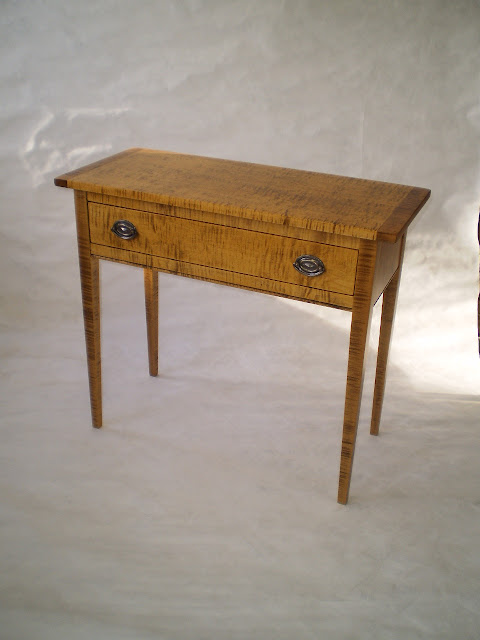 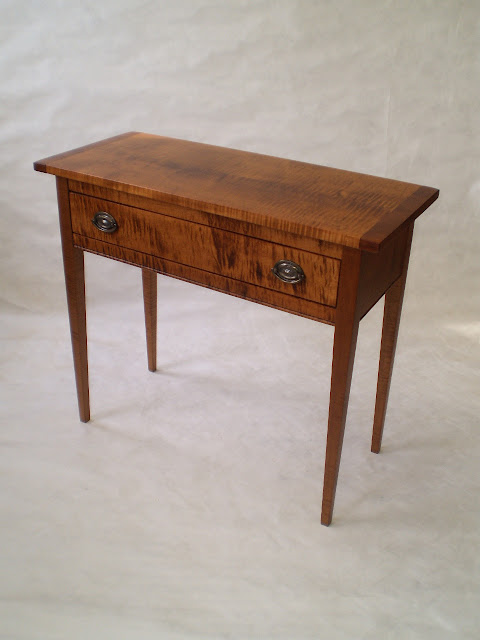 Cinnamon Cottage Console:
SOLD! to old friend Ruth Anne down Carolina way. Many thanks!
I've got two splay-legged tiger maple Kipling Tables. They're very strikingly grained. The snapshot camera I've got doesn't do them justice. They're both stained cinnamon. $199 each, includes free shipping. 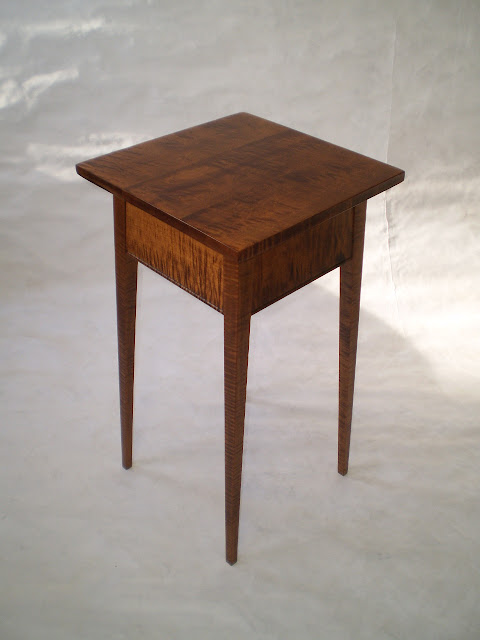 Kipling Table 1 in cinnamon stain:
SOLD! Off to the the Pacific Northwest 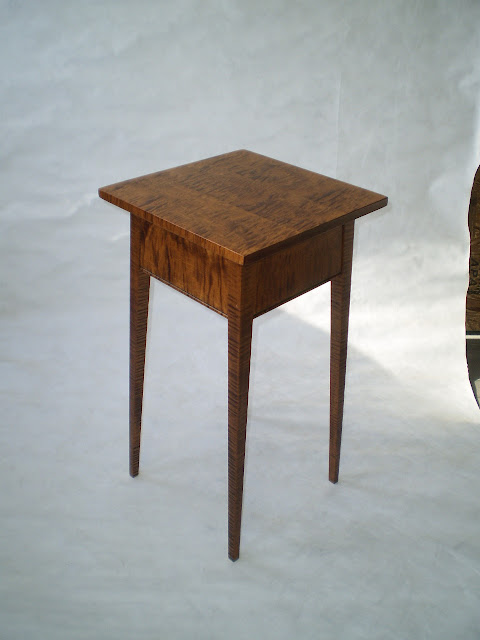 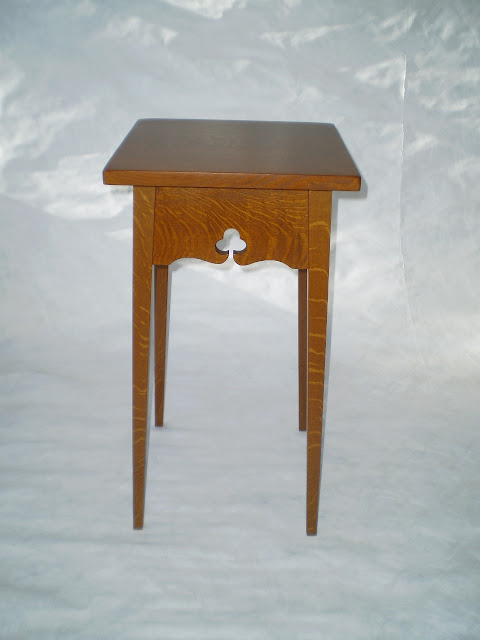 SOLD! Thanks, Julie in Florida

I used to make an item called an owl house. They featured it in Cottages and Bunglaows magazine, IIRC. I made three simplified versions of the old design. No steeple. It's entirely made of clear pine, with a cedar roof. It's painted with exterior paint. The interior is left raw, like birds like it, and there's a "ladder" that goes from the floor to the hole for fledglings to climb to get out to learn to fly. You can pull two pins on the sides and the bottom swings open to clean out a nest. It's really rather large: 14x11x21 inches high, with a 3 inch hole. The box and hole is sized for small owls and larger birds. In Maine, we have saw-whet owls, which are dreadfully cute. $99 each, includes free shipping. 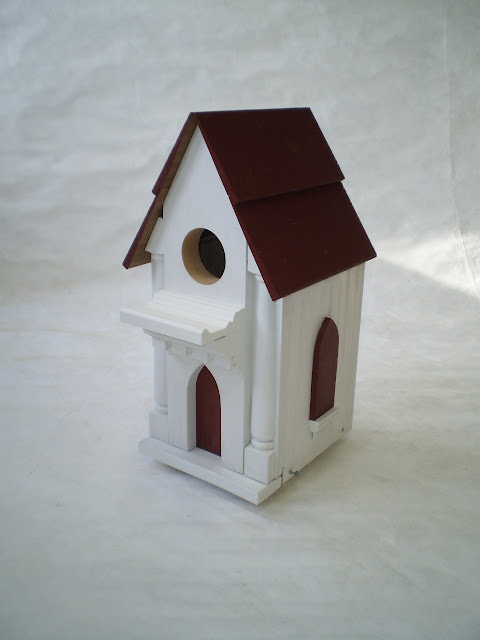 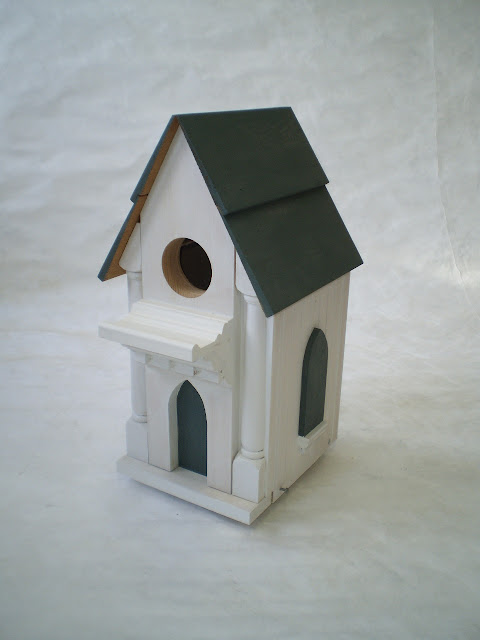 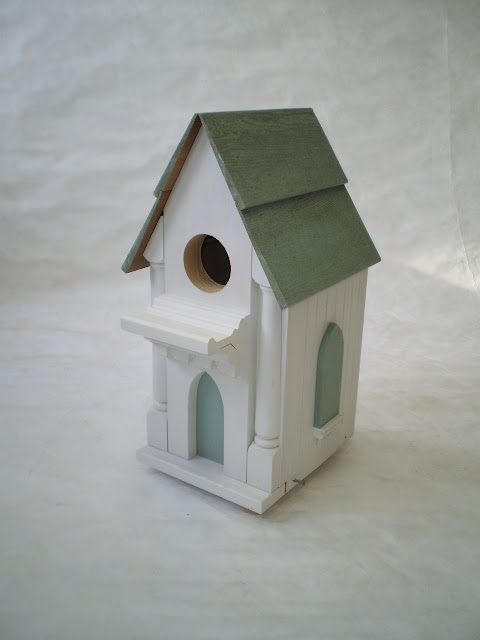 Owl House in Verdigris:
SOLD! to Kevin in Philly. Many thanks.
I have really nice neighbors here in Maine. I gave some birdhouses last year to some ladies that live downa street. They know all about birds, and they got bluebirds to nest in the houses. Marvelous. Bluebirds are hard to attract, but they tend to stay where they like it, and attract others. You can put bluebird houses in a row, like along a fencerow, for instance, and they move in. I tried doubling down on my luck. Here's a bluebird house with three compartments. Each compartment is entirely separate from the others, and they're all exactly the size of the bluebird-approved houses I made. Birds, except martins, don't really like to live together, but the two end houses face away from one another, and the one in the middle faces forward. Bluebirds will live back-to-back with other birds. There are no perches; bluebirds like diving straight into the holes. The back roof unscrews to clean it out. The back has false windows, too. It's made from pine. The inside isn't painted. Birds hate paint inside their houses. It's 8 x 16 x 9 inches tall, with three 1-3/8 inch holes. $49 includes free shipping. 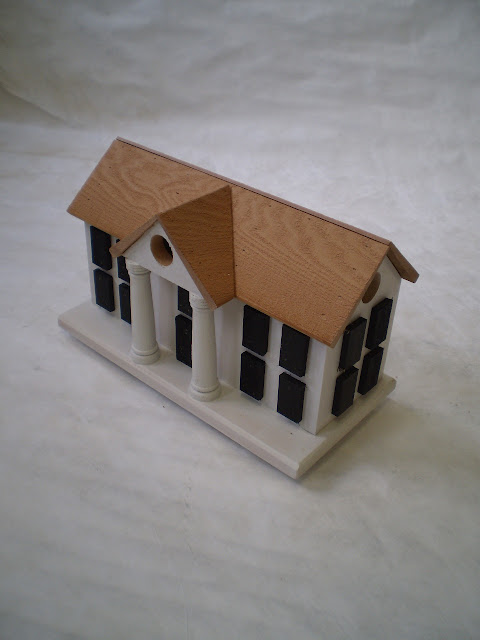 Bluebird house in white:
SOLD! Thanks, Linda in Tejas

Well, that's the lot. If you like anything, hit the buttons. If you like more than one thing, you'll have to buy each separately, because there's no "Shopping Cart" for these Buy Now buttons. If the button disappears, that means someone else beat you to it. But don't worry about my family and me if you don't see anything to your liking. Whatever doesn't sell I'll burn for firewood. Hey, a BTU's a BTU.

Posted by SippicanCottage at 7:33 PM

Email ThisBlogThis!Share to TwitterShare to FacebookShare to Pinterest
Labels: Bits of my life pulled out and flung on the Internet floor, furniture, honest work, shameless commerce, winter

Apart from the flawless woodworking, the finishes you apply are perfect. With all your spare time, wish you would teach us how you select the unpainted natural colors and achieve those satin finishes.

Your comment about machine-made vs. person-made reminded me of a comment in a SF novel I read years ago, to the effect of only poor and rich societies have hand-made things. Middle societies have mostly things of plastic, made to look hand-made.

I'm truly sorry I'm not rich (or is it poor?) enough to purchase one of your pieces before it is converted to BTUs.

Oh, and the spammers seem to be really busy today!

Unfinished business keeps a man up at night.

Hence, the wisdom of doing woodwork on boats floating about in marinas. When night falls, work stops.

A small story about hand-made, flaws and such: A friend learning to paint did a winter scene. House, trees, snow. When she gave it to me, I greatly admired the cardinal perched in a tree. After a couple of years of admiration, I mentioned it to her.

She laughed - a lot. It wasn't a cardinal at all, but a drop of red paint that had fallen on the canvas while she was working on another piece.

I still see a cardinal.

One day in the distant future I plan to bring the family to America on a permanent basis, hopefully you will be still doing your magic as I hope to be lucky enough to live with some of your work....bloody good work.

Hi Anonymous- I would like to write a book or ten about what I know. I learned it all the hard way.

Hi Leelu- That's a trenchant observation, no matter what the source.

For every spam comment that makes it, I've erased 100 more. I get them all, eventually. It's tiresome.

Hi Shoreacres- "I meant to do that" always worked for me. Remember, as George Costanza said, "It's not a lie -- if your believe it."

Thanks for your purchases. It's how I feed my children.

Thud- Many thanks. I feel as though we are brothers that never met.

Sixty Grit- Another brother fum another mutha! Many thanks for your kind words. The owl houses are fun to make.

All beautiful works of art...

I now own one of the Evangeline tables. I just stop and gaze at it once in a while, it's just so darn pretty it makes me smile to know that it's mine....and man alive, that baby was really packed well for shipping. The FedEx driver could have just catapulted it onto the porch and it wouldn't have hurt it a bit.

"Old" friend would much prefer "long-time" friend. There's a reason I buy my Mary Kay wholesale ya know.

Hi Roberta- The FedEx driver could have just catapulted it onto the porch and it wouldn't have hurt it a bit. I believe this approach has been tried a time or two, so we prepare for it. Very glad to hear you're enjoying your table. Thanks again!

Hi Ruth Anne- Duly noted. Many thanks for your long... erm... continuing patronage.

You make excellent woodwork, sir. I take my hat off to you and your skill and knowledge.
The most beautiful wood work I have seen in a long while. Thank you for sharing your talent and your knowledge with us.
Heltau