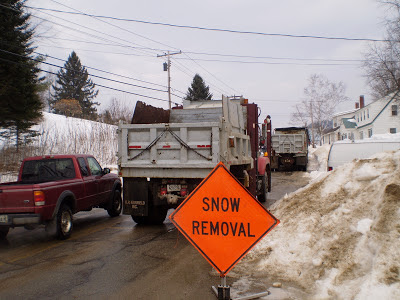 Some sort of stuff has been falling from the sky for four days straight now.

What it is, I cannot say. It accumulates on the ground is about all I can report about it. It changes itself from one thing to another from time to time, to avoid monotony. I am having a great deal of difficulty attempting to identify this substance. It has a passing resemblance to "partly cloudy," which of course in New England is measured in inches, generally, but there the similarity ends. I'm used to shoveling six inches of "partly cloudy." This was something else.

At first, I was gulled into thinking it was snow. It was white, and sort of fluffy, and tasted like nothing, and you could push it around with a plastic blade mounted on a wooden dowel. But that was a canard and a swindle. You went out into it, and whoever has his hands on the levers of the machine that makes it dumped all this other stuff on you. Bad stuff. The snow-like stuff was just to get you onto the lot, as the car salesmen say.

The first day was no picnic, but we piled the mysterious admixture up here and there around the place where we thought we'd like to have another look at it in May. The second day brought even stranger material to earth. I tried applying the encyclopedia, and the dictionary, and word of mouth, and the wreckage of my education to the problem of its composition. The town assayist turned down the contract flat. Said he didn't want to spoil his thimble with the gunk. I had to rely on my good sense. So, here goes: I think it was equal parts Visine, petroleum jelly, heavy water, asbestos, and earwax, with just a hint of Zima in it.

The third and fourth days were just variations on the theme, worthy of a Mozart or any of those German fellows banging on their pianos while portly women with viking helmets hit the big notes. My senses are somewhat dulled from constant exposure to the elements, and I am weary from my exertions, so forgive me -- of course it was redundant to mention earwax and Zima in the same sentence. Mi dispiace.
Posted by SippicanCottage at 2:00 PM

I guess that the ear wax is emulsified in the Zima, then the mix frozen and sprayed out over the landscape?

I just returned from Idaho, where my youngest saw her first snow fall, first sled run, first snow man and snow ball fight. We just got off the plane and it was 68 degrees. Yes, I love me some Arizona winter. You can have that whateverconcoctionthatis out there.

Arizona. Spent time in Tucson. Got 6" of snow one night.