Almost Forgot To Write About Furniture 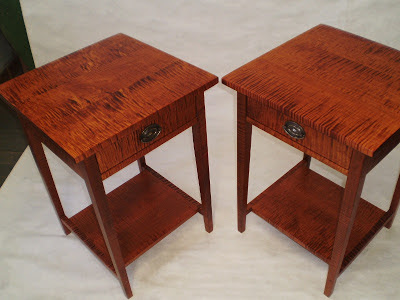 True to the quote on the masthead, we're all over the map here at Sippican Cottage. But every once in a while I suffer a blow to the head, or some other pleasant diversion, and it reminds me to talk about what I'm doing all day when I should be answering my email. I make furniture.

I've made a lot of furniture over the last eight years. Hundreds and hundreds of pieces. The business is like a bicycle, and you keep pedaling while looking at your feet, and lose track of the landscape a little. I should know, but I don't know how many states I've sent the stuff to at this point. There's a little hole in the middle of the country that are strangers to me, still. I've never seen a Yeti, or a customer from North or South Dakota. They must live indoors there now; don't they need furniture? I don't know. I wish them well all the same, and lurk in the Intertunnel's bushes, waiting to pounce on them if they pass by.

I've made some furniture that's ended up in England and Canada, too, but I don't sell furniture there. People bought it here in the states and took it with them and told me about it. Really nice people in Canada (are there another kind of people in Canada?) have offered to buy things from me fairly often if I could figure out all the paperwork. I couldn't, so I haven't. I know you can't tell by reading what I write, but I'm not a dullard. It just requires more time than I have to figure it out properly, and is fraught with peril for a very small business like mine. One has to be conservative in your behavior to stay alive in the world of commerce these days. Many things are worth doing but there is no time. Maybe later.

I am ashamed to admit that I don't even have pictures of all the stuff I make. I've put a lot of stuff into boxes with the muttered oath: I wish I'd taken a picture of that. If the camera battery is dead or the FedEx man's arrival  is nigh or it's pitch dark or something, it goes out, and many times, out of my memory.

But lovely reader and commenter Leslie purchased a pair of tables last month -- or was it the month before; what day is it? -- and I managed to take a picture of them before they went the way of all lignin and cellulose and corrugated cardboard. I thought they were awful pretty. I made them for her special in all tiger maple with Pumpkin stain. Tiger maple is endlessly interesting stuff. No two pieces of it are quite the same, and so, they're endlessly interesting to look at and challenging to work with. Leslie even found time to send me a snapshot of the little four-legged buggers in her home way out west where they don't shovel. Lovely! 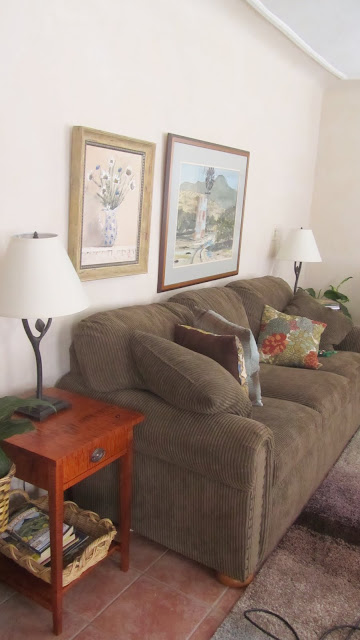 My business is sometimes anonymous, but less so than it used to be because I socialize with many customers here on my Intertunnel Logos Stand. It's always piquant to see the things I make in their natural habitat, because a workshop is not the natural habitat of such things. Your house is.

I'm grateful to everyone that reads, and those that leave comments, and link here, and purchase things from Amazon through my portal which throws me a few bucks which we sorely need and appreciate, and everyone that's kind to my children, and everyone that buys the furniture. I love you all more than my folks.


Mount Lebanon tables at Sippican Cottage Furniture
Posted by SippicanCottage at 11:04 AM

Email ThisBlogThis!Share to TwitterShare to FacebookShare to Pinterest
Labels: Bits of my life pulled out and flung on the Internet floor, furniture, honest work, shameless commerce

Since you mentioned the Amazon portal thing, I wanted to ask if there's anything special we need to know to make sure it is working right.

I order a pretty fair amount of stuff off Amazon from time to time, and what I've been doing is using a link from one of your old posts to start my browser session at Amazon, then I start searching for items I want, adding them to my cart, and checking out, from that same session. Does Amazon keep the initial link from your site in a cookie or something? Or maybe some special number in the URL of the session?

I don't mean to over complicate things, but I was hoping to make sure that what I'm trying to do is actually having the intended effect. Thanks!

I find it easy just to open Sip Cottage, type what I plan to buy into the search box (e.g. underwear), and go on from there. Like Hammer, I've always wondered if Sip is getting his take.

Thanks for reading, and for supporting this site.

Any Amazon link anywhere on the page produces the same effect as the dedicated Amazon search box. Once you enter Amazon through any of my links, most anything you buy during that session is credited to my link. So feel free to buy a battleship at Amazon even though you originally went there just to buy wool socks.

To safeguard the privacy of Amazon's customers, Amazon doesn't tell me who buys what through my links. I do see what items have been purchased, but that's it. I get an especial thrill when people buy a copy of my book through my link, because I earn a small commission on it as well as my royalty for the book itself. It's pennies, but it's fun.

I'm very grateful to everyone that helps support the website by using the Amazon links and so forth. It means the world to us. Thanks!

I think your furniture is splendid, and I look forward to the day when I can fill my house with it. I want one of everything! Or two, mebbe.

If you decide to add to your repertoire, I hope you will consider stools for adults. They are my weakness, and I have five (three of them stack). I drag them all over my house, and use them every day.

i had to open that pic full size to make sure you didn't take the brick and keys to the edges. reeeeel nice.

i had to open that pic full size to make sure you didn't take the brick and keys to the edges. reeeeel nice.

I bought a couple of tables a few years ago from you that are now in Sweden.

Wow, Anon,
"I find it easy just to open Sip Cottage, type what I plan to buy into the search box (e.g. underwear"

I consider myself a man of some testicular fortitude but have not yet pondered having my underwear carved.

My home is exponentially more lovely because of those tables. I will always treasure them.

Hi Deborah- Many thanks. Thanks for putting an Internote in my suggestion box. I get my best ideas from my customers.

Hi Leon- Many thanks. Most of the furniture I make entirely from figured hardwood doesn't get distressed. It's dyed to make it look like age has darkened the grain, though.

Bilejones! That's marvelous. I had no idea. Many thanks for reading and commenting and for your purchases.

Hi Leslie- They look great in that room. Many thanks for your support.

Your Amazon link doesn't work in Firefox, so I've started with your book at Amazon. Don't know if that works for you getting some pennies, or not.

Hi Sam- Yes, the book link in the right column will act as an Amazon link for my blog like any other Amazon link, and I receive a small commission for whatever you buy during that session for Amazon, even if you don't purchase the book.

I love my four pieces of Sippican's craftsmanship. The Owl House looks to be a collector's item since he no longer makes those whimsical beauties.

Mine is still living in the kitchen, completely owless but very much admired. I stash my earrings on the ledge when I walk in the door.

Those tiger wood tables are drop dead gorgeous. You did my tops in tiger wood and the base in black - a timeless look, but not as stunning as Leslie's.

I dropped the ball on the custom desk project, but I haven't forgotten nor have I bought a less satisfactory version. It's still on my wish list, Greg.

By the way, your boys are simply wonderful!

Daphne! Long time no see. Lovely to see you hanging around the Cottage.

Two years after moving to our new place, I'm still adding back items to the catalog as I expand the shop in its new home. I'll offer owl houses again, but they'll be a little plainer than yours. Hope the owls won't mind.

Thanks for your support and friendship!

Leslie said...
This comment has been removed by the author.
9:21 PM

No, Mr. Sippi, not your Amazon link at this here place--it don't work for me. I mean your book on the Amazon website. Though I see your book picture here now takes me to Amazon. It's that box that sez "Support this site. Use this box to buy anything..." I don' know nuthin bout no other Amazon links on the page, neither.

Mebbe, to make sure, I'll come here first and go there.

Hi Sam- The Devil's in the Cows link here on my page does indeed act as an Amazon portal and any purchases made at Amazon after using that link gives me a small commission at no cost to the purchaser. Thanks a ton for supporting this site!