Anybody Know How To Get Disemboweled Economy Stains Out Of Your Smock? 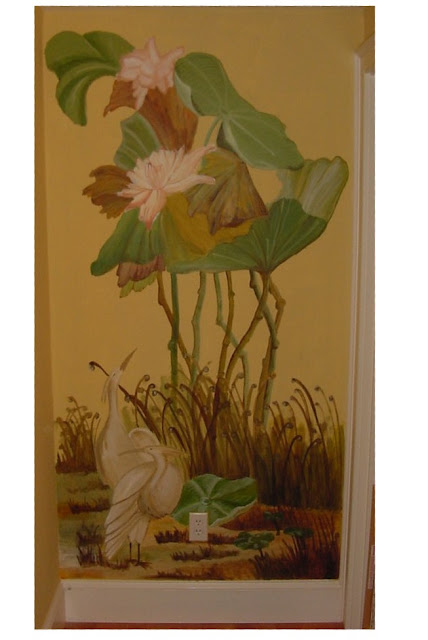 More daubing at the walls here from a almost a decade ago. It's a sort-of proof of concept for an entirely painted foyer, and a business plan. The background color was a vaguely ocher color, and the motif was to be based on a series of Chinese tapestries: 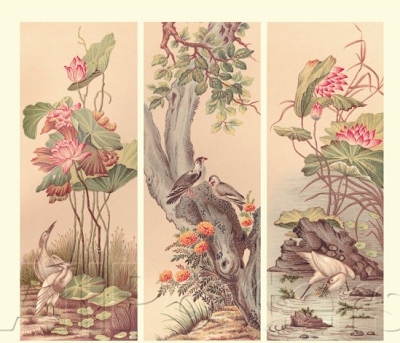 It took much longer to prepare and paint the walls than to do the mural. I was very loose with this one. I put the paint (acrylic) on the wall fast and very roughly. It's no great shakes, but it looked painterly, anyway. The foyer was "close" and vertical, and putting a heavy band of color low would have spread it out visually pretty well. I'd done lots of faux bois and faux marble, and other textural stuff before. Some trompe l'oeil, but mostly architectural things, not things from nature.

I wasn't in the furniture business yet when I did these. I wrote eight, two-page rough draft business plans when I stopped working in the commercial construction management field. Decorative painting was one of them, along with furniture. Several of them involved moving to Maine in search of ramshackle houses. I was surprised to read them after almost a decade. They're prescient and insane in equal measure, like all good business plans are.

I did notice that none of the business plans had an entry for the entire world losing its collective mind and the economy disemboweling itself and throwing its entrails at me after a few years in business. A fever of 105 on and off for several months was also overlooked. Other than that, they all would have worked, I imagine.

Painting on the walls is not art, really. It's like architecture, which isn't really one thing. Architecture is a melding of structural, aesthetic, and psychological concerns.

The book I got this out of is entirely useful for finding themes for decorative art: Racinet's Full-Color Picture Sourcebook of Historic Ornament: All 120 Plates from "L'Ornement Polychrome," Series II

Posted by SippicanCottage at 12:45 PM

There is no end to your talents. I have a daughter like that.

Can you do requests? I think the unpainted parts of the house should replicate Goya's own passage at painting the walls of his house -- The Black Paintings:

Using oil paints and working directly on the walls of his dining and sitting rooms, Goya created intense, haunting works with dark themes. The paintings were not commissioned and were not meant to leave his home; it is likely that the artist never intended the works for public exhibition: "...these paintings are as close to being hermetically private as any that have ever been produced in the history of Western art.

I love the Chinese mural, but now I really want to see those business plans.

Painting can be structural - all you have to do is use load bearing paint.

I've seen plenty of houses that are held up by paint.

Good observation about the melding. I do think the site dictates the choice of complimentary subject matter of a mural. Being a died in the wool Texan, I feel right at home in a Tex/Mex space.
This is my dream dining room which I photographed while visiting and going on home tours in San Miguel de Allende a few years back.

You done those good.

Could you do a repro of whoever's painting of Dante's 9 circles of Hell? That would look good somewhere. Maybe the guest room...

"Painting on the walls is not art, really. It's like architecture, which isn't really one thing. Architecture is a melding of structural, aesthetic, and psychological concerns. "

What do you think of painting on ceilings, perhaps in Italian chapels. More like art?

I don't know what art is, but I know it when I see it. You work is art.

Hi all- Man thanks for reviewing my work kindly before sobering up and looking for your glasses.

Sixty Grit- "Putty and paint make the carpenter what he ain't."

Hi Bob- If I'm in a self-abasing mood, I'll post them.

Hi Leelu- I painted the foyer ceiling in the house with the fancy-pants powder room. I'll post pictures of that if you like.

I've only been to Europe once. Florence. There's a church Ognisanti, that had the best trompe architecture painting melded with big fresco portraits I've ever seen.

I think painting things on the wall is much different than hanging paintings on the wall. I don't think anything I painted was "art." It was some other hybrid thing.