As The Jaded Pornographer Used To Say, I'm Running Out Of Places To Put It 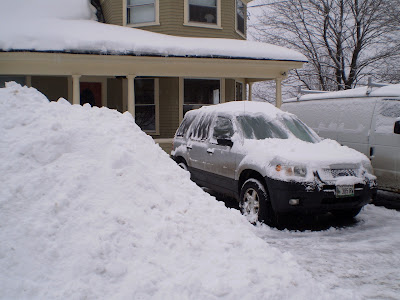 What an appetite for denying objective reality the media has. I'm forced to read the local papers now, something I haven't done in many years. They have run story after story about the "snowless winter." As I understand it, it's been entirely caused by my stubborn refusal to remove the three 100 watt incandescent bulbs I have in the basement. The waste heat from those babies got the temperature down there almost warm enough to get the CFL in the fourth socket to emit a little light. I apologize unreservedly.

Of course the part of the snowless winter that stubbornly refuses to show up is a lack of snow. A local school has already announced the kids have to stay later in June to make up for all the missed days. Of course the story said that even though there was no snow, it sure did snow a lot.  It may not have been a very snowy winter... is the opening line of the story. I've read a hundred of these.

We trick-or-treated in eight inches of snow. But that's the fall! It doesn't count. It's snowed more or less continuously for the last week, but I guess that doesn't count for some other reason.

I've been here for three winters now. This is the most snow now on the ground there's been for all three on this date. It's average for around here. I didn't move to Maine expecting it not to snow. One grows weary of being told you're shoveling four inches of partly cloudy, though.

Don't need snow when they're always giving you something to shovel.

But there's been almost no snow in Portland. So, yes, there's been a lot of snow in Maine, but only in places too yucky for people who write about global warming to go to, so it doesn't count.

We had an inch of snow this winter - more than enough. It melted by noon and even at that I thought it overstayed its welcome.

I knew there was a reason I've never paid attention to local news. If I'm going to waste valuable time, the internet is vastly more entertaining.

We've had NO snow so far this winter!
Why, that's... wait. Florida.
Never mind.

yes, dallas has had a complete miss with the snow this year...must be all that warming. seriously i moved here from nebraska in january 93 and just kept driving till there was none of the white stuff left. love.it.

Well, as we used to say at Minot, ND, I'm gonna tie a snow shovel to the roof of my car and drive south until somebody asks me what that is.

Sipp, take a look at this video and tell me "what on earth" is going on. The shapes of these weather patterns are entirely surreal, unnatural and manipulated. Here's an analogy of what just occurred in the South in the past couple of days.
http://www.activistpost.com/2012/03/tornado-spree-foretold-haarpamisr.html

I hate to whine, but we are seeing mosquitos. In Lancaster, PA. Sigh. I hope we get some of your lack, real soon.

Snow? What is this "snow" you speak of? Some type of atmospheric phenomenon? A weird form of Maine Speak that nobody understands? I seek knowledge, so I must Google snow.

Well, Google informs me that "snow" is a form of rain - a hard form of water that accumulates on the ground often times requiring the moving of same from driveways, roads and sidewalks to a different location often in proximity to said sidewalk, driveways and roads and often in huge piles. Which would explain the pile of "snow" next to the car.

Huh - well glad we don't have such a thing in South Carolina I'll tell you what.

I can tell you we have the same thing here in north Europe: the global warming has *again* shown up as more snow than historical averages. Which is just proof that the warming has progressed so badly, because *obviously* lost of snow is a sign of climate change.

Besides, weather is not climate. Except when it is warm.

Thank you for taking one for the team. Last winter, we had over 100 inches, I think. We couldn't open our front door after the February blizzard and it took my husband and me four hours to clear the driveway and the sidewalk, usually a 20-minute job for one person.