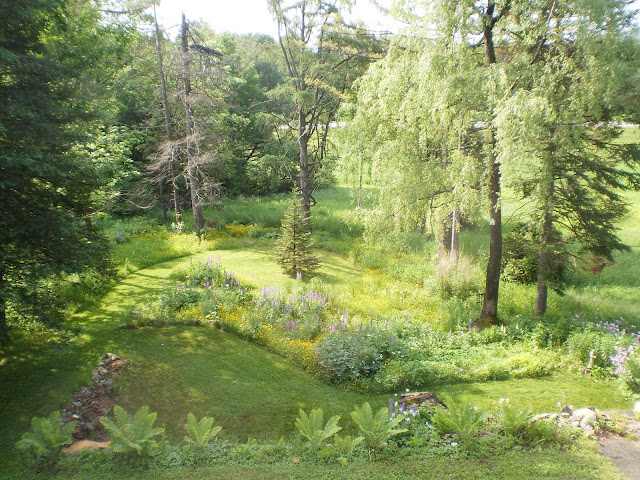 This is the view from our kitchen window.

We didn't do much of anything, except editing. There was all sorts of trash out there, including a big pile of the former roof. Someone had unwisely tried to grow stuff to eat next to the parking area, and also used it as a dump. We flattened that.

We're two climate zones away from knowing what grows. Everything that came out of the ground was a surprise. The lupens are just hitting their stride. There's a big white lilac bush past its flowering on the left. There's a big clump of bleeding heart. There are big ferns everywhere. Huge thistle plants take over if you don't keep after them. Lots of buttercups, daylilies, queen anne lace, and wild violets. Some sedum. There will be black-eyed susans later. There's a rambling rose bush over behind St. Francis. There is some sort of tall free-seeding phlox-looking plants everywhere around here that fill in the interstices with blue and white flowers. There's a bunch of other stuff I have no idea of.

Maine has trees, boy howdy. We've got tilia (linden, or basswood), blue spruce, a willow, birch, fir, pine, and magnificent Norway maples in our yard. The Norway maples are blood red, dark green, and light orange at the same time, which is impossible.

There's a dead spruce that an enormous pileated woodpecker is disassembling. He's as big as a toddler and as dumb as a blog writer, with much the same method -- constantly bashing his head on spots that appear rotten looking for juicy grubs, destroying the whole thing in the process.
Posted by SippicanCottage at 12:57 PM

I've been missing your blog. I lost it. Now I've found it again.

I know. I know. Hard to lose a blog, but I did -- I kept calling it Furniture.

"...as dumb as a blog writer ..." love it! And I love your view. Isn't it nice to be working in the kitchen and be able to look out at nature's beauty?

I've promoted the last to blogging quote of the decade (so far).

"Woodpecker" sounds like an animal named by Groucho Marx, AKA Professor Wagstaff.

Hi Harriet- I keep calling it furniture, too.

Hi Bonnie- Our kitchen is a horror. But it has two enormous windows looking out into our little garden, and in the winter you can see the river. There's room for a big table and four chairs. In the morning, it's entirely bathed in sunlight. Every morning our smaller son sits by the window and says: We must have waffles! We must think, and have waffles!

I can fix all the things wrong with it if we get a little money. But one cannot buy what is right with it.

Vanderleun has been in my kitchen, which improved it immensely, if temporarily.

Hi GBob- My wife and I dearly loved the pictures of your son wearing the tools of ignorance. Our older son has worn them, too.

Beautiful - the post, your follow-up comments, and that view: the outer sanctum.

Sheesh! From the way you've described the place in the winter, I had in my minds eye a vision of standing at the north pole and turning a 360.
It's durn purty!

That is really lovely! I really like how you went with the curving forms of the natural landscape.
We love lupines, even their foliage is nice.

Scope for imagination, that view! I can abide most any benighted dwelling if there be some redeeming vista beyond its walls.