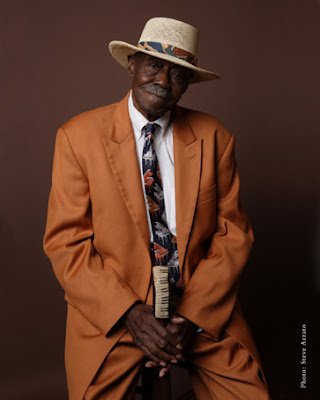 [Blues piano player Pinetop Perkins passed away on Monday. He was 97 years old. He was an interesting and pleasant man. I once played in a band with him way back when, when he was really young -- you know, in his mid seventies. He was still playing right up to the day he died, and is the oldest person ever to win a Grammy. I wrote a little something back in 2007 about him, and it had a good performance by him playing the piano with Muddy Waters back in 1976, when he was at the top of his game:]
I used to be a musician.

I still play occasionally, but only if you really make me. I never paid much attention to learning to play properly. My older brother is a very fine musician and taught me how to play the electric bass in the late 1970s. I bought an axe and amp, had a lesson, and got a job working in The Met Cafe in Providence a week or so later.

Playing the bass is like owning the baseball. You'll play all you want to if you can manage to show up and mind your business. I did.

The music business was filled with guys like me. They worked with their hands all day in construction, and played music at night. But I was the exact opposite of them, too. I played music for money and built things for the love of it.

I've had a few book's worth of odd and interesting things happen to me while I was playing. I could never remember all the places I've played in, and I can't even remember all the bands I've been in. For a while, I'd play with a different set of people four or five nights a week. I don't miss it all that much, really.

I got to wondering how many people I could recall that I played with that would turn up on YouTube. I was tickled to find two in one video. Pinetop Perkins and Luther Guitar Junior Johnson. They're both playing with the magnificent Muddy Waters:

Pinetop seemed ancient to me back then, twenty years ago and more, and he's still alive today and performing at 94 years old. We played in the Civic View Inn in Providence. The dressing room for the bands was upstairs, and it was... how do I put this delicately... um, well, they had shag carpeting on all the walls and the floor and ceiling too. There was a TV bolted to the wall up in the corner; the movies they were playing on there continuously would make an animal husbandry specialist blush. I avoided the doorknob, and there was no power on earth that could compel me to enter the bathroom under any circumstances. Pinetop was bored, so we went down to the bar. I thought it was funny that Pinetop called Johnny Walker Red, his favorite, "high test," just like my uncle does. I bought him a great deal of it. He was almost fifty years older than me, but we had more in common than I had with people I considered my friends. He wore a huge cowboy hat, was skinny as a rail, told a million stories. We had a blast. Some guys in his band didn't show, so we opened for him and played with him too. All he needed was a piano, really.

I can't remember where the Luther Johnson gig was. That's him playing the guitar over in the right hand side of the frame. He was one of those guys -- lively, talented, good enough to make a living at it, never making a lot of money. I remember giving him a ride back to his house. He lived in a tidy little suburb south of Boston somewhere, and was anxious to get back home to his family. Now that's my kind of guy. I always am too.
Posted by SippicanCottage at 10:01 PM

Email ThisBlogThis!Share to TwitterShare to FacebookShare to Pinterest
Labels: 1970s, Bits of my life pulled out and flung on the Internet floor, music

I remember playing a gig with a couple of old pros; the guitar player had played with a number of big names, and the drummer was another sideman that had been around - both guys known and respected by the "name" musicians but not heard of by the public - you know the type. It was one of my first gigs with actual pros.

Reading this post, I remembered listening to the two of them talking about living the life of being a working, traveling sideman. What they described was a virtual hell of broken attachments, the dull insanity of constantly moving, and of being married not necessarily for reasons of having a family, but of simply for having a place to rest in-between gigs - a bit of predictable, stationary hell in-between much longer bouts with hell-in-motion.

"But it's all worth it for the music," they both said.

"Like hell," I thought. Whatever ideas I had about going the professional bassist route ended that weekend in Malibu. I think I'm a happier man for putting Music strictly in the "hobby" column of my life, even if it's meant that I've never had the same passion for the instrument that I used to.

I look at it this way: Music didn't lose anyone important (not by a looooooong shot) when I packed it up. Instead, I put myself in a position to continue being a musician without ever having to see the activity become, as some L. A. Opera guys I've sung with put it, "like digging a ditch."

Bonus True Story: Grace Slick was a friend of the woman we were backing and was at one of the shows. She had to be pointed out to me because when I saw her all I saw was another trendy Malibu matron. But, learning who she was, I introduced myself, and, halfway through introducing myself, remembered that, in fact, I thought she was an idiot, so after I said "hello" and she said "hello" back my tongue stopped in my mouth as my brain tried to reconcile my need to be both polite and honest. I fumbled for a compliment, but nothing coherent came out, although I may have said something like, "Didn't expect you to look so normal."

Hopefully, I didn't actually say that and the tainted salmon I had that night is messing with my memory. Don't joke with the chef unless you KNOW the chef, is another lesson I learned that weekend.

Sorry for writing the novel in your comments section, by the way.

Hi Cameron- Thanks for reading and commenting.

That's why I always check the comments. I enjoyed both stories. Thanks guys.

When I lived in New Orleans, I often did studio work (guitar/banjo/keyboards) part time as needed - got a chance to play with Fats Domino and Al Hurt a couple of times at their clubs on Bourbon and St. Chartres streets.

Unfortunate that all the great early blues men are slowly disappearing into the Great Beyond.