An Aged Man Is But A Paltry Thing, A Tattered Coat Upon A Stick, Unless... 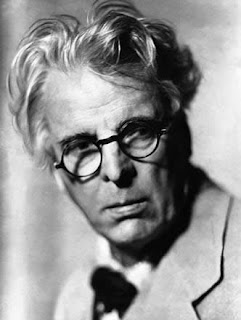 My friend Bird Dog is waxing about poetry.

He is the rarest of things in this world to me. He rouses my mind from its torpor. I do not know what the possibilities available to me might have been, based on the space between my ringing ears, and will never know, because life is short and you have to be in a hurry.We're all Popeye after a while and must act it. But it's nice to have something new to chew on. New is hard for me to come by.

I can't watch the news on television. It's like a mildly retarded car salesman, or the woman that sprays smells on you unwonted at the department store, reading a bad newspaper to you very slowly. A printed newspaper has many uses. We covet them here. The heavy paper bags you used to get at the grocery store were superior of course, because you could cover a textbook with them as well as start fires in the fireplace, but a newspaper is pretty good. Neither of them can hold a candle to corrugated for warmth, but they recycle that stuff now. But read them? They're like being forced to read a fourth-grader's homework; the child of a neighbor you don't like very much.

The Intertunnel, my beloved Intertunnel, is 99 44/100% written by people with negligible intellects telling me they can read a newspaper harder than I can. Then the apostrophe faerie comes and sprinkles their screeds with goodness everywhere.

But my Intertunnel is so large, it doesn't matter. It's given me the world, and everything in it. I only require the half percent that's not twaddle. It's too much for any man.

As I said, Bird Dog is the rarest of things, and the most valuable to me. A stranger that tells me what his life is like. He does it inferentially, mostly. A lot of words offered mean obfuscation. There was a reason Eisenhower required all major proposals to be presented to him on one foolscap page. It wasn't because he was dumb and couldn't read. He knew the authors would use any more than that to obfuscate, and dissemble, and cover their ass. So Bird Dog says read this, and offers a mordant word or two, and occasionally says: this is where I go, and this is what I do, and this is what I like, and this is what I think. Other than young ladies that disrobe and are ambivalent about the presence of a camera in the room, what is best in Intertunnel life besides that?

He reads T.S. Eliot. Did, and does. I did not, and don't, so him telling me he does means I might.

"The Love Song of J. Alfred Prufrock" is very good, of course, but it's a WASPy thing, and so, stranieri.

In the room the women come and go
Talking of Michelangelo.


I'm with the broads on this one.

A man is what he is, sometimes. I don't know if I ever had it in me to be a souper, but old men just eat what's put in front of them and don't worry so much.

But the urge for words does comes to me from some place now; from an inaccessible but visible stone that disgorges its faeries nightly. The land of the nervously fingered beads, and Cuchulain, too.

WHAT shall I do with this absurdity -
O heart, O troubled heart - this caricature,
Decrepit age that has been tied to me
As to a dog's tail?
Never had I more
Excited, passionate, fantastical
Imagination, nor an ear and eye
That more expected the impossible -
No, not in boyhood when with rod and fly,
Or the humbler worm, I climbed Ben Bulben's back
And had the livelong summer day to spend.
It seems that I must bid the Muse go pack,
Choose Plato and Plotinus for a friend
Until imagination, ear and eye,
Can be content with argument and deal
In abstract things; or be derided by
A sort of battered kettle at the heel.

Posted by SippicanCottage at 10:48 AM

I want to go to BirdDog's high school.

I don't. He even made the teacher let him sit next to my baby.

I'm not surprised that you have such a smart baby,Bob.

Perhaps. But he ought to find a chicken little of his own.

You have a way with words, Sipp. So do Maggies' boys and girls.

Thanks, Sam. If it's true, it's my father talking.

I read Gagdad Bob for different-the-same reasons as Bird Dog.

In my beginning is my end. In succession
Houses rise and fall, crumble, are extended,
Are removed, destroyed, restored, or in their place
Is an open field, or a factory, or a by-pass.
Old stone to new building, old timber to new fires,
Old fires to ashes, and ashes to the earth
Which is already flesh, fur and faeces,
Bone of man and beast, cornstalk and leaf.
Houses live and die: there is a time for building
And a time for living and for generation
And a time for the wind to break the loosened pane
And to shake the wainscot where the field-mouse trots
And to shake the tattered arras woven with a silent motto.