Reader Jason Gordon wrote to tell me about the Carpenter Poets:

On a Thursday night back in 2004 one of the men came into James's Gate Pub with some poems from a book called "Hammer" by poet and carpenter Mark Turpin. Inspired by what they read, this group of Jamaica Plain carpenters challenged themselves to each write a poem: a poem about their work, a poem about carpentry.

Thank god for the Intertunnel; if it wasn't for this intellectual periscope I have going here, I'd never know about nuthin'. That's about a 50 minute drive from here, and I'd never hear about it. At first blush, I thought I'd never seen such a thing, and wondered at it. I've written a few lines of doggerel for a lark here, but I'm no poet, though my feet are longfellows, har har. Upon reflection, I realized I'd participated in something similar my whole life.

I realized all of a sudden that the majority of musicians I've known have worked with their hands at the same time. If you watch the video of my son playing in a pick up combo of his father's friends, there's a General Contractor/framing contractor and a shingle sidewaller turned cabinetmaker in there along with me, who is a -- well, whatever I am, I fit in there. Only the drummer was an academic -- a college professor. If he didn't show, Lumpy the plumber would take his place, so we could have gone the whole megilla if we wanted to.

We were the opposite of the stereotype. We weren't frustrated musicians working menial jobs waiting for our big break in music. We liked our day jobs and played music for a little money and some laughs. Only the contractor types were worth a damn anyway, as far as music. A real music job is very much like a building contract. You have to plan, and show up on time, and stay sober, and understand the logistics of the equipment. You have to be able to set up and repair your broken tools on the spot. You have to work closely with others. You have to figure out in advance what the customer wants, and deliver it skillfully. There's a great deal of heavy lifting, generally at two AM in a sketchy neighborhood. You have to work whether you're sick or not; the only serious injury I've ever had since becoming a wood butcher was a chisel stuck to the bone in the meaty portion between the thumb and index finger of my left hand about a dozen years ago. That's the spot the neck of your instrument rests on. I assure you I was on a plane to Denver two days later to play with my hand wrapped like a mummy.

We had lots of guys come and go that had way more talent than many of us that stuck. Talent don't matter all that much. You gotta show up. That seems to be hard for artiste intellectuals to understand.

I see the Carpenter Poets, and I see many things. Above all, I know they'll show up and the poems won't be half done. Their performance won't be a sneer towards the listeners because the performer thinks they deserve a better class of audience. It will be real, and real is hard to come by in this world, and precious.

I feel better about the world knowing the Carpenter Poets are in it, doing the two things in this world worth doing to me. I feared I was a brontosaur, and there's a comet in the night sky. 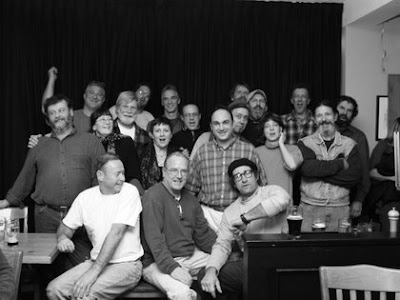 The Carpenter Poets.
Posted by SippicanCottage at 7:28 AM

Email ThisBlogThis!Share to TwitterShare to FacebookShare to Pinterest
Labels: arts, Bits of my life pulled out and flung on the Internet floor, home improvement, shameless commerce, woodworking

I believe in the creativity of humans. It is in all of us.
Sadly, it is often hidden or not recognized or discouraged.
Bravo to these folks who celebrate what they do for a living, from the heart and which is a beautiful art form in itself, by exploring another area of creativity and art. Bravo!

Poetry is life. Life is poetry.
And, you, sir are a poet of the first order in all that you do.

And God help you if they show up with a drummer who's working on his music degree in college.