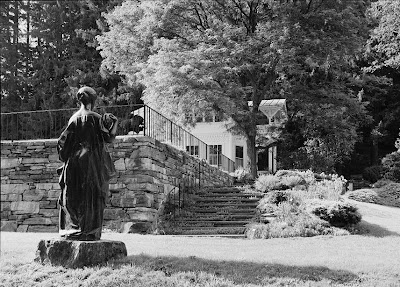 To read Some Enchanted Place from the beginning, click here and start at the bottom
I turned back from the lack of Immaculada and gave my nemesis a good, hard stare. He'd delivered his line, but there was no mirth in it. His expression never changed. You could have put him in a window to sell a suit. He was a snake with a conspicuous bulge in the middle -- not hungry right now. Still a snake. Always a snake.

I crossed a line just there. Angel was right; this place was some sort of mundane house of horrors. Not quite right. They tore the tags from mattresses, or were cannibals -- or something in between, most likely. You could smell it on the breeze in the dooryard, a whiff of padlocked orphanage ablaze over the horizon somewhere. But Pecksniff had gone beyond the beyonds. He'd gotten familiar.

Pecksniff was a toady, no different than me. He had trotted out the one-way camaraderie to shame me a bit. He was wearing another man's boots, but it was still on my neck. If we were any other place, I would have had to throw hands with him. Face.

My father told me he'd met Roosevelt once. Father was an old school Tammany Hall Democrat. He was slaving away at some defense plant and Roosevelt breezed through. Roosevelt clapped him on the back and called him by a singsong nickname, and told him what a swell job he was doing, asked him a question, turned his back on him without hearing the answer, and then disappeared in a cloud of flunkies.

Mom would always tell the story and the neighbors would ooh and aah and pop would glower. Once his friend pressed him on it, and I thought he'd explode. "No man has the right to treat me like a horse in a stable. I'll not be given a joke for a name and patted like a beast by a stranger. No man. Why in the hell did we drag our sorry asses halfway around the globe? Not for this. Not for this."

I knew the one-way familiarity when I saw it. Condescension masquerading as bonhomie. If my father had slapped Roosevelt on the back and called him Frankie in return, he'd have had his taxes reviewed twice yearly by J.Edgar Hoover, forevermore, while he was tied to a chair in Hoover's office, probably. I learned a long time ago to beware any authority acting like your pal. It rarely is. Pecksniff was poking me through the bars. I was the fly and he was pulling off my wings. It was no less than that, and I knew it, and he knew I knew it. We came from the same place, he and I. So it was fight or flee -- or grumble and take it, which is the most malignant kind of fleeing. Pecksniff knew there could be no fighting. I couldn't even raise my voice or I'd never work another job within driving distance of this pile of bricks again.

It was a contest now. Angel was smarter because he wouldn't play from the get-go, but I was in for a penny, so I had to go in for a Pound now. You'll not chase me out of here, you creepy drudge. I'll outlast you, you bastard, even if you call every person in every portrait on every wall in here back from the dead, and they climb down from the picture rail to pull at my sleeves while I work, and fill my dreams with dread.

I'll pull up to the front door, Pecksniff. The front door. And I'll take Immaculada out of here. I'll spray you with peastone and we'll wave to you like Roosevelt from a car. And someday, when you're dead, we'll come to your funeral, and Immaculada will wear a red dress, and I'll throw rice in the hole you're fitted for.
Posted by SippicanCottage at 8:58 AM

I was wondering if we were being introduced to the future Mrs Sippican... otherwise, that description could lead to a certain amount of, shall we say, domestic disharmony. And the occasional frying pan.
Unless it's just total BS. Irish and all.

...been waiting for this.

The best yet! We're turning a corner, I think.

Any chance of this continuing?

I know you are moving, and in difficult times, but I crave more of your writing.

Anonymous- I'll return to it. My new house does not have running water, heat, or indoor plumbing, so it might be a little bit.

Thanks for your kind words, and for reading and commenting.