The Future Of The Internet Is A Blackboard 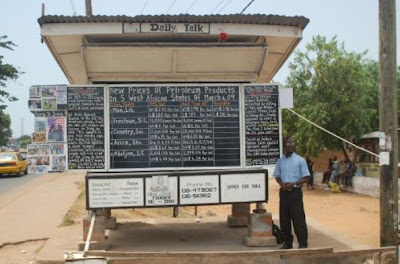 (Photo from AfriGadget)
I don't write a blog. I hate the word. I sorta hate the concept, really.

I'm not sure what I'm doing. I was doing it before I knew there was a blogosphere. I liked the interface and jumped at it when I saw it. I write essays, I guess.

I thought it would be a new, interesting and destabilizing force in publishing. It would sort of democratize things. Everyone had a foot in the Internet door at birth all of a sudden.

It didn't work out like I figured. It certainly has upset the applecart of the monolithic media. The newspapers are drowning in front of our eyes. There's a reason for that that not many people understand.

It's true that the Intertunnel is killing print, but it's suicide, not homicide. The newspapers are not doing the only thing that will make them indispensable to the public, and so they are dying.

The news in the newspaper, and broadcast TV news, was just the come-on for the true reason the proprietors of those institutions existed. They got all the manna you could cadge out of holding information hostage so they could get their opinion higher up the totem pole of public discourse than anyone else.

I don't like seeing the glee among many observers that accompanies the daily layoffs in the newsrooms of the papers. These are real people, most not very wealthy, and their lives are wrecked because the owners of the paper don't care if they are the equivalent of Martin Bormann in the bunker -- so enthusiastic about the proximity to, and the effect on, the exercise of real power that they don't care that in a little while they'll have to bite the cyanide ampule themselves. Let's have a care for those mowed down that don't have a triple-barrelled name and a trustfund, shall we?

The New York Times sells their building and their jet and lay off thousands who are just doing their job, but they pay hundreds of thousands -- millions -- to keep the Op-Ed page going, and the bigshot managers in caviar at their Long Island Gold Coast getaways.

All I can get on the Internet is opinion. It's an enormous sea of opinion. Everyone is doing for free what Maureen Dowd wants to earn a phone number for. That can't last. But they'll sacrifice the entire news operation on the altar of opinion to keep it going to the bitter end

The democratization of opinion would tell a normal person in a position of authority at a newspaper to abandon opinion and put factual information first, last, and always in the paper. And maybe not print it, just offer it in pixels. They refuse to do it, because of the Martin Bormann syndrome they've got. They'll fire everyone but never give an inch, because it's not exciting enough for them to be useful; they want to matter, and disproportionately so.

This man is the future of information:

A man with a chalkboard in Liberia is smarter than Pinch Sulzberger.
Posted by SippicanCottage at 10:22 AM

Opinions. My opinion? You didn't ask? Anyway: A funny thing happens whenever a long-established good thing starts to go down - a good many of the people who have no financial interest in that thing tend to cheer its demise. It's kind of like they do it "just 'cuz," and "who's the bigshot NOW, Mr?"

Well, there's more to it than that (maybe) but these are just comments.

I do believe you nailed it. I don't like to see the newspapers close down but until they start reporting the facts and letting me make up my mind, then I won't bother with them. When I read articles that just make no sense or that obviously aren't giving me the whole story or that I knw are just wrong then that tells me the reporter is not doing his job or the editor is not. I have friends who have been interviewed at length and the interview was taped. Later when they read the article from the interview it bears almost no relationship to the interview and the facts are wrong. And then what recourse does the interviewee have. He can beg and plead with the editor to get a correction out there but it will appear on page D-18 in the bottom right hand corner and be part of another article or a series of corrections.

I like that your guy is out there in public standing right there with his news. He is there to be held responsible for its accuracy. Never happen with Pinch and his buddies.

This time you are wrong. All 'news'paper people must go. Hahahaha.

If there was any longer a paper I could identify with I would happily buy it as the physical act of reading a daily is one of lifes pleasures,wether the news is up to date or not.The papers all however seem to be singing the same tune,one to which I don't know the lyrics.

A fussy detail but before you go and call it the Martin Bormann syndrome, its worth bearing in mind that Bormann got himself out of the bunker and then disappeared.Goebbels ,who slaughtered his entire family because he did n't want them to live in a Hitler-free Europe, more exactly fits the bill.

There's one thing that the internet will never top a print newspaper on and that's a good crossword puzzle.