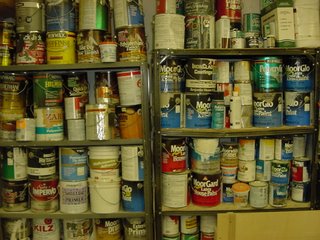 [Editor's Note: If you just stumbled in, we're redecorating the master bedroom in a day and a half. ]
{Author's Note: There is no editor, and this is a re-run from two years ago}

It's hard to know what to keep these days. Most stuff you keep is worthless. You store it your whole lives and then your children put you in a home or a box and buy two dumpsters and whoops! It's all gone.

My parents were children in the depression, and some of their pack-rat instincts linger in their children's genes. Maybe that's why I like Dean Martin records. No, that's Rat-Pack instincts. That's different.

What I mean is, poor people collect stuff. It's wealthy people that are always droning on about achieving a zen-like simplicity in their affairs. They know they can cash a dividend check any time they want and buy a sailboat. Poor people always have, in the back of their minds, the niggling suspicion that _____ is the last ______ they're ever going to see, so they better save it. I've succumbed to that urge myself.

I'm not as bad as my forebears, but I'm bad. It manifests itself in saving building materials with me. I've gotten better over the years, and the further removed from the Jimmy Carter presidency I get, the more sanguine I am that any given meal I get won't be my last.

I've still got a lot of usable paint left over from when I was a contractor and bought it by the tympani load. So rule number one: let's not go to the store and buy anything is made possible. Let's make paint. 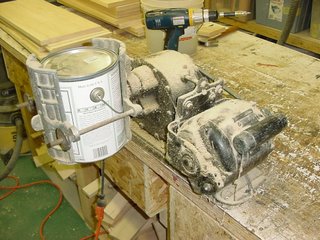 You have a paint shaker that dates from the Warren G. Harding administration, don't you? Makes things much easier. OK, here's what you do. Pull all the flat, or very low sheen latex wall paint off the shelf. Find something that looks vaguely the color you want, but way too light. Just make sure you have almost enough to do the job right right from the get-go.

The bedroom walls are a sort of light buff color, with vertical stripes in a sort of light rose. The stripes are ragged. Not "ragged" as in Raggedy Andy, "ragged" as in "applied in a broken color glaze with a rag." The wood trim (there's a lot of it) is painted Ben Moore Antique White, a sort of pale, pale peach off-white. It's kind of like an Edwardian drawing room motif.

Instant decision: It's going to be dark. Green. Warm color though, nothing acid. Not all the way to the olive everybody loves these days that will depress them in a few years. But a quiet, sort of somber green it is.

I've got a gallon and a half of light blue, a sort of watery sky color. Hideous. Let's use that. Dump it in a five gallon pail after you shake it. If you don't have a paint shaker, I'll wait four weeks while you stir it with a paint paddle. That metal rod you see in the bucket is a heavy wire doogizmo you can chuck in your drill and speed things up. But you'll have Charles Atlas forearms if you stir it all by hand. Your call. 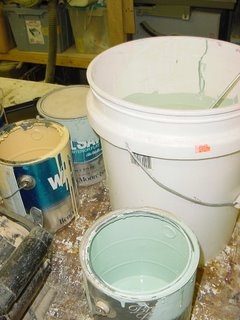 OK. Let's say OK again. OK? Right. Now, let's make the blue into green. You were in kindergarten, what do you add? Yaller is right. I've got a half gallon of screaming margarine yellow there, left over from Ray Charles' house, so let's dump that in. OK, it's green now.

A dreadful, toothpaste green. Now what do you want to do?

This part's easy. We're angling to put a deep magenta red club chair in the room eventually, and we're going to make sure it works in there right now, colorwise. I scan the rows of paint, and come up with a gem: Number 5 base means it's as dark as a politicians heart. I scan the pigments written on the side. This will do. Super dark cranberry red. It matches the fabric on the chair fairly closely. I dump half a gallon into the toothpaste green.

There are only three colors; red, blue, and yellow. We're throwing in the third now. The red and green are opposite one another on the color wheel, so they make a kind of mud brown, and calm and darken the thing right down. The yellow we chucked in is based on an earth yellow, not a nasty chrome yellow, so the warm tone stays, and makes the whole thing into a regal, calm, strong green. No one will ever know the red has been added, but the chair will magically look great in front of the wall. You'll see. I've got two and a half gallons of it all together now. Plenty.

Now we must name it! Hmm.

(To be continued tomorrow)

Posted by SippicanCottage at 7:01 AM

This may qualify as "Starting," so that whole "between sunset on Saturday afternoon and sunrise on Monday morning" thing is kind of shot.

Oddly I DO have a huge paint collection. Now to actually stir some up....