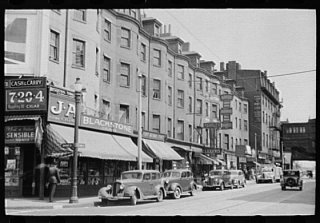 You know the places that end up in movies. Los Angeles and New York and Chicago and Miami and did I mention New York and Los Angeles? Hell, nowadays it's Toronto more often than not because it's cheaper to film there. The Farrelly Brothers have a sort of Providence, Rhode Island franchise going now, but that's just a cool icy rock orbiting around Boston.

Let's have a list, shall we? VERY BOSTON MOVIES.

Sorry, wrong area, wrong movie. The only rules are that the movie encapsulate the local vibe here, with bonus points for local sights and extra special bonus points for successfully attempting a local patois; or more likely to be efficacious: avoiding attempting a local patois without drawing attention to yourself. John Ratzenburger need not apply.

Let's make it an even ten:
10. The Thomas Crown Affair- It's a lousy movie, really. But it absolutely looks like Boston and environs in the sixties. It's mostly of places the vast majority of working class people in Boston never dreamed they'd be allowed to sweep, never mind mingle at, but what the hell. Faye Dunaway eventually married local favorite and J Geils Band frontman Peter Wolf. Steve McQueen wisely avoided attempting a cultivated Boston accent. His face would have broken.
9. The Boston Strangler - When I'm done with you, you're going to figure Boston is the most depressing place in the world. Let's get the mass murderers out of the way, right away. Albert DeSalvo sums up the crime in Boston forty years ago: There's plenty of it, and we have no idea what to do about it. My friends and I always do imitations of Tony Curtis in Spartacus and The Vikings, talking like, well, Tony Curtis the whole time. Yondah is da cassool ov my faddah. He makes a surprisingly believable weirdo murderer, which might tell you something. All kind of Boston area in there.
8. Tie
7. Tie
Paper Chase
Love Story - You know, before Al Gore invented the internet for me to make fun of him on, he went to Harvard where the Socratic Method is used and had the greatest love story ever told about Ryan O'Neal based on Al's life. Some persons who are of a more skeptical bent than I doubt the likelihood of these happenings. I don't. Al Gore is just as big a self-absorbed and shallow jerk as the people portrayed in these movies. Enjoy.
6. Jaws- Boston's no where near Martha's Vineyard, where they filmed this thing, but who cares? Everyone in Boston goes down Route 3 every Friday in the summah and goes to the crummy cold beaches on Cape Cod. Who cares? They don't go anywhere near Martha's Vineyard, which is just a pile of rocks and t-shirt stores out in the Atlantic. Who cares? No one has a Massachusetts accent of any kind in this movie. Who cares? They caught that tiger shark, the one they hang up on the dock and do an impromptu autopsy on, off Montauk -- and that's Long Island! Who cares? It's a good movie. The only part that strains credulity is where they get all those people in the water at the beach. On Memorial Day. Try it. There'll be some shrinkage.
5. The Last Hurrah -Not much Boston to look at in it, and they changed everybody's name, of course; but you're never going to understand Boston until you understand James Michael Curley. Curley the mayor used to get kickbacks from contractors for public works projects. Once, a highway overpass collapsed, and his "partners" were in trouble. Asked about the calamity, hizzoner calmly remarked that it appeared to be "an injudicious mixture of sand and cement." Anyone surprised that the Big Dig tunnel fell in on some poor woman and crushed her to death must be new around here.
4. Charly - Made that street in South Boston famous. It didn't help. The trajectory of every poor Boston schlub: Born dumb, get a little education, lift your eyes up from the mud to gaze for a moment at the bright horizon, and then land face-first back in the mud again. They blame it on mental retardation in the movie, but I think it's the Guinness, myself. Triple points for the scenes in the Kasanof's bakery.
3. Good Will Hunting -There is manifest affection for the whole of Boston and Cambridge in this movie. It's silly, but who cares? They understand the local zeitgeist. Around here every airhead thinks they're a genius, so why not run with it? I punched my fists right through the drop ceiling in my basement room when Fisk hit that home run. A sterling moment in an ultimately losing effort (The Reds beat us the next day to finish it.) -- yeah, that's Boston. Lose proud. I've heard rumors that Robin Williams is a skilled mimic. Where did he find a mentally challenged Vermonter to imitate for this one? One of life's great mysteries. Gives Cliff Clavin a run for his money for crash and burn attempts at Bawstin Tawk. And Will is always on the wrong train. No wonder he doesn't show up on time for work very often.
2. The Verdict -Sidney Lumet made this movie, and you could see he hates Boston. He even drags the characters to New York City for no discernible purpose; maybe he wants to get decent deli or something, which is impossible in Boston. David Mamet's screenplay has people saying very Boston things. The seedy bar where Newman hangs out across from the common is perfect. Pre-Cheers Boston was just like that, trust me. Newman doesn't even attempt an accent, thank god, but Milo O'Shea, the judge, is the ne plus ultra of the successful rogueish Irish twang. The whole mess of a proud city gone to seed is in there; the scene of trying to pull a grip and grin at a funeral is very Boston -- it's usually a politician, though, not a lawyer. They even got the Sarni dry cleaning bag hanging behind Newman while he slurs his words into his apartment phone exactly right.
1. The Friends of Eddie Coyle -Everything about Boston is small-time, except our egos. Small time crooks with small-time concerns and small-time dreams drift around a bunch of small-time Boston area haunts. Robert Mitchum tries a mild local accent, and doesn't sound like he's from Nebraska. The bowladrome's still there; the Garden's gone.

Honorable Mentions:
Moby Dick - We're all that crazy in New Bedford.
Malcolm X - I was born in Dorchester, too, but I'm keeping my last name, thank you.
The Last Detail - They're all drunk in Boston, for a while. Aren't we all?
The Brinks Job - Looks like old Boston, sounds like old Peter Falk.
State and Main - Supposed to be New Hampshire, I think; screams Manchester-By-The-Sea to me.
Outside Providence - That's where Massachusetts kids go to meet girls with big hair, when Saugus is too far to drive.
Posted by SippicanCottage at 8:27 AM

Don't always comment, but boy, do I love your posts. One day I'm moved to tears and the next, like today, enjoying your wicked sense of humor.
Especially liked the comments on 7 & 8, the two movies that tied.

Boondock Saints was a good Boston movie. I don't know if it was filmed there. The accents were more Irish and Bronx Italian.

Boondock saints was primarily filmed in Toronto; but there were a lot of exteriors and atmospheric shots in actual Boston locations.

I think more telling is the recent fad for setting TV shows in Boston.

The best Boston movie recently has got to be "The Departed"; even if it does have that poncey git Leo DiCaprio.

The guy who wrote the screenplay was my fifth grade math teachers son. Several of the characters were pretty clearly based on people I know, and/or am related to. My great uncle was Chief of SID for a few years. Another great uncle was chief of deputies for Suffolk County sherrifs. Cousins, uncles etc...

My dad and grandfather were both ... ssociates... of the good Mr. Bulger (actually, both of them).

I watched the whole movie thinking "shit, I know that guy".

Oh and "Friends of Eddie Coyle" is one of my favorite movies of all time.

Patsy, thanks for reading and commenting.

Chris-I must admit I wrote this before The Departed existed. I'm like you, in that many of my relatives were and are police and firemen and so forth in and around Boston. You can find all these strange juxtapositions in their photo album. My aunt was showing my pictures once, and she's got one with her, Mike Dukakis, and Robert Urich. What's this, I ask? "Lunchtime."

People either "get" Robert Mitchum or they don't.

Did you see this recent article in Slate about "Ben Affleck's Boston?"

Hi Alison- No, I missed that, but like a true friend, you supplied a link.

I'm still trying to get over the idea in the article that Ben Affleck did a "spot-on" South Boston act. Cambridge showed right through him at all times. He didn't think he had to work at it because he was from around here, or he's not capable of it, but he didn't do too much better than Robin Williams if you ask me.

Full disclosure: I wrote the list more than a year ago.