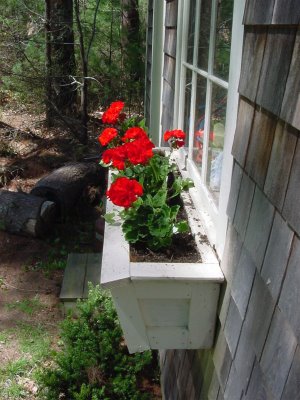 We have a tradition here at the Sippican Cottage. And the tradition has been born and tweaked and upheld for over a decade now, and has offered me a perspective on what tradition really means, if only in a small way.

Neither my wife or I had any idea what to do in a garden when we were first presented with the miserable patch of ground outside our exurban door. Our childhood experience was suburban, but our families, like most suburban families of the last generation, were essentially of the urban mindset, if not location. They moved from third floor walkups to suburban ranches, but there was more than a little bit of the rented flat about them forever.

My own father was not a gardener, by any stretch. He mowed the patches of wan green in between the vast stretches of brown on our lawn like a good citizen, but that's as far as it went. He always had the air about him of a man who should have a newspaper and a pot of tea on a table surrounded by cobblestones -- he's no farmer.

My mother is much more adept in the garden, but I got none of it. There was always something of the urban in her gardening too; more windowbox gaudy than sedate pastoral charm. I was of no use to her as a child, and only learned the simplest things about planting: mix dung and peat in the hole and water it. It was enough, in a way.

The mass of books I looked at, the ones with nothing but pictures, had the whiff of the fast food restaurant to them. The old advice: "If the menu has pictures of the food on it, it's not likely to be haute cuisine" applies to gardening as well.

There's a kind of cognitive dissonance to most gardening in the suburbs, because the whole layout of the houses and the surroundings is flawed, generally, and the visual confusion it engenders leads to a kind of Home Depot delirium tremens in landscape design as well. The home might be put on a kind of country manor house lot, but looks like an urban design, or a home that belongs in a desert is stuck in a jungle, and so forth. Fill in your own stucco nightmare here. A sort of incoherence seeps into the proceedings, garden included.

We've murdered enough plants to get Gaia knocking on our door with a mob of woodland nymphs with pitchforks and torchs, while we tried to figure out what to do, where. But while we are not born wise, we learn -- if haltingly -- what works, and what looks appropriate, and what helps to blur the distinction between in and out, and porch and lawn, and lawn and woods, and woods and world. Just between you and me, the books without the pictures help some, but the beating the world gives you trying desperately to grow things is the real education. I'd skip the Feng Shui picture books altogether, if I were you.

So every year, we put the geraniums in the pots on the front step, and in the window box on the shed, with some vinca vine to trail down and wave hello in the breeze a bit. We divide the hostas and put them around the yard, in the shade, here and there. We tend to the rhododendrons and barberrys we had the presence of mind to plant in the right place a decade ago, getting dividends we earned the hard way which almost banish the cruel thoughts of all those shrubs that did not survive an immediate razoring to the ground by hungry deer. We mow the grass in gentle curves, as nature intended, not laid out as if by laser like a farm plot. We hang a few dipladenias outside windows we want hummingbirds to favor, and we steal the tall phloxes' freeseeded progeny and the bottomless well of pachysandra one plant provides, and we know it will work, and we know how to work it. We caress the lamb's ear to remind it to carry on. We leave great swaths of our property wild, and only clean out the buffer between, a little, to provide the transition.

Tradition is a kind of faith; you trust it will work because you trust it will work. I bet many traditions, like ours, are born every day. Sometimes you wish that someone could have told you what to do, instead of having to figure it out yourself; but would you have listened anyway, if the book did not have pictures?
Posted by SippicanCottage at 9:57 AM